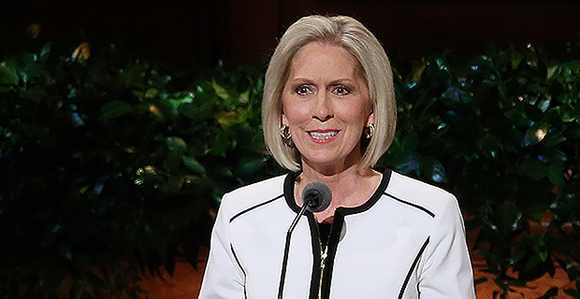 “The kingdom of God is not and cannot be complete without women who make sacred covenants and then keep them, women who can speak with the power and authority of God.” —President Russell M. Nelson

With the general women’s session of conference to be held on the evening of October 6—between general sessions of conference on Saturday and Sunday—women around the world are looking forward to gathering together to hear from their leaders.

The First Presidency announced in October of 2017 that the general women’s session of general conference—normally held the weekend before the general sessions of conference—would be held annually in the fall.

“In the spirit of reducing and simplifying the work of the Church and the demands made upon leaders and members, we are pleased to announce that the Council of the First Presidency and Quorum of the Twelve has decided to modify the general conference meeting schedule,” according to the announcement letter to Church members signed by the First Presidency last year. (See related story.)

In 2013, the announcement came that all women—8 years of age and older—would meet together in a consolidated meeting.

While the meeting schedules have changed over the years, women have been a part of general conference beginning in 1845.

“We come from a long line of Latter-day Saint foremothers who bore witness of the Restoration of the Church of Jesus Christ,” said Jenny Reeder, Church historian. “The well-being of the restored Church depends on the voice, visibility, and value of women as companions to men, Relief Society and elders quorum, the complete priesthood.”

At the age of 70, Lucy Mack Smith, mother of the Prophet Joseph Smith, delivered an address in the Nauvoo Temple.

“On October 8, 1845, the last day of the three-day conference, Smith requested the podium to respond to the discussion about moving west,” according to At the Pulpit: 185 Years of Discourses by Latter-day Saint Women.

According to the Times and Seasons, the Church’s newspaper, Lucy Mack Smith “spoke at considerable length, and in an audible manner, so as to be heard by a large portion of the vast assembly.”

She spoke of her family, testifying of Joseph’s role as the prophet of the Restoration, and offered advice.

“Well, Brothers and Sisters, I have been looking around upon this congregation,” Lucy Mack Smith said. “I have long been waiting for the time when the Lord would give me strength to look upon you and my children. I feel solemn. I want everyone to look into their hearts to see what they have come to this place for, whether they have come to follow Christ through evil and good report or for any other cause.”

She also shared her testimony, expressed her beliefs, and recounted events from Church history.

“The Saints had great admiration and respect for Lucy Mack Smith and called her ‘Mother Smith,’ as if the title referred to the Mother of the Church,” said Reeder. “From the beginning, she was a strong woman who influenced her family to ‘seek religion.’ She was never afraid to expound and exhort, as the Lord counseled Emma through Joseph in Doctrine and Covenants 25.”

That address became the first account of a woman speaking in general conference.

“Lucy’s writing and speaking reveals a very deep and intimate knowledge of the Bible and Book of Mormon,” said Reeder. “She knew the people and their experiences, and she knew the doctrines.”

Her participation, both with Church history and in her address at conference, have left a lasting impact on the Church today. That participation reflects the important role women in the gospel have today.

“She believed that a loving Heavenly Father does not change, and if He could deliver people then, He can certainly do now in our day,” Reeder said. “This practical application of scripture to personal experience proves Lucy to be a sister scriptorian and a vital voice and leader for all Latter-day Saints.”

Many Church leaders have encouraged women to be like Lucy Mack Smith—a “vital voice” and leader.

Spencer W. Kimball’s October 1979 talk “The Role of Righteous Women” encourages women to reflect righteousness and articulateness—that they will be a “significant force” in the Church in the last days.

Sister Sharon Eubank, First Counselor in the Relief Society General Presidency, encouraged women to be articulate in her talk “Turn on Your Light,” saying, “Each of us needs to be better at articulating the reasons for our faith.”

In 2015, President Russell M. Nelson requested that women stand up and speak out. “We need your strength, your conversion, your conviction, your ability to lead, your wisdom, and your voices. The kingdom of God is not and cannot be complete without women who make sacred covenants and then keep them, women who can speak with the power and authority of God” (“A Plea to My Sisters,” Oct. 2015 general conference).

“We are those women,” said Reeder. “Even if we do not speak in general conference, we speak in our wards and stakes, in Relief Society, Primary, Young Women, Gospel Doctrine, and ward council. We speak in our homes and to our neighbors and coworkers.” 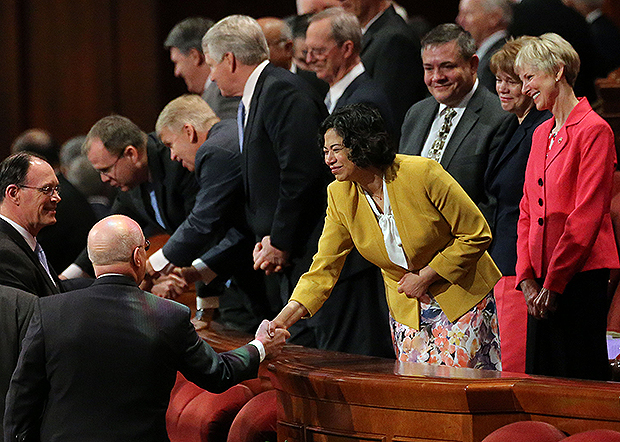 Elder L. Whitney Clayton of the Presidency of the Seventy shakes hands with Sister Reyna I. Aburto, Second Counselor in the Relief Society General Presidency, after the Sunday morning session of the 188th Annual General Conference of the Church at the Conference Center in Salt Lake City on April 1, 2018. Photo by Kristin Murphy, Deseret News. 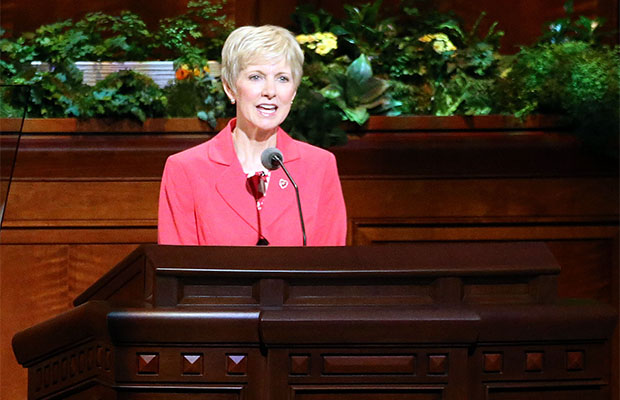 Sister Jean B. Bingham, Relief Society General President, speaks during the Sunday afternoon session of the 188th Annual General Conference of the Church at the Conference Center in Salt Lake City on April 1, 2018. Photo by Kristin Murphy, Deseret News. 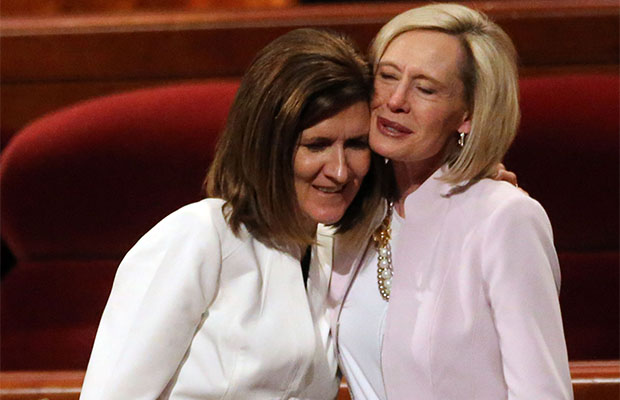 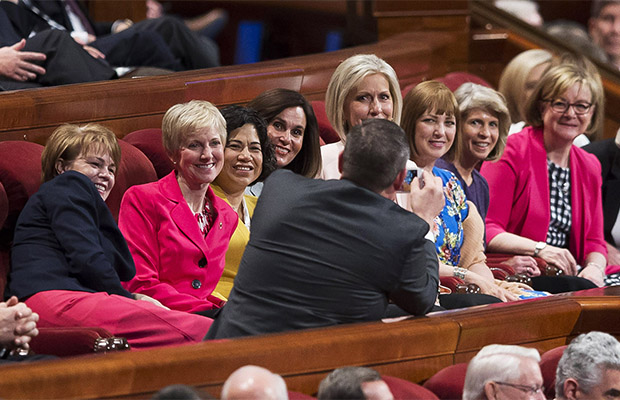 Brother M. Joseph Brough, Second Counselor in the Young Men General Presidency, takes a photo of the Relief Society, Primary, and former Young Women General Presidencies prior to the Sunday afternoon session of the 188th Annual General Conference of the Church in the Conference Center in Salt Lake City on April 1, 2018. Photo by Scott G Winterton, Deseret News. 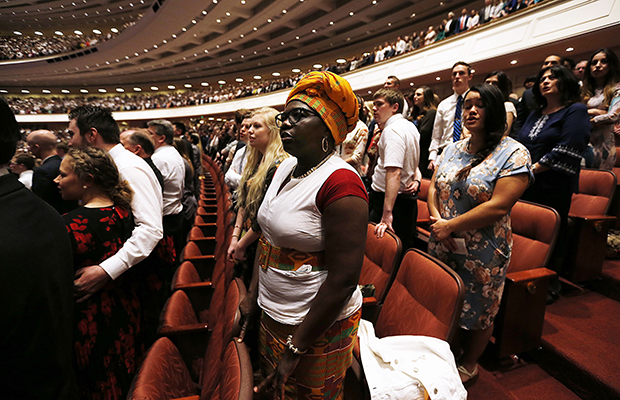 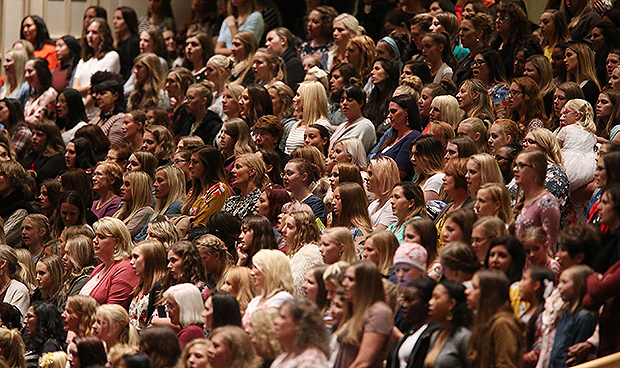