The typical bollerwagen served many thousands of German refugees, including displaced Latter-day Saints, in the last years of World War II.

“I didn’t have a clue that there were so many faithful Latter-day Saints in Germany during the war” —Jay A. Parry, writer and editor, Church History Department

“I didn’t have a clue that there were so many faithful Latter-day Saints in Germany during the war,” said Brother Parry in his June 13 presentation for the monthly Men and Women of Faith Lecture Series sponsored by the Church History Library at the Assembly Hall on Temple Square in Salt Lake City.

“The Church was quite strong in Germany before the war, and it’s sad and instructive to see what happened to the Church during the war,” he said. “But it’s also interesting to see the faith with which the Saints bore with impossible trials.”

Brother Parry, a writer and editor in the Church History Department, spoke on the topic of LDS women in East Germany during World War II.

He recounted a story that occurred near the end of the war. Many Church members in the eastern part of the country were fleeing as the Soviets invaded.

“One of the people who fled was Sister Margarethe Hellwig, who went with her daughter Gudrun. They went toward the Baltic Sea and ended up in a big line of people in very cold weather trying to get on a ship.”

They felt blessed to board a huge craft called the Wilhelm Gustloff, finding a comfortable and warm place near the engine room.

“As they were waiting to depart, all of a sudden Sister Hellwig had this terrible feeling come over her, and she said to Gudrun, ‘We’ve got to get off this ship.’ ”

The daughter protested but the mother persisted. They caught another ship and, several hours later, looking across the Baltic, saw the Wilhelm Gustloff as it was hit with torpedoes from a Soviet submarine. Of its 10,000 occupants, almost 9,000 perished.

“Sister Hellwig was quite confident that she likely would have suffered death with her daughter if she hadn’t followed the Spirit,” Brother Parry said.

He spoke generally of conditions in Germany and the Church. There was strict rationing of food, clothing, and fuel, and nearly all the men were gone, either drafted into the army or pressed into government service. 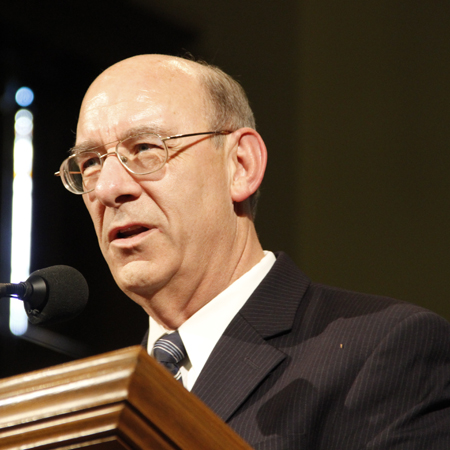 “Imagine the effect that this had upon the programs in the branches of the Church,” he said. “Their programs were greatly hurt by the war and the resulting conditions.”

“In the Königsberg Branch, Maria Berger and her daughter were at home during an air raid. They sought safety in the basement. Maria described what they saw when they emerged: ‘We stood in total shock by the smoldering ruins of our house. In the rubble we found a small, engraved plate from our piano, the only sign that we once lived there.’

“And then she concluded her reminiscence with these very impressive words: ‘We cleaned up and went to church.’ A family in the branch took them in that day.”

Brother Parry told of Karola Hilbert, who was out in the countryside collecting food for her family on one occasion during the war. She needed to get back to the train depot to return home. But she saw a group of Russian soldiers congregating on the road, the only way to the depot.

“She knew for sure they would either kill or rape her, and she didn’t know what to do except one thing her mother taught her. She backtracked a little ways and found a private place and prayed.”

She asked that she would be made invisible to the soldiers.

A branch outing in the early years of World War II in Germany gives evidence that nearly all men were either drafted into the army or pressed into government service.

“In faith, she walked right up to where the soldiers were,” Brother Parry said. “She walked right through them. They were so close to one another she brushed their shoulders, and it was as though she wasn’t there. Heavenly Father answered her prayer.”

In late April 1945, he said, about 30 members of the Church took refuge in an LDS refugee colony in Berlin, a partially abandoned apartment building that also housed the East German Mission home. Three miles away, Ingrid Bendler, a young Church member, discovered an abandoned warehouse full of food that had been opened to the public. She felt the urge to deliver food to the mission home for distribution to the starving Saints there, but her mother expressed concern about her safety. Nevertheless, she felt the urgent need to go.

It was hard to ride with her bicycle loaded with food, and as she rode through the streets of the city, she could hear shooting and see fires everywhere. Not knowing which streets were safe, she listened to a “still, small voice” and made her way over broken bridges and through unusual places.

“To my great surprise, I found the mission home real easy,” she wrote later. There were thousands of Mormon refugees during the war, Brother Parry said. Many used a conveyance called a bollerwagen. With the men absent, the women would pull these little wagons with what possessions they could fit into them, he said. “Some of them drew a direct connection between themselves and the handcart pioneers. They said, ‘We’re like them.’ ”