“What a great time to be a woman in the Church where our voices are needed and valued more than ever.” —Bonnie L. Oscarson, Young Women general president

The First Presidency and Quorum of the Twelve Apostles have appointed three Latter-day Saint women to serve on general councils that establish policy for the Church.

“We are confident that the wisdom and judgment of these general auxiliary presidents will provide a valuable dimension to the important work accomplished by these councils,” the First Presidency wrote in the letter. 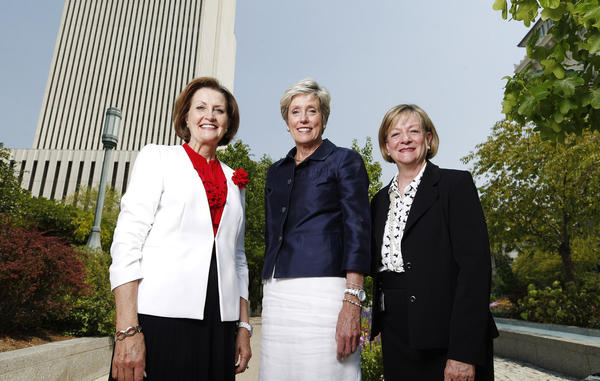 Sister Oscarson wrote on her Facebook page on August 18 that she still remembers President Monson announcing the lowered missionary age for young women in the Church.

“Today I witnessed another significant moment—I received an invitation to participate as a member of the Missionary Executive Council. I am honored.”

Sister Oscarson said that she and Sister Burton and Sister Wixom have each received assignments “to one of three key councils of the Church, each led by members of the Twelve.”

“What a great time to be a woman in the Church where our voices are needed and valued more than ever,” wrote Sister Oscarson. “I am grateful for the opportunity to add my perspective and experience to this council as we work together to spread the message of the restored Gospel.”

“It is with a thankful heart that I have been appointed to serve on the Priesthood and Family Executive Council,” wrote Sister Burton on Facebook. “Good men and women of the Church throughout history have worked together to build a strong foundation for Christ’s restored Gospel to flourish and give hope to a world that is so often without light. It is now more important than ever that we stand together and follow Heavenly Father’s plan to bring His children home.”

Of her assignment, Sister Wixom wrote on her Facebook page:

“Primary children sing 'I Love To See The Temple.' Some children even research family names and index. They love to listen to stories about the temple and their own ancestors. It gives them a sense of belonging and reinforces in their hearts the goal to remain steadfast in the gospel and attend the temple one day. I know that the truths we teach our children are those that remain in their hearts as adults, which is why I consider it a special privilege to now serve on the Temple and Family History Executive Council.“

Elder Dallin H. Oaks of the Quorum of the Twelve Apostles also added on his Facebook page a statement of support for the women leaders and their new assignments.

“I was very pleased to read Sister Bonnie Oscarson’s Facebook post about the new assignments of our women officers to the three general priesthood councils,” wrote Elder Oaks. “We need their wisdom and participation! It is sensible that their assignments line up with their current responsibilities.

“Sister Oscarson will serve on the Missionary Executive Council at a time when the Church has an unprecedented number of missionaries, a great number of whom are young women. Sister Wixom’s appointment to the Temple and Family History Executive Council will help us teach our young people to learn about their ancestors.

“I was also very pleased to learn that the First Presidency has approved renaming the Priesthood Executive Council to the “Priesthood and Family Executive Council.” We know Sister Burton will give valuable insight in this new position as she represents women of the Church around the world.” 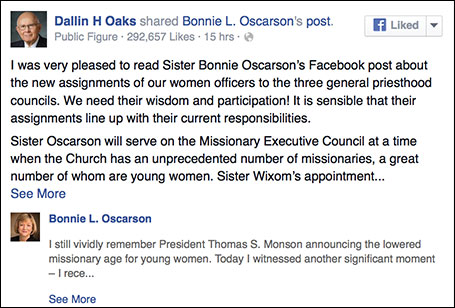