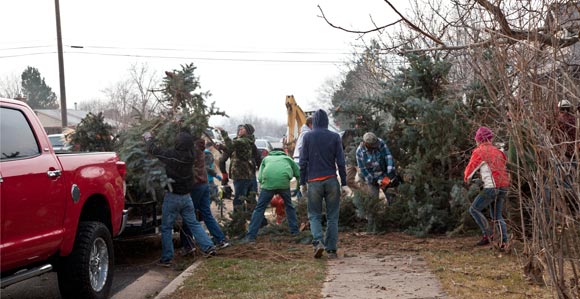 In Kaysville and throughout Davis County, thousands of individuals—members and nonmembers—spent most of Sunday, December 4, 2011, gathering debris following one winter storm and in preparation for another.

“By the end of the day the whole city was involved; it didn’t matter what religion you were. It was true religion.” —Cory F. Hanks, Bountiful Utah South Stake president

Throughout Davis County, Utah, USA, on Sunday, December 4, 2011, many LDS Church meetinghouses stood quiet and empty—the thousands of members who usually filled these buildings were working feverishly to clear debris from roads and yards in preparation for a dangerous winter storm forecast to hit later that day.

In Kaysville, 80 percent of the pine trees within the Kaysville Utah East Stake boundaries were uprooted. Many people lost power for up to four days.

But when an equally strong storm was forecast for Sunday evening, it became clear that this storm could easily be more destructive than the first. In hurricane-force winds, the now-loose debris could become projectiles much more easily than before.

Elder Steven R. Snow of the Presidency of the Seventy contacted Area Seventies, who relayed to stake presidents throughout the area the message that Church meetings could be abbreviated or canceled.

Members in the Centerville Utah Canyon View Stake met for sacrament meeting and then went home, changed into work clothes, and returned with chainsaws, trailers, and trucks, ready to go door-to-door to help, President Felt said.

“As I worked side by side with cleanup crews, I realized that fences came down, both literally and figuratively,” he said. “Everybody was in the cause together.”

President Hanks canceled meetings for each of the stake’s eight wards. Bountiful City mayor Joe Johnson agreed to open up the city's landfill, usually closed on Sundays, so that there would be somewhere to put all the debris.

Kaysville Utah East Stake president Douglas Richins explained the phenomenon that occurred throughout Davis County as people began to serve. “Each individual ward and stake began by focusing on itself, and then as those [problems] were resolved, they went to other nearby units to look for ways to help, and it just kept expanding.”

Stakes as far south as Orem, 50 miles (80 km) away, were calling to offer assistance. Local citizens were joining in. In many areas, the work that began Sunday morning was completed by early afternoon.

The line of vehicles waiting to dump rubble at the landfill stretched for miles, and many people had to wait 45 minutes to an hour to reach the front, where the National Guard was assisting in unloading.

In some areas, stake Relief Societies organized impromptu potlucks to serve hot chocolate and warm food to the thousands of volunteers and people who had been without power for days.

“It was the greatest thing you’ve ever seen in your life,” said President Hanks, whose stake alone had 500 volunteers. “By the end of the day, the whole city was involved; it didn’t matter what religion you were. It was true religion.”

As night fell, people returned to their homes in anticipation of the incoming storm, but it never came—winds topped out at 40 miles (64 km) per hour.

“If we hadn’t thought the storm was coming, I’m sure there would have been several weeks of service, but I think it would have been just local,” President Richins commented. “Having a focused effort to respond in an emergency really demonstrated the caring nature of people not just in their neighborhood, but to people they didn’t know.”

President Richins, along with many other Church leaders, expressed a hope that similar fellowshipping and service, regardless of boundaries, will continue.

“Several bishops told me that as people knocked on doors that were opened, walls came down, people responded, and afterwards, they joined in the service efforts,” President Richins said.

One of President Felt’s neighbors is a member who owns a disaster recovery business. Although his own home was damaged, he was out using his equipment to provide labor and materials free of charge to those who needed it.

“Another less-active neighbor noticed this and was so impressed that this man was taking care of others before himself that he spent two hours in this member’s backyard to serve him and give him the time he thought he deserved,” President Felt said. “That is just one example of the selfless attitude that we saw over and over.”

President Felt said he heard many people speak of realizing how fortunate they were.

“Yes, homes were damaged, but we were still standing,” he said. “As we cleaned and served, everyone was concerned with everyone else and not themselves. A challenge—a disaster—turned into a blessing in our lives.”

President Hanks said that although the preparation was for a storm that never came, he believed there was a reason for it.

“For us, the storms never came, but the entire community banded together and did glorious work,” he said. “There were no Mormons, no non-Mormons, just brothers and sisters working together. Everyone was blessed, tender hearts came to the surface, and testimonies were strengthened.

“The greatest story is it didn’t matter who you were, where you were from. It was a community of Christlike people getting together. It was pure service, pure religion, top to bottom,” he said.