Why Missions Need the Examples of Faithful Women

“I believe the wives of the General Authorities are an untapped resource that is incredible.” —Elder Brent H. Nielson of the Seventy

Editor’s note: In late 2019, the Church News followed two General Authority Seventies and their wives on mission tours and interviewed a third prior to his conducting two similar tours. See the related links to learn more. This article features the multiple involvements in a mission tour of the visiting sister—the wife of the visiting General Authority Seventy. Sister Marcia Nielson accompanied Elder Brent H. Nielson, the executive director of the Missionary Department, in touring the Tennessee Nashville Mission, while Sister Wendy Nielsen joined Elder S. Gifford Nielsen, an assistant executive director in the department, in a tour of the Calgary Canada Mission.

Sister Marcia Nielson stands in front of the full-time sister missionaries of the Tennessee Nashville Mission, most between the ages of 19 and 21. She leads a mission tour pre-meeting with her teachings and testimony, while her husband, Elder Brent H. Nielson, conducts a similar meeting elsewhere in the meetinghouse with the mission leadership council, composed of the assistants to the president, zone leaders, and sister training leaders.

Recalling her teenage years, when she was about the age of the young sisters she is training this day, Sister Nielson realizes she had an early exposure to the types of visits General Authority Seventies and their wives conduct in mission tours held annually throughout the world.

At the age of 17 in 1975, she accompanied her family to Santiago, Chile, where her father—the late Elder William R. Bradford—served as a mission president (he was called as a General Authority Seventy just months after becoming mission president). Sister Nielson remembers hosting Elder Bruce R. McConkie, Elder Boyd K. Packer, and Elder A. Theodore Tuttle in the Bradford home as the visiting authorities made mission visits in Chile. (Elder Craig C. Christensen, who is quoted in other articles in this package on mission tours, was a missionary in the Bradfords’ mission in Chile.)

“When I realized as the wife of a General Authority Seventy that I would have to participate in these types of visits myself, I was fairly apprehensive, because I knew it would require me to speak and participate.”

Sister Nielson sees her role in a mission tour as taking advantage of the opportunity to bear testimony of God the Father, His Son Jesus Christ, the gift of the Holy Ghost, and the Restoration of the true and living Church, as well as offering appropriate words of counsel and encouragement to the missionaries and the mission leadership couple.

Additional opportunities, she added, are “to participate as eyes and ears in witnessing what is happening in the particular mission and to add voice to the appreciation and love offered by the Church leadership and Missionary Department.”

Throughout this day in Brentwood, Tennessee—one of several days of a mission tour conducted by Elder and Sister Nielson in the Tennessee Nashville Mission in the fall of 2019—Sister Nielson joined Elder Nielson in teaching, training, and testifying while looking to uplift and edify not only the missionaries but the mission president and his companion.

It’s not uncommon for Elder Nielson, a General Authority Seventy who is the Missionary Department executive director, to emerge from one-on-one interviews with missionaries after morning and afternoon mission-tour conference sessions and find his wife, Sister Marcia Nielson, surrounded by a dozen or more other missionaries engaged in lively conversation.

Nor is it uncommon for Elder Nielson to learn that missionaries often remember the messages and theme of what Sister Nielson shared in mission tour meetings more than what he may have taught in the same session.

And that’s fine with him, as he recognizes the important role the women play in mission tours.

“I believe the wives of the General Authorities are an untapped resource that is incredible,” Elder Nielson said.

Wives of visiting authorities haven’t always traveled on mission tours in the past, just like they don’t always accompany their husbands at stake conferences or other travel assignments.

Elder S. Gifford Nielsen, a General Authority Seventy who is a Missionary Department assistant executive director, agrees on the benefits and blessings of being accompanied by his wife, Sister Wendy Nielsen, on mission tours.

“Wendy is a powerful teacher of doctrine, and she is a connector of people and a connector of hearts,” he said. “The whole key is to really connect with these missionaries and the mission president and his wife and to teach together and to lift a mission.”

The Nielsens conducted a tour of the Canada Calgary Mission in late October and early November 2019.

Joining Elder Brent H. Nielson and Sister Marcia Nielson in their September 2019 mission tour meetings and events conducted in Tennessee and Kentucky were Elder James R. Rasband, a first-year General Authority Seventy, and his wife, Sister Mary Rasband. The Rasbands were shadowing the Nielsons in learning about mission tours, as they are likely to be assigned to conduct similar mission tours on their own in the near future.

During mission tours, the presiding General Authority finds ways to best involve his wife according to mission needs, opportunities in the meetings, or promptings of the Spirit.

In the meetings held in Brentwood, Sister Nielson’s formal involvement included delivering a message in a general session, sharing a concluding testimony, and holding the aforementioned morning meeting for sister missionaries.

And in both tours, Sister Nielson and Sister Nielsen were active participants in advance planning sessions with the respective mission leadership couple and the presidents’ assistants.

Said Sister Nielsen: “Everywhere we have traveled we have met the most amazing leaders who are willing to leave jobs, family, and comforts of home to go wherever the Lord sends them in order to spread His gospel to all of His children everywhere.”

Sister Cindy Keung, companion to President Stephen A. Keung in the Canada Calgary Mission, said she relished Sister Nielsen’s love and passion for the scriptures, evidenced by how she taught from them.

“There is joy in her voice, her hands, and her face when she begins to expound the scriptures, which I find to be infectious and energizing,” Sister Keung said. “She moved so easily from one scripture to another, teaching and sharing her witness.”

In the Tennessee Nashville Mission, the Nielsens and Rasbands met with President Rhys A. Weaver and Sister Pamela Weaver, mission president and companion.

Sister Weaver said Sister Nielson’s involvement and example were beneficial to both her and Sister Rasband—especially seeing how the Nielsons taught in tandem and how easy it was to sense their love for each other and their love and dedication to the Lord.

“I loved her tenacity and her honesty,” Sister Weaver said. “Having her here I felt that both myself and Sister Rasband enjoyed how comfortable and ‘real’ she was. I recognized that I can be myself and serve the Lord, and that that can be good enough.” 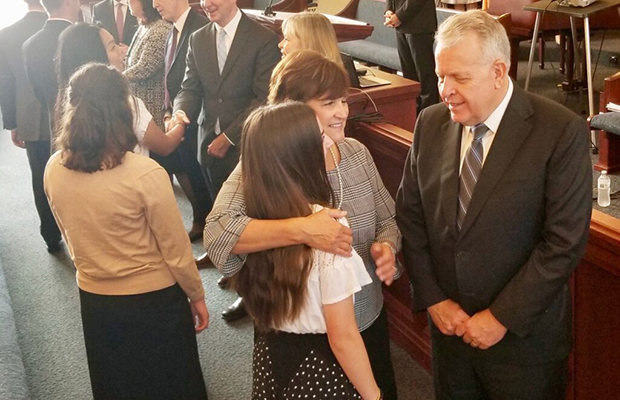 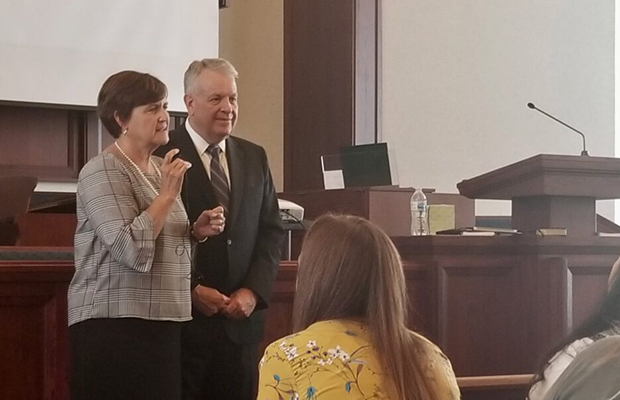 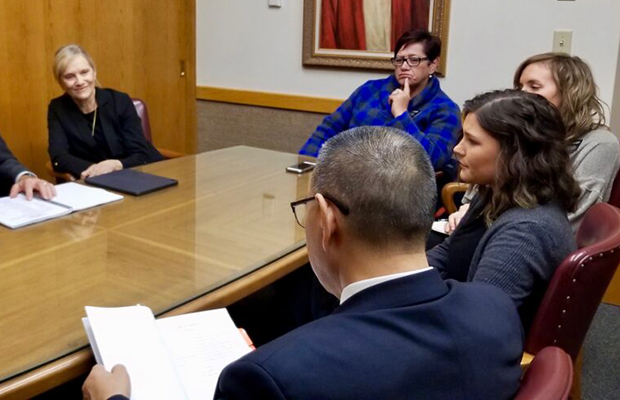 Elder S. Gifford Nielsen and Sister Wendy Nielsen meet with President and Sister Keung of the Canada Calgary Mission and several missionary leaders on October 30, 2019, in Calgary, Canada, prior to beginning a mission tour. Photo courtesy of Scott Taylor. 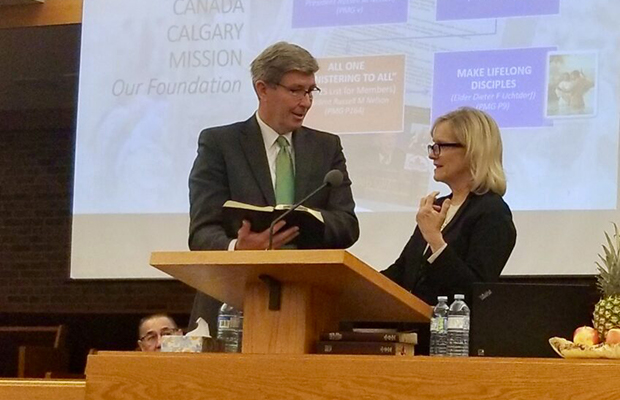 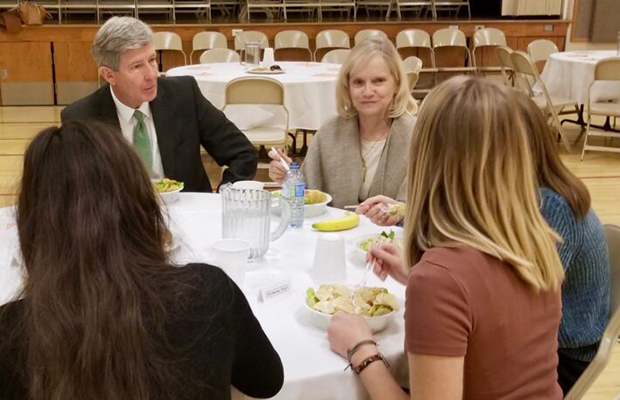 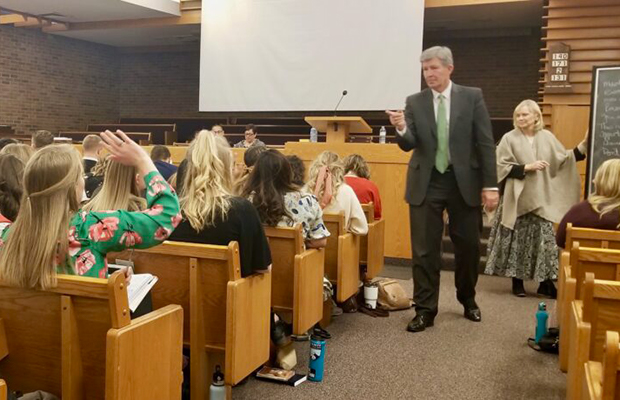