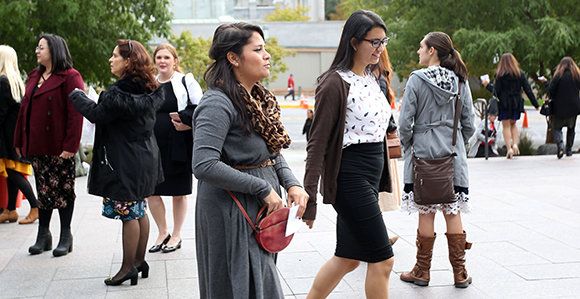 Women walk to the general women’s session of the 188th Semiannual General Conference of The Church of Jesus Christ of Latter-day Saints held in the Conference Center in downtown Salt Lake City on October 6, 2018.

“So, by not spending so much time scrolling, I am spending my time doing other better things.” —Kristyne Torruella

In the women’s session of general conference held on October 6, 2018, President Russell M. Nelson issued a four-part challenge to the women of the Church. One element of his call to action included a 10-day social media fast. Here is what three women learned from heeding the prophet’s counsel.

“I am so grateful for a prophet who is extending specific invitations to act—invitations that come with promised blessings. The invitation to take a 10-day fast from social media, or any other media that has a negative influence, was a blessing. This was one invitation from a prophet that I was able to complete with exactness—and that felt good. I am not saying that social media has no merit, and we were asked to refrain for only 10 days—not a long period of time, but long enough to experience what it felt like to go without something that might not always influence us for good. I am grateful for this chance I had to sustain President Nelson, not only with my hands, but with the way I responded to a specific invitation.”

“When President Nelson issued his 10-day media challenge, I felt burdened by my calling and was pondering how to proceed. I read in Saints that Joseph Smith could only translate the Book of Mormon after repenting and being in harmony with God and others. I realized that President Nelson’s invitation was to sanctify myself so God could give me power.

“I refrained from social media, television, and talk radio, as political news triggers negative emotions in me. I spent more time reading scriptures instead.

“The result was greater peace, answers to prayers, and inspiration for my calling, family, and work. Following the prophet has blessed my life!”

“I’ve been reading the Book of Mormon daily, marking the scriptures related to Jesus Christ, and I’ve learned that Jesus Christ is kind, loving, committed to helping us, compassionate, forgiving, merciful, and a host of other things. So, by not spending so much time scrolling, I am spending my time doing other better things. Both things are good, but one is definitely better than the other. It’s one of those good, better, or best things.”