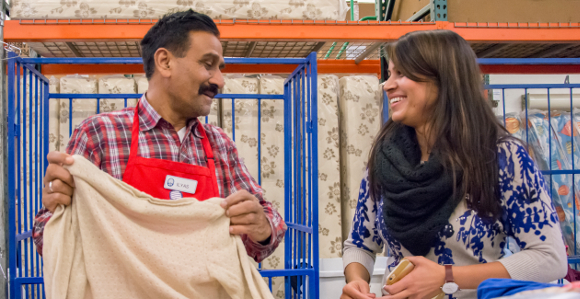 “God is mindful of every people, whatsoever land they may be in; … his bowels of mercy are over all the earth." —Alma 26:37

“I tell you God is directing this program. It is inspired!” —President Ezra Taft Benson

On January 14, 1946, the First Presidency announced that Elder Ezra Taft Benson, a member of the Quorum of the Twelve Apostles, was assigned to reopen missions in Europe after World War II and attend to the spiritual and temporal needs of those Saints.

Following his travels to Europe, Elder Benson recounted the following in April 1947:

“Now, just a word about the Welfare Program. I bring to you, my brothers and sisters, the deep gratitude and thanksgiving of the Saints in Europe. The spirit of the Welfare Program was there long before we arrived. The Saints in various countries had sent help to their less fortunate brothers and sisters in other nations. Welfare gardens had been planted. We found them among the bombed-out buildings. We ran on to many instances where following bombings, branches had joined together and pooled all their remaining supplies, food, clothing, and household articles, and turned them over to the priesthood for distribution according to need.

“It was a great joy when the welfare supplies came through. It was also a great surprise to the military authorities and others to learn with what dispatch the supplies arrived from Zion after arrangements were made and the cable sent back to Zion, March 14, 1946, to start shipments. They could hardly believe that there was a church in existence with a hundred storehouses well stocked, ready to dispatch supplies to the suffering people in Europe. You have heard figures regarding the quantities that have arrived—some 51 carloads. That means over two hundred European carloads, or approximately two thousand tons, and I am sure that if the cost of transporting it on the European end was considered, it would total well over three quarters of a million dollars. The bulk of that, of course, has gone to the countries in greatest distress, Germany and Austria, Holland, Norway, Belgium, with quantities going to many other countries according to need.

“I have faced congregations of more than a thousand Latter-day Saints where it was estimated by the mission president that more than 80 percent of the total clothing worn was clothing from Zion, sent through the Welfare Program. My brethren and sisters, do you need any further evidence of the need for this program and the inspiration back of it? I wish you could have spent a few days with me in Europe during this past year. I tell you God is directing this program. It is inspired! Had it not been so, there would have been many hundreds more of our Latter-day Saints perishing with hunger and dying of cold because of the lack of simple food commodities and clothing.”