In this video, the Mormon Tabernacle choir combines with more than 2,000 voices worldwide for the largest virtual performance of “Hallelujah” from Handel’s Messiah.

“Our goal for this virtual choir was to bring together voices from all over the world and demonstrate the power music has to cross cultural and generational boundaries.” —Scott Barrick, Mormon Tabernacle Choir general manager

From around the world they came—some 2,500 individually submitted videos of singers to be combined with the Mormon Tabernacle Choir in history’s largest virtual performance of “Hallelujah” from Handel’s Messiah.

The completed video may now be accessed at FollowHim.mormon.org. It is one of three videos that can be accessed at that site, all part of the Church’s third annual Easter initiative (see related article).

The “Virtual Hallelujah Chorus,” as it has been dubbed, features the choir and Orchestra at Temple Square being led by music director Mack Wilberg. By means of digital wizardry, a mosaic composed of hundreds of video boxes of varying sizes appears near the ceiling above the choir seats and, as the camera pans to the right, along the balcony of the Tabernacle, each box featuring one of the singers who submitted his or her video file.

Some singers actually appear among the choir members in the choir seats.

The submissions were in response to an invitation from the choir and coordinated with the Missionary Department of the Church and Bonneville Communications. 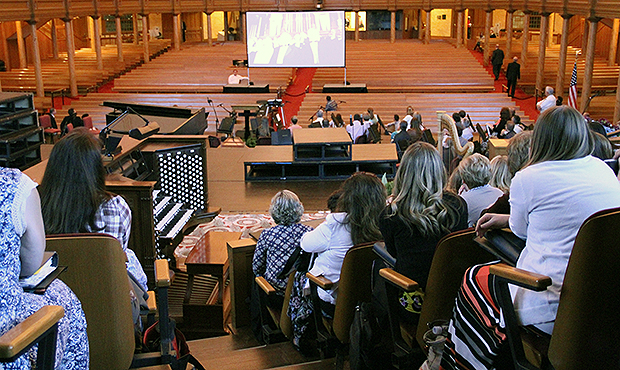 At the March 11 rehearsal, members of the Mormon Tabernacle Choir, foreground, preview the new “Virtual Hallelujah Chorus” video prior to its posting on YouTube. Photo by R. Scott Lloyd.

Accessing an Internet site, a singer would see a recording of Brother Wilberg leading the choir in the “Hallelujah” chorus, with a split screen showing YouTube a capella star Peter Hollens and his wife, Evynne, singing along. The lower part of the screen showed a moving score that the singer could follow for his or her part—be it soprano, alto, tenor, or bass—as the individual performance was recorded on computer.

The videos were then submitted via YouTube and digitally combined into the final product with the thousands of voices and individual video images blending with the music. 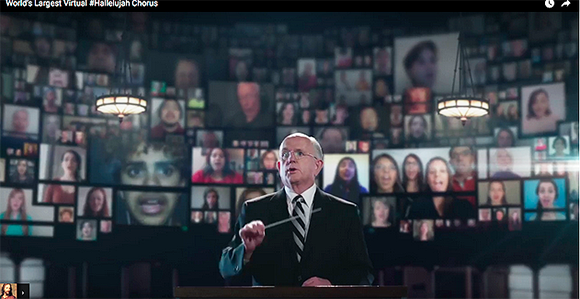 In a screenshot from the “Virtual Hallelujah Chorus” video, musical director Mack Wilberg of the Mormon Tabernacle Choir leads the virtual chorus as images of video submitters appear behind him.

People of various ages submitted videos, ranging from about 12 to about 80. One singer even dressed up as the composer himself, George Frederic Handel, for his video submission.

“Our goal for this virtual choir was to bring together voices from all over the world and demonstrate the power music has to cross cultural and generational boundaries,” said Scott Barrick, the choir’s general manager. “The ‘Hallelujah’ chorus is iconic, and we are elated that so many people wanted to join us for this amazing experience to celebrate the life, death, and Resurrection of Jesus Christ.”

The finished video premiered March 12 during the individual rehearsals of the Orchestra at Temple Square and, later, the choir. For having been a part of the project, each singer or orchestra member was presented with a thank-you note, a card with a screen capture from the video, and a certificate for a free treat.

Choir and orchestra members expressed their appreciation for the video with a standing ovation. 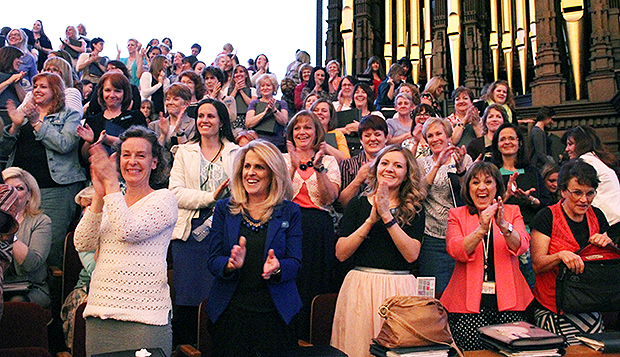 Women in the Mormon Tabernacle Choir at their March 11 rehearsal applaud enthusiastically after the “Virtual Hallelujah Chorus” video was shown to the choir and Orchestra at Temple Square. Photo by R. Scott Lloyd.

The video is posted on YouTube, so it will be a permanent offering, but it is being specially publicized this season as part of the Church’s Easter initiative.

On March 24 and 25, the choir and orchestra will perform the entire Messiah oratorio in the Salt Lake Tabernacle. That coincides with the release this month of a new, landmark recording of the oratorio on CD (in both complete oratorio and highlights versions) and associated events this Easter season, including a live Internet stream and locally organized community events to sing along with the live stream (see related article).