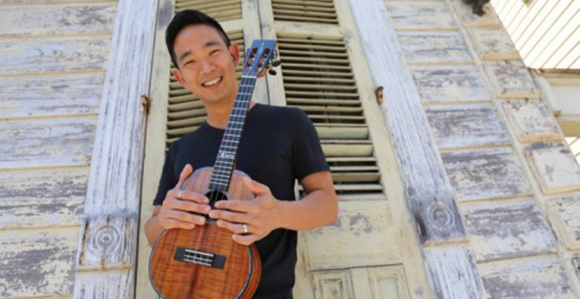 Jake Shimabukuro will be the keynote speaker at the RootsTech conference on March 2, 2019.

RootsTech is thrilled to announce that world-renowned ukulele musician and composer Jake Shimabukuro will be the featured keynote speaker at the conference on Saturday, March 2, 2019, at the Salt Palace Convention Center in Salt Lake City, Utah. Learn more at rootstech.org.

“We are so excited to have Jake join us at RootsTech,” said Jen Allen, event director. “Not only is he an accomplished musician, but he’s a dedicated husband and father who understands the important role of family. His music and his message will be inspiring to the RootsTech audience.”

After Shimabukuro released a viral video in 2005, his records have repeatedly topped the Billboard World Music Charts, and he has toured the world playing his beloved ukulele for people from all walks of life, from poor and underprivileged schoolchildren to Her Majesty Queen Elizabeth II. He has performed with distinguished musicians and at well-known venues such as the Sydney Opera House, the Hollywood Bowl, and the Lincoln Center.

Musical seeds were sown early in the life of Hawaiian-born Shimabukuro. When he was 4 years old and his fingers were finally long enough to reach the chords. His mother, Carol Shimabukuro, an accomplished ukulele player and singer, placed the instrument in his hands for the first time, and for Shimabukuro, it was love at first touch.

Throughout his youth Shimabukuro would play for hours in his room, and as the years went by, his love for the instrument and the Hawaiian culture he was raised in deepened as his skills with the beloved island instrument improved exponentially.

After high school Shimabukuro worked in a music store and formed a band called Pure Heart with two fellow employees. They sought out restaurants and clubs to play in, but most establishments required a demo tape. When Shimabukuro’s former ukulele teacher started up his own record label and invited him to make some recordings, he was excited to finally have the opportunity to create a tape for his band so they could land more gigs.

On the day Pure Heart’s album was released, Shimabukuro was pleasantly surprised to discover that local radio stations around Hawaii were playing all of their songs. In the following years, Pure Heart and Colón, the subsequent band Shimabukuro was a part of, went on to win multiple Na Hoku Hanohano Awards, the Hawaiian equivalent to a Grammy.

This musical success helped Shimabukuro realize how much he wanted to pursue music as a career. He began looking for inspiration everywhere, and music of all kinds fueled his desire to create his own versions of well-known classics. Before long he found himself entertaining the idea of going solo, and in 2005 he experienced an unexpected big break. A video of him playing his own version of George Harrison’s love ballad “While My Guitar Gently Weeps” went viral on YouTube, catapulting him into the global spotlight.

Since that time, Shimabukuro’s records have repeatedly topped the Billboard World Music Charts. He has followers from all over the world, and as a 5th generation Japanese-American, he’s been particularly celebrated in both countries. He has had the opportunity to play with many distinguished musicians and orchestras and has performed at well-known venues, such as the Sydney Opera House, the Hollywood Bowl, and the Lincoln Center.

Shimabukuro continues to share his musical gift with people from all walks of life, from poor and underprivileged schoolchildren to Her Majesty Queen Elizabeth II. In the 2012 documentary of his life and success entitled Jake Shimabukuro: Life on Four Strings, he shared the following about performing: “When I’m on stage, all I’m trying to do, and all want to do is just connect with people, and I want to be as sensitive as possible so that I can feel what they’re feeling. Music communicates the purest form of human emotion.”