Viewpoint: Yielding Our Hearts to God 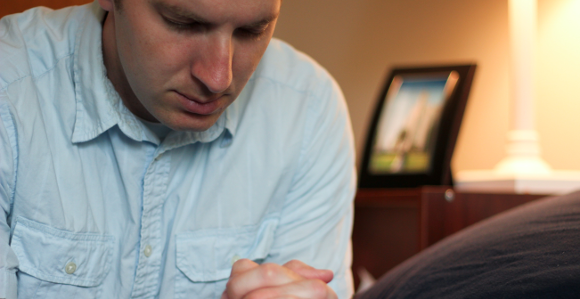 Pray for the strength and humility to willingly submit your will to the Lord's will.

“‘His way is the path that leads to happiness in this life and eternal life in the world to come.’ Can we love Jesus Christ and His way more than we love ourselves and our own agenda?” —Sister Neill F. Marriott

A young man returned home from a date one evening discouraged and heartsore when the young woman he was courting—and had developed strong feelings for—revealed that she thought they should end their relationship. While the young woman wanted to break up, the young man did not. Still, they both agreed to go home and pray about it before their next date the following evening.

Struggling with feelings of loneliness and inadequacy, the young man knelt beside his bed and poured out his soul to the Lord. He expressed his hurt and disappointment at the apparent end of this relationship and his desire for a temple marriage and eternal family. He expressed his feelings for the young woman and his appreciation for the wonderful qualities she exhibited during their courtship. Eventually, he even prayed that she would also find a worthy spouse who would recognize her good and honest heart.

Feeling exhausted but very noble, he climbed into bed eager for rest. Unfortunately for him, sleep proved elusive. A heavy, conflicted feeling descended over him. He felt burdened and weighed down. Finally, he knelt again and pleaded with the Lord to let him know what he needed to do to find relief from his mental anguish. Soon, the thought came that he needed to ask the young woman to marry him.

The young man’s immediate response was a definite “No.”

“She’ll say no,” he thought. “Why would I ask her only to be rejected? She doesn’t want me.” But the more he resisted, the heavier he felt. Finally, he relented and committed to ask her. Immediately, the mental burden lifted and the young man felt peace and calm return.

Soon, however, he thought about previous relationships that had dissolved and the residue of pain and rejection left behind. “I can’t do it,” he thought. “I won’t do it.” Immediately, the weight returned to his mind. Deep into the night, the young man grappled with his fears, but he soon noticed a pattern. When he trusted and committed to obey, peace would come. When he doubted and allowed his fears to influence his thinking, the heavy, burdened feeling would return. Finally, just before dawn, the young man figuratively bundled his fears and handed them to the Lord. This time as he prayed, he not only promised to do as the Spirit prompted but pleaded for strength and help in doing what he felt he couldn’t do on his own. A sweet, calm assurance filled his mind and soon he was able to sleep.

At their next meeting, despite his fears, the young man honestly expressed his feelings for the young woman. That began an open dialogue between the two about the direction of their relationship. They communicated their hopes and desires for the future as well as their concerns and fears. Instead of ending their relationship that night, they left feeling more unified and able to share in their feelings for one another and for the Lord. A few weeks later, when the young man proposed, he joyfully thanked the Lord when the young woman said yes. Many years later, after a temple marriage, many children, grandchildren, and even a few great-grandchildren, the now-old man expressed to his posterity his gratitude that he made the decision to submit that night to the will of his Heavenly Father.

The decision to submit our hearts—or our will—to our Heavenly Father can be a difficult process as we grapple with subjecting our own thoughts, feelings, fears, desires, and pride. Sister Neill F. Marriott, second counselor in the Young Women general presidency, in this past October general conference, remarked, “I have struggled to banish the mortal desire to have things my way, eventually realizing that my way is oh so lacking, limited, and inferior to the way of Jesus Christ. ‘His way is the path that leads to happiness in this life and eternal life in the world to come.’ Can we love Jesus Christ and His way more than we love ourselves and our own agenda?” (“Yielding Our Hearts to God”)

Elder Jeffrey R. Holland, when he was president of Brigham Young University, said in a campus devotional, “We must be willing to place all that we have—not just our possessions (they may be the easiest things of all to give up), but also our ambition and pride and stubbornness and vanity—we must place it all on the altar of God, kneel there in silent submission, and willingly walk away.

“I believe what I am describing here is the scriptural definition of a saint, one who will ‘yield to the enticings of the Holy Spirit,’ and ‘through the atonement of Christ … becometh as a child, submissive, meek, humble, patient, full of love, willing to submit to all things which the Lord seeth fit to inflict upon him, even as a child doth submit to his father’ (Mosiah 3:19)” (“The Will of the Father” [BYU devotional address, Jan. 17, 1989]).

Elder Neal A. Maxwell (1926–2004) of the Quorum of the Twelve Apostles said, “The submission of one’s will is really the only uniquely personal thing we have to place on God’s altar. It is a hard doctrine, but it is true. The many other things we give to God, however nice that may be of us, are actually things He has already given us, and He has loaned them to us. But when we begin to submit ourselves by letting our wills be swallowed up in God’s will, then we are really giving something to Him” (“Insights from My Life,” Ensign, Aug. 2000, 9).

As Elder Maxwell observed, learning to trust in God, learning to submit our will, can be “hard doctrine.” Like the young man, it may require continued rededication until we learn through experience “all things work together for good to them that love God” (Romans 8:28).

As we continue in this process, may we look to the example of our Savior, Jesus Christ, who when He appeared to the Nephites after His death and resurrection, pronounced, “I am the light and the life of the world; … I have suffered the will of the Father in all things from the beginning” (3 Nephi 11:11).