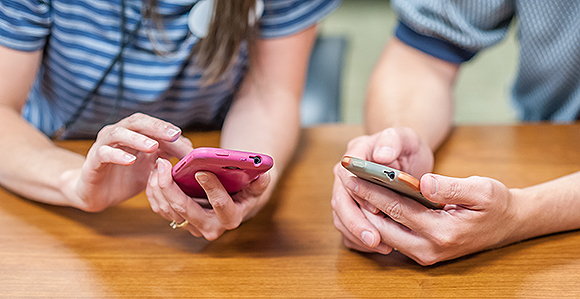 Church leaders have urged Latter-day Saints to not let the use of social media and other modern technologies interfere with their relationships with God, family, and friends, but to use them to share goodness and the knowledge of the Savior with the world.

“If we are not vigilant in how we use our personal devices, we too can begin to turn inward and forget that the essence of living the gospel is service.” —Sister Bonnie L. Oscarson, Young Women General President

Included as social media users are every member of the First Presidency and Quorum of the Twelve Apostles—who have used Facebook and other networks to share uplifting and meaningful messages.

Social media transcends geography, connects family and friends, and enhances family history efforts across the globe. It has changed the way we communicate, the way we date, and they way we buy goods. Information, once relegated to encyclopedias, is now at our fingertips. And meaningful messages, including the message of the restored gospel of Jesus Christ, are shared with ease.

In his October 2017 general conference address Elder Gary E. Stevenson of the Quorum of the Twelve Apostles spoke of how technology, including social media, facilitates spreading “the knowledge of a Savior.”

These technologies include Church websites like ChurchofJesusChrist.org and Mormon.org; mobile apps such as Gospel Library, Mormon Channel, LDS Tools, and Family Tree; and social media platforms, including Facebook, Instagram, Twitter, and Pinterest, he said. “These modalities have generated hundreds of millions of likes, shares, views, retweets, and pins and have become very effective and efficient in sharing the gospel with family, friends, and associates,” he said.

But research shows social media also impacts the way we feel about ourselves.

In this age when many are using social media as a means to feel connected, a new BYU–Idaho study has found that the more time people spend on social media, the more likely they are to be lonely.

The study found that as daily social media time increased for participants, so did “perceived loneliness and depressive symptoms,” including feeling alone or blue, lacking motivation, or having a hard time sleeping, said Robert R. Wright, director of the Health Psychology emphasis in the BYU–Idaho Psychology Department.

“The main message here is that we need to use social media wisely,” he said.

The study supports the concerns of Elder Stevenson, who addressed the “idealized reality and debilitating comparisons” resulting from social media at BYU Women’s Conference on May 5, 2017.

“The world usually is just not as bright as it appears on social media,” he said. “Nevertheless, there is much good that has, and will, come through these new communication platforms” (“The Knowledge of a Savior”).

During her October 2017 general conference address, Sister Bonnie L. Oscarson, Young Women General President, said we live in a culture where more and more “we are focused on the small, little screen in our hands than we are on the people around us.

“We have substituted texting and tweeting for actually looking someone in the eye and smiling or, even rarer, having a face-to-face conversation,” she said. “As amazing as modern technology can be for spreading the message of the gospel of Jesus Christ and helping us stay connected to family and friends, if we are not vigilant in how we use our personal devices, we too can begin to turn inward and forget that the essence of living the gospel is service” (“The Needs before Us”).

While heralding the advantages of today’s technology, Elder M. Russell Ballard of the Quorum of the Twelve Apostles urged young Latter-day Saints during a worldwide devotional in May of 2014 to not let its use interfere with their relationships with God or with family and friends.

Saying that today’s pervasive handheld devices such as smartphones are a blessing, he declared: “They need to be our servants, not our masters. For example, if later tonight you share inspiring thoughts from this devotional on social media, your smartphone is a servant. If you randomly surf the Internet, your smartphone is a master.”

He expressed concern about excessive text messaging and use of social media that supplant talking directly with one another and talking in prayer to God.

A recent Time magazine headline said it all: “You Asked: Is Social Media Making Me Miserable?”

“Social media now dictates how people interact with friends, read the news, and navigate their day-to-day existence,” according to the article. “What is all that doing to the human psyche?”

A study, published in the American Journal of Epidemiology, found that the more a person uses Facebook, the more likely he or she is to experience “negative physical health, negative mental health, and negative life satisfaction,” said Holly Shakya, assistant professor and social media researcher at the University of California, San Diego, who authored the study with Nicholas A. Christakis.

In May 2009, Elder David A. Bednar of the Quorum of the Twelve Apostles raised an apostolic voice of warning regarding “the potentially stifling, suffocating, suppressing, and constraining impact of some kinds of cyberspace interactions and experiences upon our souls” (“Things as They Really Are,” Ensign, June 2010, 20).

He asked young people to be obedient and invite the constant companionship of the Holy Ghost.

Speaking at BYU on August 19, 2014, he asked Latter-day Saints to focus on the power of the internet and particularly social media to communicate truth. He exhorted members to share messages filled with righteousness and truth—messages that are authentic, edifying, and praiseworthy.

“I invoke this blessing upon you: that you may come to understand more fully the spiritual significance and blessing of living in the dispensation of the fulness of times, that you may have eyes to see clearly both the possibilities and the pitfalls of the remarkable technologies that are available to us today, that you may increase in your capacity to use these inspired tools appropriately, and that you may receive inspiration and guidance about the role you should play in helping to sweep the earth as with a flood of truth and righteousness” (“To Sweep the Earth as with a Flood,” BYU Education Week address, Aug. 19, 2014).