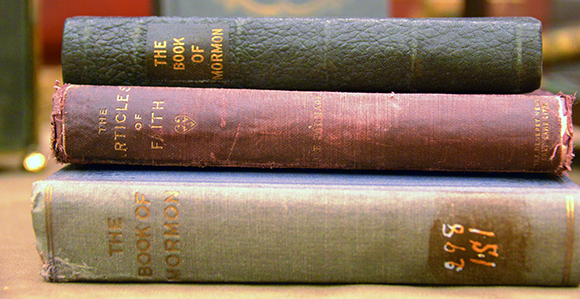 The Articles of Faith, which serve as the official declaration of the Church, were published 175 years ago.

“I encourage each of you to study the Articles of Faith and the doctrines they teach. … If you will use them as a guide to direct your studies of the Savior’s doctrine, you will find yourselves prepared to declare your witness of the restored, true church of the Lord. You will be able to declare with conviction: ‘We believe these things.’” —Elder L. Tom Perry

In 1842, George Barstow began compiling a history of the state of New Hampshire, and he wanted to include a chapter about the members of The Church of Jesus Christ of Latter-day Saints.

Because Mr. Barstow did not know much about the Church, he contacted John Wentworth, a newspaper editor in Chicago, Illinois.

In response, Mr. Wentworth asked Joseph Smith about the beliefs and history of the Church.

“At the request of Mr. John Wentworth, editor and proprietor of the Chicago Democrat, I have written the following sketch of the rise, progress, persecution, and faith of the Latter-day Saints, of which I have the honor, under God, of being the founder,” wrote Joseph Smith.

The Prophet’s response—known as the Wentworth Letter—was not published in the Chicago Democrat or in any history of New Hampshire. Instead, it was published in Nauvoo in the Times and Seasons on March 1, 1842—175 years ago this week.

At the end of the letter, Joseph Smith wrote about the basic beliefs of the Church. This important and prophetic list has become known as the Articles of Faith.

“The letter is one of the choicest documents in our church literature; as also it is the earliest published document by the Prophet personally, making any pretension to consecutive narrative of those events in which the great Latter-day work had its origin,” wrote Elder B. H. Roberts of the First Council of the Seventy. “For combining conciseness of statement with comprehensiveness of treatment of the subject with which it deals, it has few equals among historical documents, and certainly none that excel it in our church literature” (History of the Church, 4:535–41).

Speaking at Harvard Law School on February 26, 2010, Elder Dallin H. Oaks of the Quorum of the Twelve Apostles said that “our Articles of Faith,” found at the end of the Wentworth Letter, remain today as “our only formal declaration of belief.”

The impact of this sacred document lingers today.

President Thomas S. Monson wrote in the June 2011 Friend magazine about a man named Sharman Hummel, whom he worked with in the printing business.

Mr. Hummel learned of the Church when he sat next to a girl on a bus and posed the question “What do you Mormons believe?” The girl recited the Articles of Faith.

Mr. Hummel got off the bus, looked up the Church, and requested the missionaries come and teach him more. He joined the Church and now claims a large posterity of Latter-day Saints (“All Because a Child Knew the Articles of Faith”).

The late Elder L. Tom Perry of the Quorum of the Twelve Apostles taught in his April 1998 general conference address that if members will use the Articles of Faith as a guide to direct their studies of the Savior’s doctrine, they will find themselves prepared to declare their witness of the restored, true Church of the Lord.

“The Articles of Faith were not the work of a team of scholars but were authored by a single, inspired man who declared comprehensively and concisely the essential doctrines of the gospel of Jesus Christ,” Elder Perry said. “They contain direct and simple statements of the principles of our religion, and they constitute strong evidence of the divine inspiration that rested upon the Prophet Joseph Smith.

“I encourage each of you to study the Articles of Faith and the doctrines they teach. … If you will use them as a guide to direct your studies of the Savior’s doctrine, you will find yourselves prepared to declare your witness of the restored, true church of the Lord. You will be able to declare with conviction: ‘We believe these things’” (“The Articles of Faith”).

The Wentworth Letter and the Articles of Faith help people who are not Latter-day Saints understand how the Church is different from other churches. The letter articulates the history of the Church and our purpose.

In the letter, the Prophet also wrote about the impact of the work of the Church:

“Persecution has not stopped the progress of truth, but has only added fuel to the flame, it has spread with increasing rapidity,” Joseph Smith wrote. “Proud of the cause which they have espoused, and conscious of our innocence, and of the truth of their system, amidst calumny and reproach, have the Elders of this Church gone forth, and planted the Gospel in almost every state in the Union; it has penetrated our cities, it has spread over our villages, and has caused thousands of our intelligent, noble, and patriotic citizens to obey its divine mandates, and be governed by its sacred truths.”

After 175 years the sacred text is still relevant.

The Prophet wrote: “Our missionaries are going forth to different nations, and in Germany, Palestine, New Holland, Australia, the East Indies, and other places, the Standard of Truth has been erected; no unhallowed hand can stop the work from progressing; persecutions may rage, mobs may combine, armies may assemble, calumny may defame, but the truth of God will go forth boldly, nobly, and independent, till it has penetrated every continent, visited every clime, swept every country, and sounded in every ear; till the purposes of God shall be accomplished, and the Great Jehovah shall say the work is done.”

For “brevity, clearness, and forthrightness of doctrinal presentation,” the Articles of Faith “are unexcelled,” according to Elder Bruce R. McConkie of the Quorum of the Twelve Apostles in his book, Mormon Doctrine. “When compared with the muddled creeds formulated by the supposedly greatest religious thinkers of Christendom … the Articles of Faith, coming forth as the spontaneous and inspired writing of one man, are a marked evidence of the spirit of revelation that rested upon the Prophet” (p. 53).