Viewpoint: Prepare Now to Serve Wherever You Are Needed 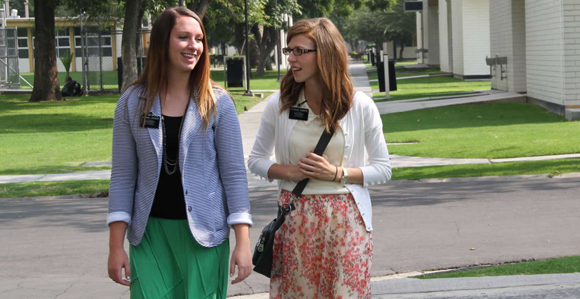 Sister Chalese Johnson of Ogden, Utah, and her companion, Sister Rebecca Newman of Elk Ridge, Utah, walk back to their dorm room at the Mexico City MTC.

“We call upon you … to rise up, to measure up, and to be fully prepared to serve the Lord.” —Elder M. Russell Ballard of the Quorum of the Twelve

Recently a reporter enjoyed lunch with a group of missionaries who had begun their Spanish-language training at the new missionary training center in Mexico City.

The elders and sisters gathered around that cafeteria table were an enthusiastic bunch. They were working hard to learn a new language even as they studied, prayed, and fasted to fortify gospel testimonies that, for most, had been years in the making.

Some of the missionaries were just a few weeks removed from high school and were making their maiden transition to a life away from home and family.

The reporter asked his young lunch mates if they had always had a goal to serve a mission. Almost every missionary nodded his or her head affirmatively.

Only one—a soft-spoken sister missionary—shook her head. Not wanting to push a personal matter in front of the others, the reporter moved on to another question.

The sister stopped him mid-sentence.

That young missionary understood a fundamental gospel principle: we must prepare to serve—even if the exact nature or calling of one’s service is unknown. Members cannot determine what future calls or specific assignments await them. Some may be called, for a season, as bishops or to serve in their respective priesthood quorums or Relief Society units. Many will answer sacred calls to be teachers and help others understand the wonders of the gospel. Others will work closely with children and youth, serving as Scoutmasters or perhaps organizing the annual Young Women camp.

While future callings may be uncertain, Church members—such as that earnest sister missionary—can be certain that they must prepare for whatever calling may come.

The Book of Mormon teaches of the people of Ammon, who had covenanted never again to take up weapons for the shedding of blood. They held true to their covenants even when threatened by their enemies. But their sons—2,000 in number—had made no such covenant and were quick to answer the call to defend their people.

“And they entered into a covenant to fight for the liberty of the Nephites, yea, to protect the land unto the laying down of their lives” (Alma 53:17).

“These young men fought valiantly against the much older and much more experienced Lamanite army. According to their leader, Helaman, ‘They … fought as if with the strength of God; … and with such mighty power did they fall upon the Lamanites, that they did frighten them …’ (Alma 56:56).

“Imagine that! These inexperienced young men were so spiritually and physically prepared, and so powerful, that they frightened their foes into surrendering! Although all 2,000 of the young men were wounded in battle at one time or another, not one was killed (see Alma 57:25)” (“The Greatest Generation of Missionaries”).

Despite their youth, Helaman’s valiant warriors ably answered their call to service because they were prepared. Spiritual preparation allows each of us to become powerful instruments for good when whatever call arrives.

“We are fighting a battle that in many ways is more perilous, more fraught with danger than the battle between the Nephites and the Lamanites. Our enemy is cunning and resourceful. We fight against Lucifer, the father of all lies, the enemy of all that is good and right and holy. …

“… We call upon you … to rise up, to measure up, and to be fully prepared to serve the Lord” (“The Greatest Generation of Missionaries”).

The Church is witnessing a historic period of missionary service. Young men and young women are answering full-time calls in record numbers.

Elder Ben B. Banks of the Seventy offered counsel on how the youth of the Church can “be fully prepared” for missionary service.

“Make yourselves worthy to receive a mission call. Live clean, pure lives. Study the scriptures—not just read, but study the scriptures—especially the Book of Mormon. … Be strong enough to live the Word of Wisdom, and follow the counsel of your parents and priesthood leaders.

“I know you young [people] are growing up in a challenging world with all kinds of peer pressure. You may even be struggling with the decision of going on a mission because of your educational and vocational desires, or because of a budding musical or athletic career. …

“If you wonder or struggle as to what will be of most worth to you, listen to the direction given by the Lord: ‘For many times you have desired of me to know that which would be of the most worth unto you. … And now, behold, I say unto you, that the thing which will be of the most worth unto you will be to declare repentance unto this people, that you may bring souls unto me, that you may rest with them in the kingdom of my Father’ (D&C 15:4, 6).

“I promise you young [people] that if you will commit and prepare to serve a mission, it will be the most rewarding and exciting experience of your lives” (“The Value of Preparation,” Oct. 1989 general conference).

Even as future missionaries prepare to serve, the Lord is preparing the way for their sacred service.

“Just as with missionaries past and present, the Lord knows you and has a mission experience prepared for you,” said Elder W. Christopher Waddell of the Seventy. “He knows your mission president and his wonderful wife, who will love you as their own children and who will seek inspiration and direction on your behalf. He knows each of your companions and what you will learn from them. He knows each area in which you will labor, the members you will meet, the people you will teach, and the lives you will impact for eternity” (“The Opportunity of a Lifetime,” Oct. 2011 general conference).