Viewpoint: Hard Work and Self-Reliance Help Us Help Others 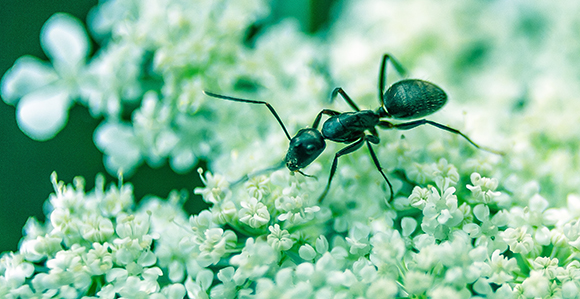 In the children’s fable of the ant and the grasshopper, we learn about the value of hard work. Applying the principles of self-reliance in our own lives can yield spiritual and temporal blessings for our families.

“Work is honorable. It is good therapy for most problems. It is the antidote for worry. It is the equalizer for deficiency of native endowment. Work makes it possible for the average to approach genius. What we may lack in aptitude, we can make up for in performance.” —Elder J. Richard Clarke of the Seventy

A popular children’s fable recounts the story of an ant and a grasshopper. The pair each enjoyed a beautiful summer day. The ant spent the day working and collecting grain to store for the winter. The grasshopper spent the day playing, singing, and dancing in the sun.

The grasshopper did not understand why the ant was diligently working.

“Why don’t you come outside and play with me?” said the grasshopper to the ant.

“I cannot. I am storing food for the winter when there won’t be anything to eat!” the ant replied.

“Why are you worrying now? There is plenty of food!” said the grasshopper as he continued to play in the sun.

The story of self-reliance and hard work exemplified by the ant has also been taught by Church leaders.

“Work is basic to all we do,” wrote President Thomas S. Monson in a September 1986 Ensign article titled “Guiding Principles of Personal and Family Welfare.” “God’s first direction to Adam in the Garden of Eden as recorded in scripture was to dress the garden and take care of it. After the fall of Adam, God cursed the earth for Adam’s sake saying, ‘In the sweat of thy face shalt thou eat bread, till thou return unto the ground’ (Genesis 3:19). Today, many have forgotten the value of work. Some falsely believe that the highest goal in life is to achieve a condition in which one no longer needs to work.”

Work, we know, leads to self-reliance.

The Church teaches that self-reliance is the “ability, commitment, and effort to provide the necessities of life for self and family.” Then, “as members become self-reliant, they are also better able to serve and care for others” (Handbook 2: Administering the Church).

Church members are responsible for their own spiritual and temporal well-being. “Blessed with the gift of agency, they have the privilege of setting their own course, solving their own problems, and striving to become self-reliant. Members do this under the inspiration of the Lord and with the labor of their own hands,” according to the handbook.

Elder Robert D. Hales of the Quorum of the Twelve Apostles wrote in a 2009 booklet, “Basic Principles of Welfare and Self-Reliance,” that provident living means not coveting the things of this world. “It means using the resources of the earth wisely and not being wasteful, even in times of plenty. Provident living means avoiding excessive debt and being content with what we have.”

“We live in an age of entitlement. Many believe they should have all that others have—right now. Unable to delay gratification, they go into debt to buy what they cannot afford. The results always affect both their temporal and spiritual welfare.”

President Spencer W. Kimball said in his October 1977 general conference address that “the responsibility for each person’s social, emotional, spiritual, physical, or economic well-being rests first upon himself, second upon his family, and third upon the Church if he is a faithful member thereof.”

“No true Latter-day Saint, while physically or emotionally able, will voluntarily shift the burden of his own or his family’s well-being to someone else” (“Welfare Services: The Gospel in Action”).

The lesson of the story of the ant and the grasshopper is repeated in other forms.

The lesson of the three little pigs, for example, is a fable about three pigs who each build a house of different material. The pig who does not fear work builds a sturdy house out of bricks—completing the majority of the task after his foolish brothers complete their homes of straw and sticks and begin to play.

“There is no substitute under the heavens for productive labor,” said President Gordon B. Hinckley. “It is work that spells the difference in the life of a man or woman. It is stretching our minds and utilizing the skills of our hands that lifts us from the stagnation of mediocrity (“I Believe,” Ensign, Aug. 1992).

The Lord commands us to work. The fourth of the Ten Commandments says, “Six days shalt thou labour, and do all thy work” (Exodus 20:9). And in Doctrine and Covenants 42:42, the Lord instructs, “Thou shalt not be idle.”

“The dignity and self-esteem that honest work produces are essential to happiness,” said President Spencer W. Kimball. “It is so easy for leisure to turn into laziness” (“Listen to the Prophets,” Ensign, May 1978).

President Ezra Taft Benson spoke of the pioneer work ethic. “What would they say to us?” he questioned. “They would counsel us to believe in the dignity of work; to believe that the world owes no man a living but that it owes every man an opportunity to make a living.”

It is the same message communicated by the fictional ant and the grasshopper and the three little pigs—whose stories teach all of us the value of hard work.

“Work is honorable,” said Elder J. Richard Clarke, a General Authority Seventy, in his April 1982 general conference address. “It is good therapy for most problems. It is the antidote for worry. It is the equalizer for deficiency of native endowment. Work makes it possible for the average to approach genius. What we may lack in aptitude, we can make up for in performance” (“The Value of Work”).

The voice of the Lord to this generation is:

“Behold, I say unto you that it is my will that you should go forth and not tarry, neither be idle but labor with your might. …

“And thus, if ye are faithful ye shall be laden with many sheaves, and crowned with honor, and glory, and immortality, and eternal life” (D&C 75:3, 5).