Viewpoint: Fortifying the Church from Within 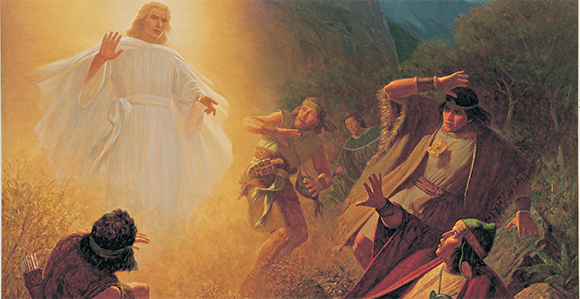 An angel appears to Alma and the four sons of King Mosiah and commands Alma to stop persecuting the Church. Because we know the Church of Jesus Christ will never be overthrown by outside forces, we can work today to strengthen the Church from within.

“The Church of Jesus Christ of Latter-day Saints has never been stronger. … But, ‘remember the worth of souls is great in the sight of God.’ We reach out to everyone.” —Elder Quentin L. Cook of the Quorum of the Twelve Apostles

It had been a generation or so since the prophet Alma baptized his followers at the waters of Mormon and established the church of God.

“And they were called the people of God. And the Lord did pour out his Spirit upon them, and they were blessed, and prospered in the land” (Mosiah 25:24). A period of peace and prosperity began to prevail among the Nephites.

But now, there were many of the rising generation who did not share the beliefs of their fathers regarding the resurrection of the dead and the coming of Christ. Some of these unbelievers began to inflict persecutions upon the members of the Church. Among them were Alma the Younger and the sons of Mosiah.

Alma the younger became “a great hinderment to the prosperity of the church of God; stealing away the hearts of the people; causing much dissension among the people; giving a chance for the enemy of God to exercise his power over them” (Mosiah 27:9).

While he and the sons of Mosiah were going about seeking to destroy the Church, an angel of the Lord appeared to them, causing them to fall down in astonishment.

“Alma, arise and stand forth,” the angel commanded, “for why persecutest thou the church of God? For the Lord hath said: This is my church, and I will establish it; and nothing shall overthrow it, save it is the transgression of my people” (Mosiah 27:13).

There was much assurance in this angelic declaration. It states in effect that the Church was invulnerable to harm from outside forces, that only the transgression of the members within would overthrow it.

We in our day can likewise be assured that the Church of Jesus Christ, established in this dispensation of the fulness of times to prepare the way for the Second Coming of the Lord and Savior in glory, will be invincible to destructive, external forces.

At the dawn of the Restoration, in a revelation through the Prophet Joseph Smith, the Lord spoke of “the rising up and the coming forth of my church out of the wilderness—clear as the moon, and fair as the sun, and terrible as an army with banners” (D&C 5:14).

The imagery bespeaks a vital, vigorous, brilliant, even formidable organization with tiny, comparatively obscure origins that overcomes obstacles and opposition to grow and spread until its influence is felt throughout the earth.

Like the Church of God among the Nephites, The Church of Jesus Christ of Latter-day Saints has faced persecution and oppression, especially in the early days of this gospel dispensation.

Even today, the Church faces opposition as it pursues its objective to take the gospel of the kingdom to every nation, kindred, tongue, and people and to spread the knowledge of the plan of happiness to all who will receive it.

It can be daunting to observe the proliferation of societal trends and worldly ideologies that conflict with the doctrines and beliefs that we embrace. Let us not lose faith. Rather, let us remember the words of the Prophet Joseph Smith penned in a letter to newspaper editor John Wentworth:

“The Standard of Truth has been erected; no unhallowed hand can stop the work from progressing; persecutions may rage, mobs may combine, armies may assemble, calumny may defame, but the truth of God will go forth boldly, nobly, and independent, till it has penetrated every continent, visited every clime, swept every country, and sounded in every ear, till the purposes of God shall be accomplished, and the Great Jehovah shall say the work is done” (Teachings of Presidents of the Church: Joseph Smith [2007], 444).

As in the days of the Nephites, the Church of Jesus Christ will never be overthrown by outside forces. Thus assured, we can confidently be about the business of strengthening the Church from within by means of personal righteousness and faithfulness, even as we reach out to share the gospel with others.

And while we should never feel complacent in this respect, there is reason to feel encouraged.

“The Church of Jesus Christ of Latter-day Saints has never been stronger,” said Elder Quentin L. Cook of the Quorum of the Twelve Apostles at the April 2015 general conference. “The number of members removing their names from the records of the Church has always been very small and is significantly less in recent years than in the past. The increase in demonstrably measurable areas, such as endowed members with a current temple recommend, adult full-tithe payers, and those serving missions, has been dramatic. Let me say again, the Church has never been stronger. But, ‘remember the worth of souls is great in the sight of God’ [D&C 18:10]. We reach out to everyone” (“The Lord Is My Light”).

So in the words of our beloved pioneer hymn, let us gird up our loins and fresh courage take (see “Come, Come, Ye Saints,” Hymns, no. 30) in keeping the Church strong. How do we go about it?

Simply put, we do as President Russell M. Nelson admonished us in his first address as President of the Church: We “stay on the covenant path” (“A Message from the First Presidency,” Jan. 16, 2018).

We maintain personal purity. We are honest in all our dealings. We are steadfastly loyal as husbands and wives. We bring up our children in light and truth. We serve the Lord in our callings and responsibilities. We bear one another’s burdens.

And, as general Church leaders encouraged us last week at the leadership session of RootsTech 2018, we seek through member missionary work and through family history and temple work “to gather God’s children on both sides of the veil.”

Thus busily and happily engaged, we can expect our Father in Heaven to pour out His Spirit upon us, as He did in Alma’s day.