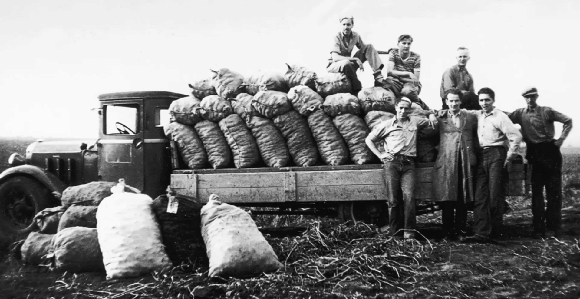 Latter-day Saints in Holland load bags of potatoes onto trucks bound for hungry Saints in Germany.

The horrors of World War II began for Holland in late 1940 when Nazi troops overran the country in five days, leaving 40,000 civilians dead and destroying 400,000 homes. For five years the German military occupied Holland. More than 200,000 Dutch people died because of the war.

At the end of the war, however, a stake president in the Netherlands named Cornelius Zappey “looked at the terrible conditions and perceived something that was even worse than the physical conditions. He wondered what if anything could dissolve the bitter feelings toward Germans?”

His people needed something to do that would require them to work together again and try to overcome their differences. Since potatoes were one of Holland’s best crops, he proposed they start projects to grow potatoes.

During 1947, “Mormon potato patches sprang up in backyards, road medians, vacant lots, and former flower gardens. By autumn the prospects for a good harvest looked bright. People were feeling hopeful and had had a good experience working together. Their expectation was that their potatoes produced by their hard work would be used to aid Dutch communities.”

But President Zappey had colleagues in Germany who shared with him the even harsher conditions in neighboring Germany. “My people are so hungry,” one of them repeatedly told President Zappey during their meetings in Holland.

The closer harvest time drew, the more President Zappey thought about sending the potatoes to communities in Germany. He called a conference in Rotterdam to propose that the potatoes be shipped to Germany. He was worried about the reaction—the Dutch still were on rations themselves.

“Some of the most bitter enemies you people have encountered as a result of this war are the German people. We know what intense feelings of dislike you have for them. But those people are now much worse off than you, and we are asking you to send your entire potato harvest to the German [people]. Will you do it? Do you want [them] to die of hunger there?” After much discussion and wrestling, the leaders voted for the project.

At harvest time, the leaders learned that instead of the projected 15 tons of potatoes, Latter-day Saints in Holland had grown 70 tons. Volunteers worked to move the mountain of potatoes into 10 rented trucks. Then, shortly after midnight on November 7, the convoy rolled east toward the German border (see Sharon Eubank, “That They May Not Suffer,” Pioneers in Every Land lecture, May 14, 2015).

Latter-day Saints today continue to carry on the legacy of this epic act of courage and compassion, which took place 70 years ago.

The humanitarian work of The Church of Jesus Christ of Latter-day Saints is “based on a desire to follow the example of Jesus Christ in relieving suffering, lifting burdens, and providing hope,” according to the 2016 LDS Charities Annual Report.

The principles of service date back to 1842 when the Prophet Joseph Smith told early Latter-day Saints to “feed the hungry, to clothe the naked, to provide for the widow, to dry up the tear of the orphan, and to comfort the afflicted, whether in this church, or in any other, or no church at all” (Times and Seasons, Mar. 15, 1842).

Almost 100 years later, the Church welfare program was created in 1936 to serve those in need. In 1996, LDS Charities was created to carry out humanitarian work.

Just as potatoes changed and healed hearts after World War II, these programs continue to lift and strengthen members and others across the globe.

• Served 116,000 people in 12 countries through the Benson Food Initiative.

• Trained 33,000 caregivers in maternal and newborn care in 37 countries.

President Thomas S. Monson said in a 2010 Church News interview that the problem with giving humanitarian aid worldwide can be summarized in a simple quote from Anne Morrow Lindbergh in her book Gift from the Sea: “My life cannot implement in action the demands of all the people to whom my heart responds.”

The key, he said, is to never walk away from suffering.

This sentiment is the legacy shared by all Latter-day Saints today and exemplified 70 years ago by Dutch Church members—who sent food to their starving enemies.

When the potatoes reached Germany as winter approached in 1947, the German Latter-day Saints were astonished. The West German Mission history noted the arrival on November 16, 1947. “Each [person] received 25 pounds. This is a wonderful gesture by the Dutch and [we] in Hamburg are grateful.”