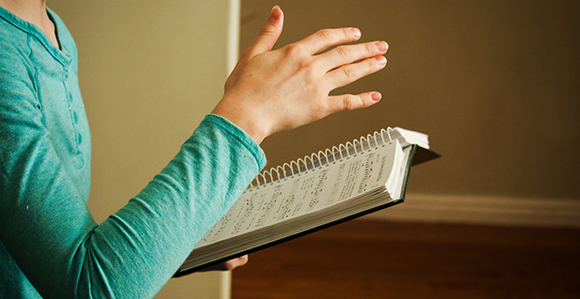 “For my soul delighteth in the song of the heart; yea, the song of the righteous is a prayer unto me, and it shall be answered with a blessing upon their heads” (D&C 25:12).

“At the approach of sunset, we seated ourselves, and sang another hymn. The music sounded beautifully upon the water, and had a salutary effect upon every heart, filling our souls with love and gratitude to God, for his manifold goodness toward us.” —Lucy Mack Smith, mother of Joseph Smith

In the spring of 1831, the Latter-day Saints had been commanded by revelation to leave their homes in New York and remove to the Kirtland, Ohio, area. Some, including the Prophet Joseph Smith, had gone on ahead. It fell to his mother, Lucy Mack Smith, to lead a company of 80 Church members from the Waterloo Branch down the Erie Canal by flatboat.

In the face of hardship and danger, she showed great courage and leadership.

Writing in her autobiographical work The History of Joseph Smith by His Mother, she recounted the following incident that occurred during that journey:

“I … called the brethren and sisters together, and reminded them that we were traveling by the commandment of the Lord, as much as Father Lehi was, when he left Jerusalem; and if faithful we had the same reasons to expect the blessings of God. … We then seated ourselves and sang a hymn. The captain was so delighted with the music that he called to the mate, saying, ‘Do come here, and steer the boat; for I must hear that singing.’ He afterwards expressed his pleasure at seeing such an appearance of devotion among us, stating that his wife had refused to accompany him, on account of her prejudice against us, which he very much regretted.

“At the approach of sunset, we seated ourselves, and sang another hymn. The music sounded beautifully upon the water, and had a salutary effect upon every heart, filling our souls with love and gratitude to God, for his manifold goodness toward us.”

Lucy’s experience is reminiscent of another account, this one by a non-Mormon, the famed British author Charles Dickens.

As recounted in his book The Uncommercial Traveler, Dickens as journalist had boarded an emigrant ship, Amazon, docked in London, its passengers being Latter-day Saints who were bound for America and the Mormon settlement in faraway Utah territory.

Among the circumstances that contributed to the author’s overall favorable impression of the Mormon emigrants was an onboard choir, which he described as “very popular and pleasant; and there was to have been a Band, only the Cornet was late in coming on board.”

A few passages later, the author commented regarding the Latter-day Saint passengers: “I went on board their ship to bear testimony against them if they deserved it, as I fully believed they would; to my great astonishment, they did not deserve it; and my predispositions and tendencies must not affect me as an honest witness, I went over the Amazon’s side, feeling it impossible to deny that, so far, some remarkable influence had produced a remarkable result, which better-known influences have often missed.”

Charles Dickens’s observation brings to mind the group of pioneer Latter-day Saint immigrants from Wales who, upon their arrival in the valley of the Great Salt Lake, formed the nucleus of the now world-renowned Mormon Tabernacle Choir. Through numerous concerts, radio and television broadcasts, recordings, and tours—the latest of which will begin in western Europe a few days from now—the choir has long been a global ambassador for the Church of faith, peace, goodwill, and love. Untold millions of hearts have been touched as the choir has embodied the Latter-day Saint aspiration expressed by the Prophet Joseph Smith in the thirteenth article of faith: “If there is anything virtuous, lovely, or of good report or praiseworthy, we seek after these things.”

The choir, with its sister organization the Orchestra at Temple Square, is a jewel of the Church and is indeed a missionary tool to spread the gospel of Christ.

But this tradition of choral music in the Church is not exclusive to the Mormon Tabernacle Choir; it pervades the entire Church, sustaining a tradition that evidently was present in the early Church as founded by the mortal Messiah Himself (see Matthew 26:30).

Reads the preface to the current LDS hymnbook: “Three months after the Church was organized, the Lord, through the Prophet Joseph Smith, instructed Joseph’s wife, Emma, to make a selection of sacred hymns for the Church: ‘For my soul delighteth in the song of the heart; yea, the song of the righteous is a prayer unto me, and it shall be answered with a blessing upon their heads’ (D&C 25:12).”

Sister Emma’s selection and subsequent compilations have contained some of the best of Christian hymnody of the day combined with indigenous Latter-day Saint compositions and texts. These have been augmented over the years with more contemporary works, resulting in the excellent hymnbook we use today.

“Inspirational music is an essential part of our church meetings,” the First Presidency admonishes in the hymnbook preface. “The hymns invite the Spirit of the Lord, create a feeling of reverence, unify us as members, and provide a way for us to offer praises to the Lord.”

In addition to congregational singing, the Church’s handbook directs, “Every ward should make an effort to have an active ward choir that sings in sacrament meeting at least once a month.”

Many Church members, diffident about their choral ability, have gained confidence, skill, and joy over time by magnifying their talents musically as they join with their brothers and sisters in choir singing.

From the chorus onboard the flatboat with Lucy Mack Smith or the singing passengers observed by Charles Dickens onboard the Amazon down to today’s ward or branch choirs, beautiful choral music has been woven into the fabric of Latter-day Saint worship. May it ever be a hallmark of the Church of Jesus Christ as we praise the Lord and bless those around us with the gospel of peace as expressed in song.