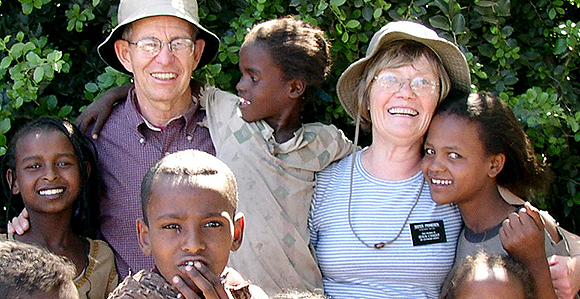 “We have a responsibility to extend help as well as hope to the hungry, to the homeless, and to the downtrodden both home and abroad.” —President Thomas S. Monson

It has been 30 years since Latter-day Saints participated in a special fast on January 27, 1985, to help famine victims in Ethiopia—marking the beginning of what would become LDS Charities.

After the fast, Elder Ballard, then of the Presidency of the Seventy and now a member of the Quorum of the Twelve Apostles, and Elder Glenn L. Pace, then managing director of the Church’s Welfare Department and now an emeritus General Authority, traveled to Ethiopia to determine how best to use $6 million raised by Latter-day Saints in the fast.

There they visited a camp that housed 120,000 people living in tents. However, it was the 30,000 people outside the camp—those who had arrived at the gate after traveling hundreds of miles to find relief from starvation, only to learn there was a waiting list to get in—who captured the hearts of two visiting officials from Salt Lake City.

Some approached the Church leaders. “Doctor, doctor!” they called out.

“It was a life-changing experience,” recalled Elder Ballard in a 2010 Church News interview. “The poverty, the sickness, the desperate circumstances that occurred there—it was just overwhelming” (“Fast for Ethiopia Accelerated Work,” Church News, Feb. 6, 2010).

Thirty years after their historic visit and the Church’s special fast that set the visit in motion, Latter-day Saints continue to reach out to those in need.

The Church has been dedicated to helping the poor and needy since the time of Joseph Smith. But this 1985 effort to help African famine victims accelerated the work. In addition to the first fast, Latter-day Saints participated in a second fast in November 1985 that raised another $5 million for hunger relief.

“While the Church has always responded to the suffering caused by various disasters, the Ethiopian famine triggered a more methodical and organized effort than had been experienced before,” Elder Pace said during a 2010 Church News interview.

In the 30 years since that fast, the Church has sent $1.2 billion in assistance to those in need. That includes food, medical supplies, clothing, and hygiene, newborn, and school kits. LDS Charities has also provided long-term aid through initiatives including wheelchairs, clean water, vision care, neonatal resuscitation training, and immunizations. To make the most of every humanitarian dollar, the Church also partners with other humanitarian organizations to help those in need.

“We have a responsibility to extend help as well as hope to the hungry, to the homeless, and to the downtrodden both home and abroad,” said President Thomas S. Monson during his April 1990 general conference address.

“Such assistance is being provided for the blessing of all. In a host of cities, where need has outdistanced help, lives have been lifted, hearts have been touched, and the frown of despair has been transformed to the smile of confidence, thanks to the generosity of the Church membership” (“Conference Is Here”).

With only a few major exceptions—fasts for Ethiopian hunger relief in 1985 and the Churchwide fast for Southeast Asia tsunami victims in 2005—fast offering donations are generally used for assisting members of the Church with welfare needs. Humanitarian assistance, on the other hand, is for people of all faiths and is generally funded by humanitarian donations. The 1985 fast marked the first time the Church collected large funds exclusively for humanitarian work.

But after that event, people across the globe continued to trust the Church with their humanitarian dollars. As a result, the First Presidency suggested in December 1991 that members wanting to specifically give to humanitarian work performed by the Church could designate it on the “other” line of their donation slip.

Five years later, in 1996, the slip was modified to include a specific line for humanitarian donations.

Today, in addition to the slip, members may provide support for humanitarian work by donating online, donating through LDS Philanthropies, giving items to the Deseret Industries, or serving at some of the hundreds of established Church welfare facilities located around the world.

The Church guarantees that every penny donated to the humanitarian fund is used for the care of the poor and the needy.

That includes a man in Ethiopia who stumbled into the camp in 1985 with a baby. The man had carried the baby 50 to 75 miles after finding him on a roadside near a dead woman he assumed was the child’s mother.

“As he arrived thirsty, hungry, and delirious, the first words he uttered were, ‘What can be done for this baby?’” recalled Elder Pace. “Can anyone doubt the love the Savior felt for this man? I have never loved a stranger more.”

“Today, some are out of work, out of money, out of self-confidence. Hunger haunts their lives, and discouragement dogs their paths,” said President Monson during his October 1995 general conference address. “But help is here—even food for the hungry, clothing for the naked, and shelter for the homeless” (“Patience—A Heavenly Virtue”).

Following in the Savior’s footsteps, Latter-day Saints reach out to “those throughout the world who are hungry; there are those who are destitute,” said President Monson during his October 2008 general conference address. “Working together, we can alleviate suffering and provide for those in need” (“Until We Meet Again”).