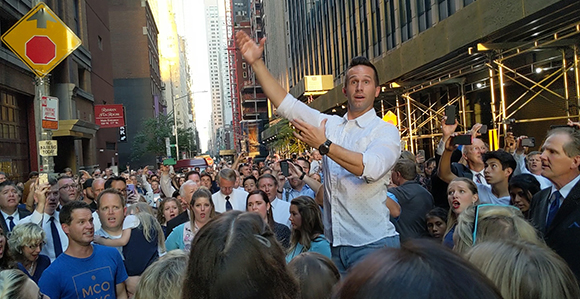 The power outage that hit the Upper West Side of Manhattan, New York, Saturday night, July 13, caused a large group of members of The Church of Jesus Christ of Latter-day Saints to miss out on a likely once-in-a-lifetime opportunity. But it provided them a bigger chance to share testimony of the Savior than they ever could have thought.

Hundreds of Church members of all ages from Utah and California—joined by famed violinist Jenny Oaks Baker and soprano Erin Morley—were slated to perform at the iconic Carnegie Hall at 8:30 p.m. that evening with Millennial Choirs and Orchestras, a nonprofit organization started in Utah by brothers Brett and Brandon Stewart, both members of the Church.

Previous to that night’s concert, MCO held two other performances in Carnegie Hall, featuring musicians from Arizona, Texas, and Idaho—one on Friday night and one on Saturday afternoon. All musicians paid their own way to New York.

Call time for the Saturday-evening concert was 5:00 p.m., and eventually the musicians made their way to the main stage to rehearse. At about 7:00 p.m., all the lights in the building, save some lamps on orchestra members’ music stands, went out. Initially, many thought lights were just being tested or that perhaps it was practice for something that would happen during the show, so they continued rehearsing for what some choir members estimated was about 15 minutes.

Ultimately, the group was given orders to evacuate the building. Men were instructed to go out one door, women out another, teenagers out another, and children out yet another.

Prior to evacuating, Brett Stewart requested to offer a short prayer, in which he petitioned for safety and for the lights to come back on if it were the Lord’s will. Multiple people reported the evacuation process went rather smoothly, particularly given the fact there were so many children in the building.

Accounts vary based on where people ended up outside, but at about 7:30, different groups of musicians started separately singing songs they had either previously performed or would have performed that night.

“Singing on the curbside had a feel to it of people exercising their faith, not really knowing what to do in kind of a disaster-like situation,” said Bryan Tanner, a choir member from Utah. “It’s kind of a fearlessness thing, like, ‘This is a way we can express our faith.’”

As MCO members sang both patriotic songs and Church hymns led by their conductors, crowds began to gather to listen. Soon, the once-separated groups of singers united together to sing, and an entire block was packed full of people. 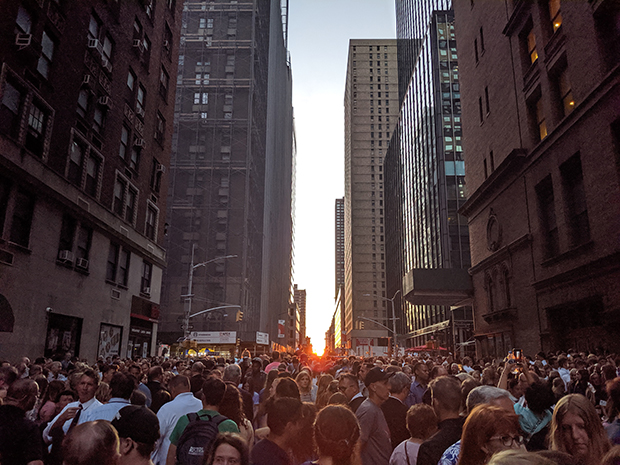 Crowds gather on the street in Manhattan, New York, to hear musicians from Millennial Choirs and Orchestras sing on Saturday, July 13, 2019. Photo courtesy of Jeff Lockhart.

At about eight o’clock, the concert was announced as canceled. It was a tough moment for many who had made great commitments in time and money to travel, but there was a general feeling of positivity in the midst of the disappointment.

As time wore on, MCO members could sense the growing crowds watching, listening, and recording the singing on their phones, but they had no idea that any of the videos would go viral.

In the social media age, however, that’s exactly what happened. One video alone of the choir singing “I Believe in Christ”—which was posted on Twitter by a New York resident—had been viewed 4.81 million times by Tuesday afternoon, July 16.

I guess this is what they call a New York moment. After being trapped on the F for an hour because of the power outage I emerged to see dark restaurants & traffic lights, civilians directing traffic, & an evacuated Carnegie Hall concert happening in the street. #nyc #Blackout pic.twitter.com/3p9UWtRrel

Numerous choir members recognized how the circumstances allowed them to reach far more people than the roughly 2,800 who would have fit into Carnegie Hall’s Stern Auditorium.

“I felt like the lights would come on and it would work out,” said Emily Ball, the conductor’s assistant for the youth choir in Utah. “I realized later it did work out; it’s just not our way. It’s Heavenly Father’s way of working out, just like always in life.”

Added Amber Toney, “This wasn’t the audience we planned for, but obviously it needed to work out this way for some reason. . . . It’s pretty incredible.”

Jason Rivera brought his family on the trip and was frustrated he didn’t get to perform in Carnegie Hall; like others, he was reminded of an important lesson.

“Heavenly Father works in unexpected ways,” he said. “Sometimes it feels like a disappointment but it turns out to be a huge blessing, and that goes for many, many other situations that everyone goes through every day.”

Here is a collection of videos that have been compiled of the group singing.