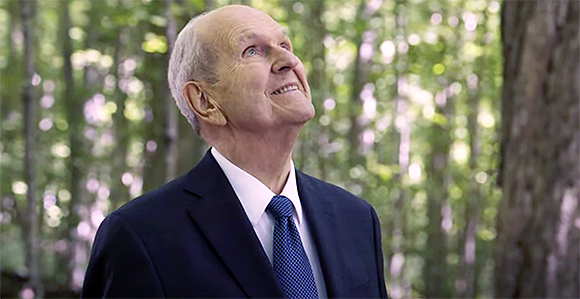 President Russell M. Nelson stands in the Sacred Grove, in Palmyra, New York, and looks up while filming the video announcing the new bicentennial proclamation of the Church.

In preparation for the 200th anniversary of the First Vision, President Russell M. Nelson retraced the steps of the Prophet Joseph Smith into the Sacred Grove and delivered a bold proclamation to the world declaring the ongoing Restoration of the Church of Jesus Christ.

In a new Church News video, “A Sacred Proclamation,” President Bingham and President Jones recount “the profound privilege” of standing in the Sacred Grove as President Russell M. Nelson spoke the words of “The Restoration of the Fulness of the Gospel of Jesus Christ: A Bicentennial Proclamation to the World.”

“I remember, prior to the filming beginning, when President Nelson looked up—just for a moment—but he looked up to the heavens,” said President Jones. “And at that moment I thought, ‘The heavens truly are just as open as they were when the Prophet Joseph was in that grove.’

“It was a tender experience to witness and to feel the spirit that was there as President Nelson spoke those beautiful words.”

President Bingham called it a “remarkable experience” to listen to the proclamation “delivered by our 95-year-old prophet, who is strong and vital and has all the keys of the kingdom. . . .

“I felt very highly honored to be one of the two called leaders who were there, observing in quiet hush, in reverence, in that beautiful setting.”