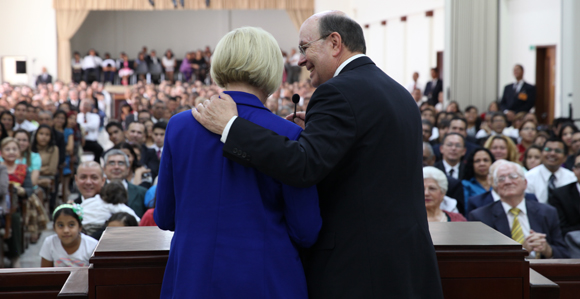 Elder Quentin L. Cook of the Quorum of the Twelve Apostles and his wife, sister Mary Cook, speak to members in Venezuela.

Elder Quentin L. Cook of the Quorum of the Twelve and Elder Tad R. Callister of the Presidency of the Seventy traveled to Venezuela and Peru Aug. 16 to 26, meeting with members and missionaries and conducting an area review and priesthood leadership training meetings.

In each country Elder Cook and Elder Callister said they met local members and leaders who were “outstanding and spiritually strong” and who “focused on their temple covenants.”

Elder Cook and Elder Callister visited Venezuela, located on the northern coast of South America, on Aug. 16-18. During an adult devotional to a large congregation that was broadcast throughout the country, Elder Cook left an apostolic blessing on the people and country that face many challenges. He also bore witness of the Savior and the Atonement.

“I know that there’s been hardship in their lives that are beyond what most of the Saints across the world face,” he said in a discussion with the Church News. “And I felt inspired to talk to them about how the Savior’s Atonement overcomes not only sin and death, not only allows us to have exaltation and salvation, but that it does cover all of the heartache, all of the heartbreak, all of the evils, all of the seeming unfairness of life.”

The Church has a strong and  growing membership in Venezuela. The first branch of the Church was organized in the country in 1966 and the Venezuela Mission was created in July 1971. Today the country has some 150,000 members, four missions and a temple, dedicated in 2000 by President Gordon B. Hinckley.

Elder Cook’s assignment in Venezuela was the first time in many years an apostle could meet with members and conduct large-scale priesthood leadership meetings in the country.

He said “the kindness and the sweet approach” of the Latter-day Saints in Venezuela and their “obvious love of the Savior” was remarkable. Being with them was “a very tender, sweet experience.”

Elder Callister said the Venezuelan Latter-day Saints were “hungry to hear the words of an apostle.”

“They love the gospel and want to be in touch with some of the leaders.”

He added that although many in the country struggle economically “they are happy. They are positive. They are very receptive to all the messages. They had a spiritual hunger in their eyes and their hearts to be fed.”

Because of the political climate in Venezuela, North American missionaries were removed from the country in 2005.

Elder Cook—then executive director of the Church’s Missionary Department—said because native Venezuelan missionaries made up only about 50 percent of the missionary force in the country at the time, the Church looked at consolidating the four missions.

“The leadership in Venezuela said, ‘We know that the Venezuelan missionaries left could only fill two normal-size missions, but please don’t do that. We will rise up, and we will call additional young people and we will fill those missions.’ And they’ve done it.”

Elder Cook said during his recent trip he looked at the missionaries with tender feelings.

“They were spiritually strong and you could just tell that they were fabulous. And the success they’ve been having is rather remarkable,” he said, noting that Venezuela is one of the higher baptizing missions in the Church. “The members support them in a wonderful way.”

He noted that almost every young Latter-day Saint in Venezuela, who serves a mission, does so in Venezuela. “They need the missionaries here and they serve here.”

Many of those young people become leaders in the country when they complete their missions.

In addition, the Caracas Venezuela Temple has been a great blessing, Elder Cook said, noting that he and Elder Callister met one group of local members that had traveled eight hours to get to the temple. “They looked wonderful and they were so excited,” he said. “They are focusing on the covenants they’ve made and they’re renewing those in their sacrament meetings. … They are going forward in a wonderful fashion there.”

In Peru, a country rich with history, Elder Cook and Elder Callister held numerous member and priesthood leadership meetings and visited seven of the 12 missions in the country during their travels Aug. 19-26.

Peru, located in western South America, was once home to many ancient cultures, including the Norte Chico civilization (one of the oldest in the world) and the Inca Empire. The Spanish came to the area in the 16th century. “The unique thing about Peru is that they have a history that they understand,” said Elder Cook, noting that Church members honor their rich history.

That history also makes local Latter-day Saints more aware of the Book of Mormon. Peruvian Church members “relate to the principles in the Book of Mormon because those teachings could also be found, in many respects, in their own history,” he explained.

Elder Cook’s visit to Peru came shortly after Elder D. Todd Christofferson of the Quorum of the Twelve organized the 100th stake in Peru, which took place on June 30.

Peru has more than a half-million members, 12 missions, a temple in the capital city, and plans to build two more — one in Trujillo and one in Arequipa. Only three other nations — the United States, Mexico and Brazil — have reached the 100-stake milestone.

Elder Callister said one of the highlights of the visit to Peru was participating in an area review with the Area Presidency and Area Seventies in the country. “They each made a report on what they are doing in their areas,” he said. “They are men who are articulate and devoted. It was pleasing to see how seasoned the leaders are for the time the gospel has been in Peru.”

During member meetings, Elder Cook told the Peruvian Latter-day Saints that there “needs to be cohesion and love and unity in the family” and that the family needs to sacrifice to help the rising generation.

In addition, he said, the local members not only need to prepare missionaries to enter the mission field, but they also need to help the missionaries assigned to serve in their own areas find teaching opportunities.

“I thought the response was remarkable,” he said.

He taught members that the cooperation between missionaries and Church members is one way the Lord is hastening the work, noting that there will probably be 85,000 missionaries in the field by the end of the year.

“There has never been, in this dispensation or any other dispensation, anything like that,” Elder Cook said.

Elder Cook noted that despite recent economic success in Peru, there are still large numbers of Latter-day Saints who are very poor. “They recognize that what is really important is to have the gospel and to have the blessings of the temple and to know that you can be reunited with your family, with God the Father and Jesus Christ,” he said. “They have that. They know that.”