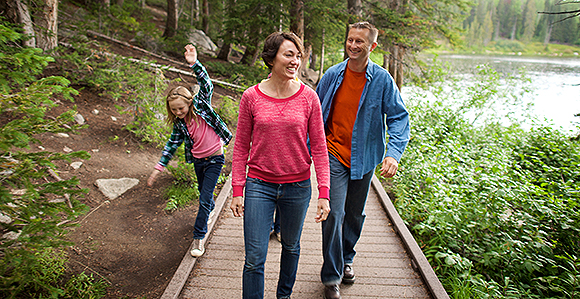 A family enjoys time together in the outdoors. Summer can also be the perfect time to learn or teach gospel principles.

Summer—a time many go camping, hiking, and swimming—can also be the perfect time to learn or teach gospel principles. These seven summer stories from General Authorities can serve as gentle reminders that gospel knowledge can come throughout the summer holidays.

During the October 2018 general conference, Elder Gerrit W. Gong of the Quorum of the Twelve Apostles spoke about building personal campfires of faith. Elder Gong recalled a memory he had of painting with Elder Richard G. Scott, using Elder Scott’s painting Campfire at Sunset as a model for Elder Gong to paint.

Together, they talked about the similarities between the campfire they painted and personal faith. The light and warmth of the campfire—a metaphor for memories, experiences, and personal history of faith in God’s goodness—can carry each person through the dark, lonely night of uncertainty. And when the night is over, the dawn of faith will come. Read “Our Campfire of Faith.”

Elder Jeffrey R. Holland of the Quorum of the Twelve Apostles told a story in April 2015 general conference of two teenage brothers, Jimmy and John, who decided to scale a canyon wall in Southern Utah. They realized too late that they both couldn’t easily get to the top of the cliff, so John, the older of the two, hoisted Jimmy to safety atop the ledge. Just as John felt he would die, his younger brother pulled him to safety.

Elder Holland compared this story to the Fall of Adam and how each person has a brother—the Savior—who, as our Brother, will pull us to the safety of salvation through His divine mercy. Read “Where Justice, Love, and Mercy Meet.”

The Power of the Holy Ghost

In April 2017 general conference, Elder Gary E. Stevenson of the Quorum of the Twelve Apostles told a personal story from a childhood hiking trip. When Elder Stevenson’s father took him on a summer hike, Elder Stevenson jumped from rock to rock along the sides of the trail. As Elder Stevenson began to climb on top of a large rock, his father grabbed him by the belt and told him to keep on the trail.

Soon after, Elder Stevenson noticed a large rattlesnake on top of the rock he was climbing minutes earlier. Elder Stevenson asked his dad how he knew the snake was there, and his father taught him about the power of the Holy Ghost. Elder Stevenson said he has never forgotten what he learned that day.

Read “How Does the Holy Ghost Help You?”

God’s Divine Power to Save

President Thomas S. Monson, then First Counselor in the First Presidency, told a story from his youth in October 1995 general conference. As a 12- or 13-year-old boy, President Monson floated down the Provo River in an inflated inner tube from a tractor tire. He came upon a family shouting for someone to help save one of their family members from drowning in a fierce whirlpool. President Monson grabbed the woman out of the water and brought her to her family, saving the woman’s life.

President Monson said he learned that God knows each one of His children and “generously permits us to see and to share His divine power to save”—a message for members to work toward the saving of souls through missionary efforts.

When God Speaks to Us

When Elder D. Todd Christofferson of the Quorum of the Twelve Apostles was a teenager, he participated in the Hill Cumorah Pageant in Palmyra, New York, according to an article in the August 2008 Ensign and Liahona magazines. One evening, he went to the Sacred Grove to pray about the truthfulness of the Book of Mormon and Joseph Smith, but nothing happened. A month after his prayer, Elder Christofferson received the answer to his prayer while reading in the Book of Mormon.

Elder Christofferson said he learned that “we can’t dictate to God when, where, or how He will speak to us. We just have to be open to receive what He disposes, when He disposes it. It comes according to His will.”

Keeping a Positive Outlook on Life

During October 2015 general conference, then President Dieter F. Uchtdorf, as Second Counselor in the First Presidency, gave an address about an 11-year-old named Eva who was sent to spend her summer at her great-aunt Rose’s house. Even though Eva wanted to hate everything about staying with Rose, she realized she loved being around Rose. Eva wanted to know how Rose could always be so happy, and Rose told her it was faith, hope, and love that had guided her through her good and bad experiences and helped her to keep a positive outlook on life. Years later, Eva was still grateful for the lessons she learned from the summer she spent with her great-aunt Rose.

Read “A Summer with Great-Aunt Rose.”

Making It Safely Home to God

In October 2014 general conference, then Elder M. Russell Ballard of the Quorum of the Twelve Apostles gave an address about staying steadfast in the gospel, even when life’s challenges and circumstances are difficult to manage.

Elder Ballard used river rafting as a metaphor for life and essential supplies, such as life jackets and river guides, for spiritual tools that can help navigate earthly life. Through earnest prayer, gospel study, and covenant keeping, all of God’s children can make it safely home.

Read “Stay in the Boat and Hold On!”