Update on Missionary Injured in Car Accident in Canada 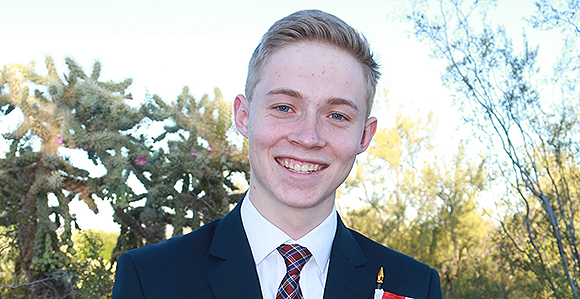 Elder Dallin Thompson, 19, from Sahuarita, Arizona, was injured in a September 13, 2019, car accident. Photo courtesy of the Thompson family.

Elder Dallin Thompson, the missionary who was critically injured last month in a vehicle accident in Canada, has been moved back to his home state for continued treatment.

“That’s a good thing,” the missionary’s mother, Holly Thompson, told the Church News. “We’re closer to our family and our support system now.”

Elder Thompson, 19, of Sahuarita, Arizona, and his companion, Elder Bryant Keck, 19, of Sanford, Colorado, were driving September 13 in Kamloops, British Columbia, when their vehicle collided with a truck.

Elder Keck died a few days after the accident. Elder Thompson remained in a Vancouver-area hospital until he could be safely transported to a hospital in Arizona last Sunday.

The two elders were assigned to the Canada Vancouver Mission.

“He’s speaking a little more, and yesterday he threw a little football. That was exciting.”

Elder Thompson’s recovery is happening slowly—“but it seems like he just keeps doing new things each day, which is really good,” said his mother.

The missionary has also been moved out of the hospital’s intensive care unit.

Latter-day Saints and others across the globe have prayed for both Elder Keck and Elder Thompson and their families. Holly Thompson said they have been strengthened by the love and concern of others, be they friends or strangers.

“We have felt it worldwide, from every continent and from people we know and people we don’t know,” she said. “It’s definitely been a support for us.”

Holly Thompson said she was able to get to know Elder Keck’s mother, Kjerstina Keck, when the two of them were in Canada following the accident.

“She is an amazing lady who has a very strong spirit. She has been super supportive of us through all of this.”

Knowing so many people are concerned for Elder Thompson’s well-being, his mother was eager to share a few things about her son, who enjoys distance running and having fun.

“He’s a real easy-going kid [who] makes friends with everyone,” she said. “He worked hard to go on a mission—it’s what he really wanted to do.”

Elder Thompson arrived in the Vancouver mission last summer. He was welcomed by his mission president, President G. Blake Wahlen, and the president’s wife, Sister Jana Lee Wahlen. The Wahlens met the young elder at the Provo Missionary Training Center when they were all preparing for their respective assignments.

“Elder Thompson was part of the first group of missionaries we welcomed to the mission,” said President Wahlen.

Holly and Jared Thompson and their four children belong to the Anamax Ward, Sahuarita Arizona Stake. Dealing with the accident has been understandably difficult for Elder Thompson’s three younger siblings.