Under the Sea, Latter-day Saint Submarine Officer Kindles the Light of the Gospel 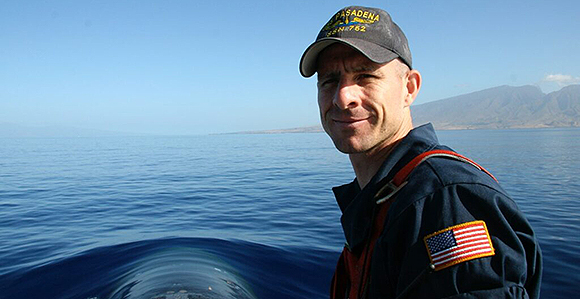 “First, I read my scriptures, every day. Second, I get down on my knees and talk to my Father in Heaven, every day. And third, I exercise, every day.” —Kelly Laing, U.S. navy commander

The Old Testament’s Jonah spent three days living in the belly of a whale deep below the waves.

Laing has spent more than half a decade performing his duties underwater as a submarine officer. And while the fearful Jonah was trying to escape the Lord, the returned-missionary-turned-sub-commander says many of the most divinely connected moments of his life have happened on top-secret missions happening far from the sun’s glare.

Despite the physical isolation defining submarine life, Laing said his daily decision to live the gospel has blessed him with the constant guidance of the Holy Ghost, both on land and at sea.

Such spiritual companionship, he added, is available to all Latter-day Saints—military or civilian—who determine to stay linked to the divine even while facing the challenges of daily life.

An Idaho native, Laing has spent more than two decades in the Navy’s submarine community after first enlisting in the U.S. Marine Corps. Being an active Church member in uniform has not always been easy for this husband and father of four. He told the Church News that his gospel beliefs have been challenged “more times than I can count.”

“But I also know that I’ve made it to where I’m at in life because I’ve lived the gospel,” he said.

Laing enjoys the story of Jonah and the whale. But whenever he’s about to embark on a submarine mission, his thoughts focus on another ancient mariner—the Book of Mormon’s brother of Jared.

“The Lord prepared the brother of Jared in so many ways,” he said. “He gave him directions and corrections and tools.”

But after building the vessels to voyage to the promised land, the brother of Jared realized they lacked light. He prayerfully petitioned for a solution. The Lord answered: “What will ye that I should do that ye may have light in your vessels?” (Ether 2:23).

“The Lord put it back on the brother of Jared,” said Laing. “The Lord wants us to do that. He’s going to ask us, ‘What would you have me do so you can have light in your vessel, light in your life, and light in your circumstances?’”

While at sea, the top-secret nature of Laing’s submarine missions doesn’t allow for office appointments with his bishop. He can’t call upon fellow priesthood quorum members when facing doubts or personal challenges. And the people he loves most—his wife, Heather, and their three sons and one daughter—are typically a world away.

But Laing said he never feels alone or adrift when performing the Navy’s “silent service.” No matter his circumstances, he makes a choice each day to be an active Latter-day Saint. That keeps him tied to the Lord.

To stay engaged in his relationship with the Lord, he adheres to a “personal constitution” that informs his daily decision-making. Whether serving on land or at sea, he does three things every day:

“First, I read my scriptures, every day. Second, I get down on my knees and talk to my Father in Heaven, every day. And third, I exercise, every day,” he said.

When serving at sea far from his home ward, he also participates in some form of weekly Sabbath-day services to partake of the sacrament and enjoy the fellowship of Latter-day Saint shipmates.

Laing has served on four submarines during his naval career, most recently as the commander of the U.S.S. Maine, an Ohio-class ballistic missile nuclear submarine. It’s been said that when the Maine is operational, the “boat” would rate as one of the most powerful nuclear nations on earth.

As a naval officer, he’s served on submarines carrying up to 185 sailors.

“And several times, I was the only person at Church for the first couple of weeks after [the deployment] started,” he said. “But I have always found someone who was just sitting in the woodworks. They just needed someone to step up.”

Laing was once deployed on a secret mission “in the enemy’s backyard.” Initially, only one person joined him for weekly Sabbath-day services. But as time passed, more shipmates began attending church. Eventually, a dozen people were gathering in the sub’s crowded wardroom for sacrament meeting and Sunday School.

“We had the largest attendance of servicemen’s groups on the submarine,” he said. “I’ve always found that if one person steps up and starts being proactive, others will follow.”

Most weeks underwater, Laing and his fellow worshippers utilized freshly baked bread for the sacrament. Other times, when bread was unavailable, they used things such as saltine crackers or cookies.

Laing vividly remembers a Sabbath-day service while commanding a deployment in a remote stretch of the North Pacific. The mission required that their submarine be at periscope depth at the same time as the Church gathering. Sea conditions, he remembered, “were horrible.”

Laing and his shipmates participating in that remote sacrament service realized that they were players in a true-to-life object lesson. Yes, the tempest was raging—but their hearts were strong. Renewing sacred covenants offered them peace.

“Our conversation that day focused on the story of the Master when he calmed the seas. We know that there are times when He won’t calm the seas because we need to become stronger sailors.”

But such moments, he added, “have helped me get through a lot of hard situations in my career.”

Because of the classified nature of submarine missions, Laing rarely enjoys internet access while at sea. Email service is typically spotty.

“We go ‘black’ and into a top-secret posture. No one can know our position, and we can’t have transmissions off the ship that would compromise our location.”

That means he doesn’t have regular access to Church-produced online resources that Latter-day Saints across the globe might take for granted. So before each deployment, he downloads general conference talks and other online assets.

“You can prepare months in advance—it just takes some planning,” he said.

Because of the stress and grueling work schedules, submariners such as Laing are anxious to relax and recharge whenever they arrive at foreign ports.

Again, choices must be made.

But Laing’s standards don’t prevent him from having a great time. The fitness and outdoor enthusiast enjoys organizing outings at foreign ports for his fellow submariners whenever possible.

“I’ve planned activities where we can get out and have fun—things like playing volleyball on the beach, going snorkeling or scuba diving, or going on an eco-adventure or visiting ruins.”

Planning such off-duty adventures “has also made it easier for other people to make the right decisions.”

Here’s the reality of serving on a submarine: long deployments require time apart from family and loved ones.

Holidays, birthdays, weddings, and baptisms are often missed. But despite the transient nature of his job, Laing said his family remains his anchor (pun intended).

While at sea, he gleans comfort in letters and photos from his wife and children. “And when I’m home, all my time is dedicated to my family and the Church and doing what my kids want to do,” he said.

He’s grateful for his wife, Heather, “who has kept me alive in the home, even when I was away.”

Laing is also a staunch believer in father’s blessings. He shares them often with each of his children. And when he’s preparing to ship out on a submarine deployment, he receives a priesthood blessing from his own dad.

His current shore assignment as a battalion officer at the U.S. Naval Academy offers much-appreciated access to the temple and traditional Church gatherings. He also serves as the first counselor in the bishopric of the Annapolis Ward, Annapolis Maryland Stake. 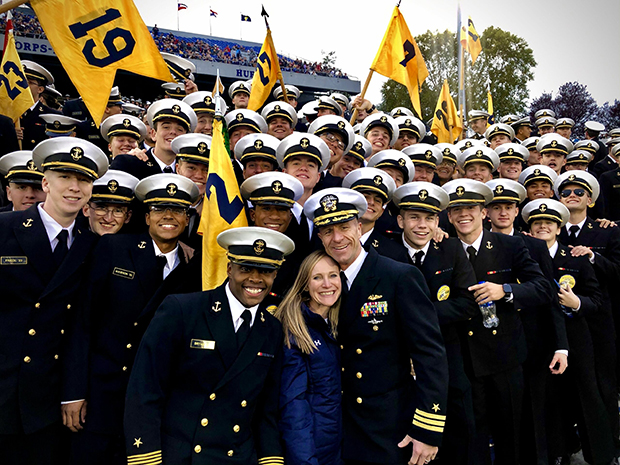 Kelly and Heather Laing, center, enjoy a fun moment at a Navy football game with midshipmen from the U.S. Naval Academy. Photo courtesy of Kelly Laing.

The Lord Knows His Children in Uniform

The armed forces provide Latter-day Saints unique opportunities to travel the world, hone valued professional skills, and serve others. But there are also difficulties—especially when serving far from home and away from traditional Church support.

But the Lord is eager to bless His children in uniform, said Laing. He wants to protect them from anything that would pull them from His companionship and principles.

Church members in the military must choose to be active agents in their own spiritual health, said Laing. “Number one, they need to find ways to put the Lord first in all that they do—both in their professional and personal lives.”

By doing so, “Heavenly Father and Jesus Christ will definitely consecrate their performance in the military and in their personal lives for the welfare of their souls,” he said. “Their military service will not be easy, but doors will be opened to them because they are living the principles of the gospel.”