Jim Loftus portrays George D. Watt, who was baptized in 1837 and became a member of the British Mission presidency, preaching to Scottish Saints.

“The pageant is playing a part in the work of salvation in the British Isles and Ireland.” —Stephen Kerr, pageant president

Spontaneous applause and cheering erupted as the “British Pageant—Truth Will Prevail” came to its powerful finale, a manifestation that the audience had just witnessed something remarkable and moving. Many left teary-eyed. As one cast member said, “It’s great to see people smiling whilst crying.”

On Wednesday evening July 31, a capacity audience of 1,650 filled a huge tent erected downhill of the Preston England Temple to witness the first performance of the British Pageant.

The First Presidency and Quorum of the Twelve gave approval in 2011 to develop a pageant to be performed on the grounds of the Preston England Temple that would recount the story of the message of the Restoration as presented by the first missionaries who arrived in England 176 years ago.

The pageant includes 33 core cast members, 300 family cast of all ages (there are two cast groups), a 150-voice choir, and a backstage crew of 25.

The pageant is not simply a theatrical production but an opportunity to explain that what transpired in the British Isles was part of a long tradition of the search for truth and struggle for religious freedom. Pageant president and former Area Seventy, Stephen Kerr observed, “As the British people share this story in the pageant, youth and families are strengthened, and future missionaries and leaders are prepared.”

The pageant is introduced in the context of the peoples of the British Isles as seekers of the truth. Persecuted reformers, such as William Tyndale, Ann Askew, and Hugh Latimer, who did much to lay the foundation of religious freedom, are featured before the audience is taken to 1837, when missionaries landed in Liverpool to open the door of salvation to the British Isles. They traveled first to Preston, arriving during elections. As they descended the coach, a banner was unfurled from a window above them, proclaiming, “Truth Will Prevail.” The missionaries immediately adopted this as the motto of their mission to England. 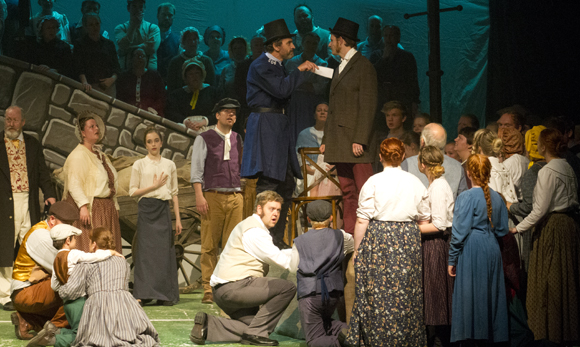 Barry Carter, left, portrays the constable who was sent to arrest Elder Wilford Woodruff, played by Jared Cowley, while he was preaching the gospel in Herefordshire. Photo by David MW Pickup.

The following day they preached to the congregation of the Reverend Fielding, the brother of missionary Joseph Fielding. Within the week, nine of Fielding’s flock sought baptism, which took place on Sunday morning July 30, 1837, in the nearby River Ribble, before a crowd of thousands. That simple event in Preston was the opening of a remarkable experience. There soon followed a torrent of converts, with some 1,600 joining in the eight months of this first mission, and many thousands more from across Great Britain over the following years. Most would emigrate, to the main body of the Church in Nauvoo, Ill., and later the Salt Lake Valley.

The central characters in the pageant narrative are members of the Ashton family from Lancashire, playing out their encounter with Heber C. Kimball and the struggles of a widowed father to come to terms with the conversion of his daughter, her later baptism, and intention to join the emigrating Saints. He decides to keep the family together and to accompany them. During the voyage he is converted, much to the joy of his children.

Combining original music specially composed for the pageant, with hymns of the Restoration, the script is true to the real words and experiences of the historical figures depicted. The pageant pulls all of this together in a shipboard scene of emigrants heading to Nauvoo. It concludes with the dramatic arrival of missionaries flowing in lines from the rear of the auditorium to join the cast on stage, to the strains of “Called to Serve.”

Prior to each performance, visitors were transported to 1837 with period activities on the grassy meadows below the temple. Cast members invited visitors to join them in country dancing, accompanied by a folk band. In the adjacent stake center, visitors were introduced to family history, and green-screen technology transported them back to Victorian England with a free sepia photograph in costume.

Scheduled for ten performances—the last of which is on Aug. 10—the British Pageant has been a positive force for change in the lives of participants and visitors. Driving home from one performance, a stage-crew member felt inspired to offer a ride to a family with young children making the trek to the overflow car park. Asked what they thought of the pageant, the husband responded, “Absolutely fabulous.” Asked then if he was a member, he replied, “No, but after tonight I’m going to be.”

Another non-LDS guest remarked to his host that he didn’t realize the Church had such deep roots in the United Kingdom. Referring to the religious reformers featured at the beginning of the pageant, he commented, “It is our destiny as Britons that the gospel of Jesus Christ should go forward; that is our obligation.” 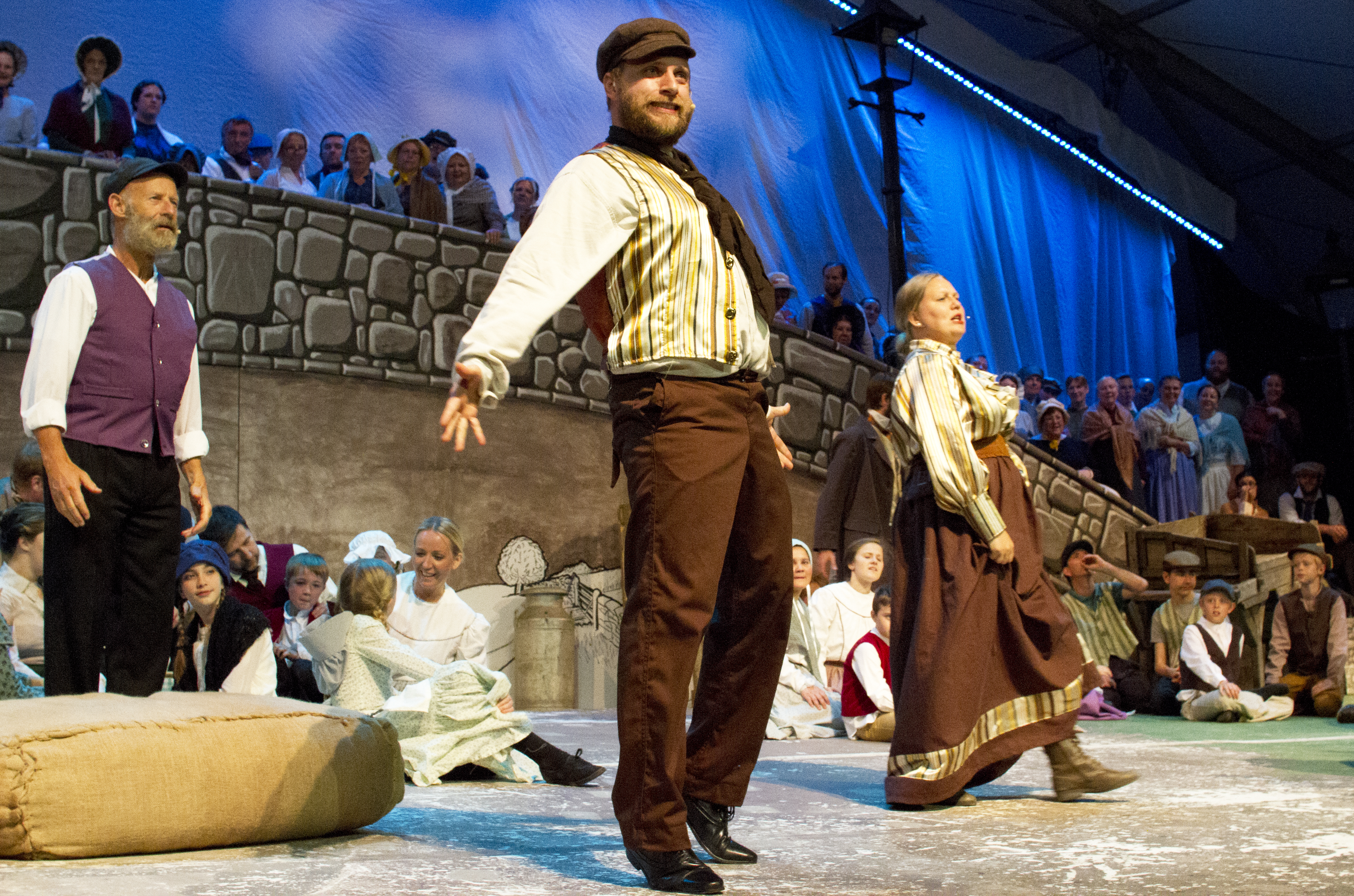 Seth Wilkins, center, plays role of Twistleton Turvey; at right, Rachel Pratt depicts his wife in pageant that tells the story of the Church in the British Isles. Photo by David MW Pickup.

After one of the performances, Elder Kerr explained, “The pageant is a loving tribute to all those who stood up for what they believed. It’s an invitation to the people of these islands to come to Jesus Christ. People are leaving the pageant with a tremendous spiritual experience personal to them.” He said some have asked to be baptized after having seen the performance. “The pageant is playing a part in the work of salvation in the British Isles and Ireland.”

Many cast members have had special experiences during the long hours of rehearsals and performances. One performer said, “We’re not putting on a show, we’re representing the Saints who have gone before us.”

Alexandra Johns, a member of the writing committee and stage director, is from the Channel Islands in southern England, and has been working on the pageant for several years. “There is great spiritual strength and talent among the members of the Church here, which shows in the performance.”

A cast couple said, “We learned we are not pretending, we really are Saints; we’re going to be different because of what we are doing here.”

President Kerr added, “The value to the Church of this pageant is the effect on the lives of members and their friends and neighbors. It’s much more than a theatrical performance. It’s an opportunity to share the gospel.”

A child cast member explained that her father had not been to Church for years, but now has felt the urge to come back.

Members Eleanor and Michael Marshall of the Leeds 3rd Ward, part of the family cast said, “These are real lives that are being told. There is a spirit of excitement and the importance of the family. It has had a real effect on our family.”

Ray Robinson, director of music and performing arts for the Priesthood Department, said, “There is great power in telling the story of the restoration with clarity and without backing away from the truth.”

Further, he said, “The value to the Church of this pageant is the effect on members’ lives. It isn’t worth the investment for just a theatrical performance, but if it helps members understand how to share the gospel, then it’s worth it.”

The legacy of the early missionaries to Great Britain is still unfolding. At the groundbreaking ceremony for the Preston England Temple in 1994, President Gordon B. Hinckley said, “Truth ... will continue to prevail and whereas there are thousands, tens of thousands of members of the Church in this wonderful land, there will be hundreds and hundreds of thousands. I have no doubt of that and do not hesitate in saying so.”

Staged close to that location, the British Pageant is helping bring President Hinckley’s words to pass. As the lead character Arthur Ashton, played by Matthew McKenzie, explains in the pageant, “It’s an unfinished story.”

President Kerr said, “This truly is a British Pageant, created and presented by the British Saints, with invaluable counsel, encouragement and support from the headquarters of the Church.”

Across the British Isles, members of the Church and full-time missionaries are saying to their friends and neighbors, “Come and see” the miracle of the restoration as it unfolded here. Through the pageant, the Lord is truly hastening His work.”

Those desiring to download the pageant music may do so by visiting mormon.org.uk/pageant.