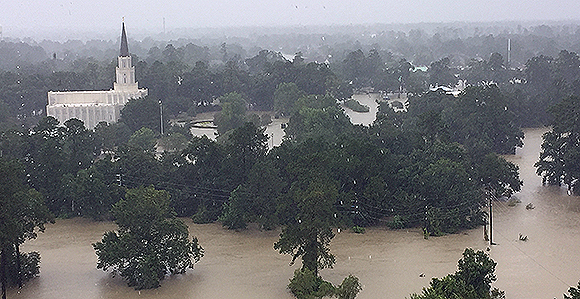 The Houston Texas Temple as floodwaters rise in the aftermath of Hurricane Harvey, Monday, August 28, 2017.

“As a Latter-day Saint, I have a lot of faith. This tragedy is an opportunity for me and others to serve.” —Carlos Munoz, Church member in Houston, Texas

Dozens of Latter-day Saint families are among the legions being forced from their homes in search of shelter and dry ground as Tropical Storm Harvey continues its devastating and historic assault across southeast Texas.

Hit especially hard in the unrelenting storm is Houston—the United States’ fourth largest city and home to several LDS stakes and missions. Thousands in the city have had to be rescued from inundated homes, even as rainfall overwhelms area bayous and waterways.

Local and federal civil officials are calling the disaster a “human crisis” that is just beginning.

All missionaries are safe. Meanwhile, there have been no reports of injuries to members living in impacted areas, although local priesthood leaders continue the process of gathering information during a dynamic, evolving disaster situation.

Mission and stake leaders in the region told the Church News that communication has been generally reliable throughout the storm, allowing them to keep in touch with the people they serve.

“We are keeping everybody inside his or her apartment,” he added.

The elders and sisters assigned to the Houston South Mission communicate each day with mission headquarters via phone calls or text messages to ensure all are safe and accounted for.

President Hall admitted the missionaries are anxious to get out of their apartments and serve. They have permission to provide help inside their apartment complexes and immediate neighborhoods, when feasible.

“Our number one priority is their safety,” he said.

The mission has utilized Facebook to keep concerned parents updated on the developing situation.

Missionaries living in areas of the predicted storm path took precautions prior to Harvey's arrival, gathering enough food and water to shelter for several days. Some missionaries were moved out of areas where the greatest potential for flooding existed, according to MormonNewsroom.org.

Some of the most heavily impacted flood regions are within the boundaries of the Houston Texas Stake, where the homes of about 50 Mormon families have been flooded.

“In all honesty, we are doing better than I would have thought,” said Houston Texas Stake President Dean Andersen.

Most of the impacted LDS families have relocated to the homes of friends or relatives. A few others have opted to stay inside their homes or find shelter inside one of the nearby Church meetinghouses.

“We even have two bishops with 3 feet of water in their homes,” said President Andersen.

Local bayous have made the Houston Texas Stake and neighboring congregations especially vulnerable to flooding in recent years.

“But this is a historic event,” said President Andersen, who has called Houston home for more than 30 years.

Photos of rising floodwaters breaching the Houston Texas Temple have circulated across social media. For Mormons worldwide, images of the threatened temple have become sobering symbols of the ongoing disaster.

Using kayaks, Christine Haines, daughter of Albert Haines, a counselor in the Houston Texas Temple presidency, and a friend check on the flooding surrounding the temple on Monday, August 28, 2017. Photo courtesy of the Haines family. 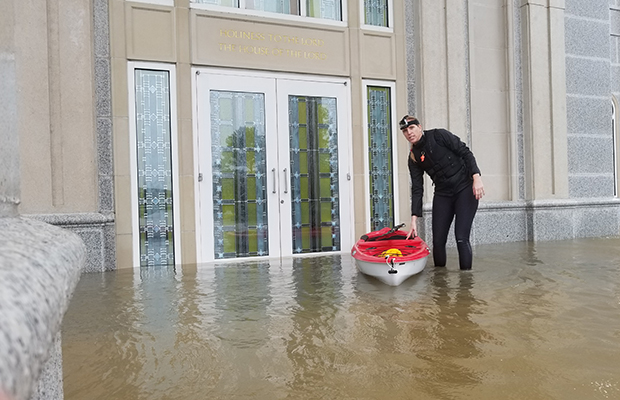 Using kayaks, Christine Haines, daughter of Albert Haines, a counselor in the Houston Texas Temple presidency, and a friend check on the flooding surrounding the temple on Monday, August 28, 2017. Photo courtesy of the Haines family.

“The creek became a river, and the current is so strong that it’s been dangerous to even try and approach the temple,” temple president Marshall Hayes told MormonNewsroom.org. Nearby Cypress Creek, he added, rose by more than 20 feet.

“It appears water to the depth of four or five inches has gone inside the temple,” said President Hayes. “That includes a baptistry, a marriage waiting room, dressing rooms, kitchen, and laundry. We haven’t been able to go inside, so we really don’t know the extent of the damage.”

The temple, located in the community of Klein, has been closed since Saturday morning as the wind and rain approached the Houston area. Dedicated August 26, 2000, it serves Latter-day Saints in the greater Houston area and surrounding cities.

Carlos Munoz has lived in Houston since 1982. He knows his adopted home is often the target of dramatic weather. Still, he’s been staggered by Harvey’s wrath.

“I’ve survived several hurricanes and tropical storms, but I’ve never seen this sort of disaster,” he said. “As a Latter-day Saint, I have a lot of faith. This tragedy is an opportunity for me and others to serve.”

Several meetinghouses in the regions have reportedly experienced water damage. Some Church-owned buildings are being used to shelter displaced people and function as a staging center for relief and cleanup supplies.

He and his fellow members in the regions have been sustained by a comforting fact: no Latter-day Saints in the Corpus Christi stake were lost in the disaster. “Thankfully, most of the members evacuated from the [heavily hit] areas.”

President Cluff is also thankful for the Church’s ongoing support. He has worked closely with humanitarian relief officials in Salt Lake City and knows people across the globe are asking God to bless Texas.

“Just knowing people are remembering us in their prayers—that makes a huge difference.”

Church welfare officials began preparing for Harvey prior to the storm’s movement across southeast Texas. On August 25, workers at the Bishops’ Central Storehouse in Salt Lake City loaded pallets of water and other emergency provisions on semi-trucks. 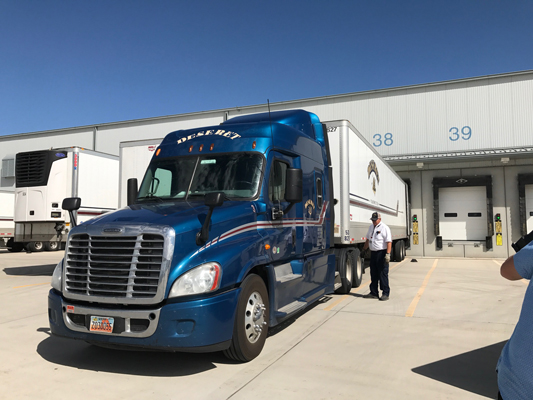 On Friday, August 25, 2017, workers at the Bishops’ Central Storehouse of the Church load pallets of water and other supplies on several trucks in Salt Lake City to be sent to Houston following rising floodwaters caused by Hurricane Harvey.

“This is an opportunity, even though it’s a very adverse situation and there will be people affected adversely, but this allows us all to come together,” Central Storehouse manager John Hopkins told MormonNewsroom.org.

Anyone wishing to provide support for the Church's effort to aid those in need in Texas is encouraged to make a donation to the Church's Humanitarian Fund. 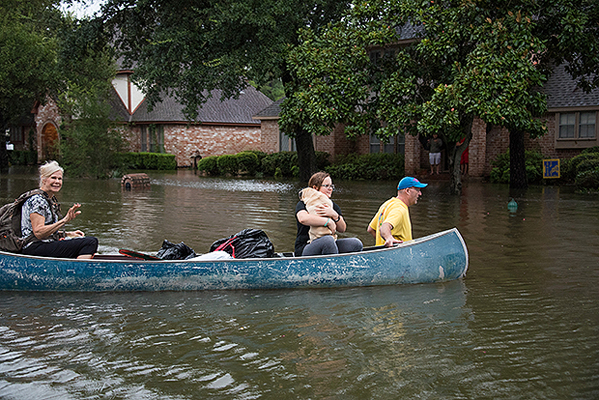 LDS Church volunteers use kayaks to evacuate the Robert A. Boyd family and belongings from their flooded Spring, Texas, home on Monday, August 28, 2017. Photo courtesy of Robert A. Boyd. 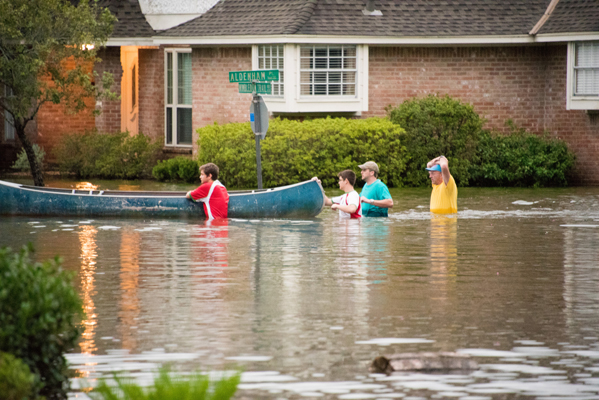 A dozen LDS Church volunteers—including some donning the yellow Mormon Helping Hands vests—use kayaks and canoes to evacuate the Robert A. Boyd family and belongings from their flooded Spring, Texas, home on Monday, August 28, 2017. Photo courtesy of Robert A. Boyd. 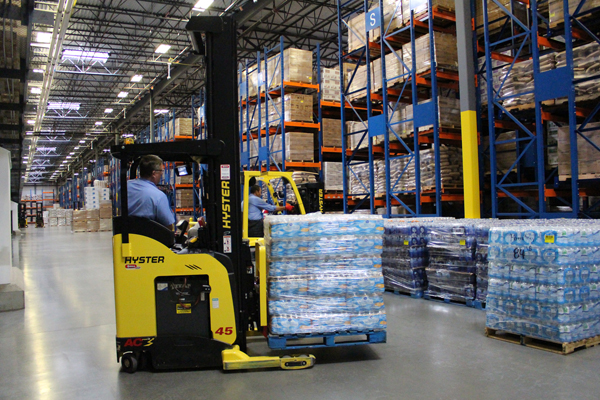 On Friday, August 25, 2017, workers at the Bishops’ Central Storehouse of the Church load pallets of water and other supplies on several trucks in Salt Lake City to be sent to Houston following rising floodwaters caused by Hurricane Harvey.