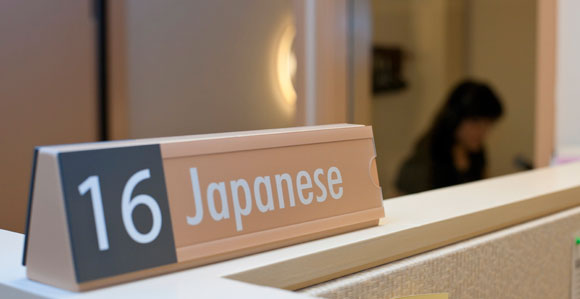 Twice a year, 58 language teams assemble in the Conference Center to bring live interpretation of prophets' messages to Church members around the world. Other interpreters and translators throughout the world provide language services remotely.

“The Lord loves his children regardless of the language they speak or where they are located. Our responsibility is to utilize the gifts of the Spirit in relaying the message of living prophets to the entire world.”—Brad Lindsay, manager of interpretation services

It was October 1961, and presidents of newly formed stakes outside North America had come to Salt Lake City to attend general conference. For the first time, interpretation services were provided—in Dutch, German, Samoan, and Spanish—so that those priesthood leaders could hear the messages of prophets, seers, and revelators in their own language.

Today, 50 years later, those 4 language offerings have grown to 93. (The latest addition is Georgian, which will be introduced during the October 2011 general conference.) Their reach is far beyond the Tabernacle, the Conference Center, or even Salt Lake City. Thanks to technological advances and a number of dedicated Church employees and volunteers in many locations, the prophetic word is reaching an increasing number of nations, kindreds, tongues, and people (see Mosiah 3:20; D&C 133:37). In fact, at least one session of general conference is available for more than 98 percent of Church members in their native language.

Interpreters: An Offering of Sacrifice

“There’s a lot of preparation work, from reviewing what we’ve done in the past, to learning from issues that may have come up, to responding to requests from areas asking for new languages they’d like made available at the next general conference,” Brother Lindsay said. “We also do a lot of training of new interpreters and spend time finding people to replace interpreters who have moved on to other assignments.”

While a few general conference interpreters are Church employees in various parts of the world, an overwhelming number—some 800 people—are volunteers.

Sylvia Contesse of Switzerland now works for the Church doing professional translation, but she began as a volunteer in a time when interpreters had little time to prepare before conference began. “We received the text of the talks in English at the last minute,” she recalled. “It was a huge responsibility.”

But, she said, “It was and is a privilege,” she said. And even though interpretation work—whether consecutive (where the speaker says something, stops, and lets the interpreter restate the phrase in another language) or simultaneous (where the speaker and interpreter talk at the same time)—is demanding work, it is also, Sister Contesse said, a gift. “It makes you feel very humble. Of course, when you use that gift for the Church, I think the Spirit helps you more than usual!”

The sacrifice of these volunteers—either people who are native speakers of a particular language or returned missionaries who learned the language on their missions—is tremendous, said Jeff Bateson, director of the Translation Division. In addition to sharing their skills and donating their time on conference weekend, they also commit to training sessions. And for many of them, general conference is just one of many events when they offer their services.

With the exception of nine languages, for which a recording is sent post-conference for members who speak that language to watch after the fact, conference is always transmitted live. That doesn’t mean, of course, that everyone watches it live. The Sunday afternoon session of conference, which begins at 2:00 p.m. mountain daylight time, airs live at midnight on Monday in Moscow, Russia. Local priesthood leaders may designate the following weekend or another time that is more convenient for most members to watch conference proceedings.

Interpreters, on the other hand, do participate live. All over the world, those offering their services do so in real time, as general conference is unfolding, even if it’s at an unusual hour in their area.

“Because we do everything live, we may have onsite interpreters working at 4:00 a.m.,” Brother Bateson said. “They come and spend the whole day at the area office or a local meetinghouse, since there are only two hours between sessions and that may not always be enough time to go home. There’s a great degree of sacrifice involved in what they do.”

Language Transmission: The Gift of Technology

Approximately 500 of the volunteer interpreters work from the Conference Center in Salt Lake City. Language teams of various sizes share 58 booths—state-of-the-art, soundproof workspaces in which the interpreters watch a video feed of general conference, wear headsets, and speak their interpretation into a microphone, which is then mixed with video and transmitted via satellite, Internet, and other technologies around the world. Because there are more languages than there are booths, some languages may receive only some sessions of general conference.

Even though the situation isn’t ideal, Brother Bateson said that Alma 29:8 has provided assurance to the translation team: “For behold, the Lord doth grant unto all nations, of their own nation and tongue, to teach his word, yea, in wisdom, all that he seeth fit that they should have; therefore we see that the Lord doth counsel in wisdom, according to that which is just and true.”

“That term—‘all that he seeth fit that they should have’—indicates that not everybody gets everything,” Brother Bateson said. “But they get what they need in their own tongue, and we see that in our work. Not everyone gets what comes out in English or in Spanish or in Portuguese, but He sees to it that people have what they need.”

In approximately a dozen cases, usually in areas where there might be a small pocket of Latter-day Saints, an interpreter will work in a meetinghouse and interpret for the congregation assembled at that same location.

In other cases, though, using a commercial technology called Tieline, remote volunteers’ interpretation is sent back to Salt Lake and then from Salt Lake, through a variety of technologies, it is distributed worldwide. For instance, the words of an interpreter working in Italy will be transmitted vie Tieline back to Salt Lake. In Salt Lake, that audio will be mixed with live video, and then the combined audio and video will go from Salt Lake via satellite back to Italy and to any other Italian-speaking listeners around the world. All of this is done almost instantly; the few-seconds delay that does occur is compensated for by delaying the video feed the same amount of time.

Brother Bateson, who began working for Translation in 1991, recalls that 20 years ago conference was interpreted in approximately 30 languages. At that time interpretation was often transmitted by phone lines.

Following general conference, the transcript of the interpreted text is used as the basis for the translated written text, which is published on ChurchofJesusChrist.org two to eight weeks after conference. (Audio and video files are available within 24 hours for many languages.) The Church magazines also publish the translated text in the May and November issues of theLiahona. (The conference editions of the Church magazines are available in 33 languages, with approximately 30 more languages being published in a simply formatted text document containing conference messages. Together, these publications reach nearly 95 percent of Church membership.)

“The world is much smaller because of technology and what we can do to link to various places,” Brother Lindsay added. “It’s because the Lord has blessed us with technology that we’ve been able to expand the number of languages available.

The Holy Ghost: A Crucial Contributor

Even with the most highly trained volunteers and the best technology available, the work of interpretation is one in which those involved rely heavily on the Spirit, Brother Lindsay said.

“It’s one thing to listen, feel the Spirit, absorb a speaker’s message, and try to figure out what it means for you personally,” he said. “But to turn around and put that message into a different language and try to convey what the speaker wants to convey—that’s a monumental task.”

Parts of speech, metaphors, and references don’t always work across all languages, Brother Lindsay points out, so interpreters must find a way to convey what the speaker is intending to communicate—and they must do it in a precise, quick, and meaningful way so that the “message still comes to the hearts of the listener.”

That task requires that interpreters rely on the gifts of the Spirit, he said.

“The Lord loves his children regardless of the language they speak or where they are located,” he said. “Our responsibility is to utilize the gifts of the Spirit in relaying the message of living prophets to the entire world. That involves a oneness with the speaker and with the Spirit, or the message won’t be conveyed properly. And where we may fall short in interpretation, we have the assurance that the Spirit will fill in and bridge the gap.”

Because having the Spirit is so crucial in the work of interpretation, the Translation Division puts as much emphasis on spiritual training as it does on technical training in preparing interpreters for general conference, said Brother Bateson. The result of such preparation is always evident.

“We have had instances of interpreters coming out of the booth with tears rolling down their cheeks because they have felt the Spirit and know that the Spirit has worked through them to help convey the message of a prophet of God,” Brother Bateson said. “We work many, many hours during general conference weekend, and that’s the rewarding part of it.”

David Selck is a student at Brigham Young University who began volunteering as an interpreter shortly after he returned from his mission to Romania in 2008. He is grateful to be able to volunteer because it provides an opportunity to help the people he grew to love on his mission. It also, he said, provides him with a different way to experience conference.

“You’re not just hearing the talk. In a way, you’re also giving it,” Brother Selck said. “None of the words are yours, of course, but you are trying to convey the emotion and the meaning the speaker intended, not just understand the syntactical definition of what is said. The Spirit is definitely involved with that.”

Doctrine and Covenants 90:11 is one of the scriptures whereby the interpretation section takes counsel and comfort, Brother Lindsay said. “For it shall come to pass in that day, that every man shall hear the fulness of the gospel in his own tongue, and in his own language, through those who are ordained unto this power, by the administration of the Comforter, shed forth upon them for the revelation of Jesus Christ.”

“We take that very literally,” Brother Lindsay said. “People are hearing it in many different ways—through interpreted word, translated word, or signed word—but it’s latter-day prophecy happening now. Interpretation isn’t a new thing, but we’re in a period of time where it’s exploding.

“I know that the Lord wants us to get the word out to all of His children,” he continued. “When I meet people in remote locations who are new to the gospel and are learning gospel principles sometimes for the first time, I find that they want it, they’re hungry for it, they desire it. What we do here, to help them answer that desire and help them hear what prophets are saying in these, the latter days, is a wonderful blessing. This is the Lord’s work. He’s in the details. He loves His children and wants them to know what He is saying.”