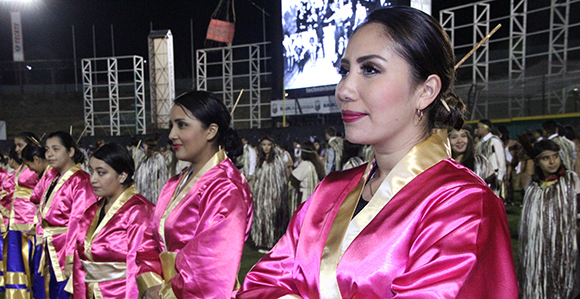 Tijuana-area youth commemorate, through musical performance, the opening of the Tijuana Mexico Temple December 12 at a cultural event on the field of a professional baseball stadium.

The theme of the December 12 Tijuana youth cultural event, “Venid a Mi,” transcended the evening's dances, songs, and celebration. In English, it means “Come unto Me”—a divine invitation to the people of northwest Mexico and beyond.

Held in a stadium that houses Tijuana's pro baseball team, the cultural event featured a cast of hundreds of area youth. The night offered the young men and young women a once-in-a-lifetime opportunity to commemorate, through musical performance, the opening of the Tijuana Mexico Temple.

The temple is to be dedicated Sunday, December 13, in three sessions.

In his remarks, President Uchtdorf, the Second Counselor in the First Presidency, spoke of his excitement to be at the cultural event with Elder Dallin H. Oaks of the Quorum of the Twelve Apostles. “Our wives and all those who came from Salt Lake City are so happy that we are with you and can feel your spirit and joy.”

The Church leader also spoke of President Thomas S. Monson's love for the people of Tijuana and Mexico.

“[President Monson] speaks a little Spanish, so he would address you in Spanish. But I have a wonderful translator. Remember, translators are like the Holy Ghost. If you listen correctly you will hear the message. So listen always to the Holy Ghost.”

Be a “true Latter-day Saint” and a light for all, he taught.

Yes, the cultural event allowed scores of young people to showcase their musical talents. But more importantly, it offered them an opportunity to celebrate the opening of the new temple together. The night was defined by unity, enthusiasm, and fun.

The program highlighted the Tijuana area's rich history and gospel legacy and devotion. The loudest cheers were prompted by a model of the new temple that was built, in real time, by the young performers.

At the end of the evening, President Uchtdorf saluted the youth, adding that the opening of the Tijuana Mexico Temple would forever remain a sacred day in their lives. 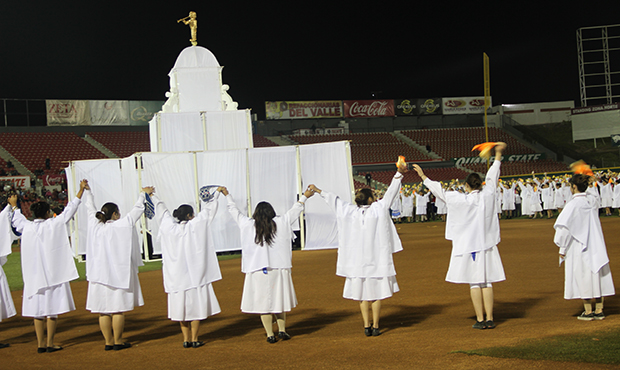 During the finale of the December 12 cultural event, young people reenact the building of the Tijuana Mexico Temple. Photo by Jason Swensen.