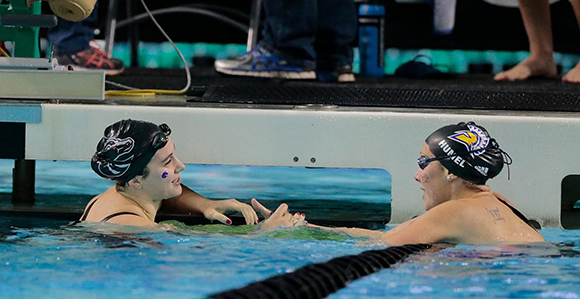 “I’ve loved being on a team where I’m the only member because I know people will ask me questions.” — Charlotte Hume, University of Wyoming soccer player

Collegiate athletes Abbey Sorensen, Charlotte Hume, and Avery Stowell have never played against one another. They never will.

Each plays a different sport for different universities. They don’t even compete in the same element: Abbey (Boise State swimming) is in the water, Charlotte (Wyoming soccer) is on the grass, and Avery (Navy volleyball) plays on a hardwood floor.

But each athlete shares something in common that’s perhaps not evident at first glance:

Abbey, Charlotte, and Avery are all active Latter-day Saints competing on teams where their religious affiliation makes them minorities.

They simultaneously represent their respective schools and their shared faith.

The young women’s experiences are not really unique. Any member who has lived or worked or studied someplace where being a Latter-day Saint is a curiosity will likely recognize their challenges—and their frequent opportunities.

And rather than feeling isolated, each athlete is accepting President Gordon B. Hinckley’s invitation to be “kingdom builders”: “I invite every one of you, wherever you may be as members of this church, to stand on your feet and with a song in your heart move forward, living the gospel, loving the Lord, and building the kingdom. Together we shall stay the course and keep the faith, the Almighty being our strength” (“Stay the Course—Keep the Faith,” Ensign, Nov. 1995, 72).

Size up Abbey Sorensen’s personal, religious, and athletic profile and you have a fairly typical Brigham Young University athlete.

The lifelong member grew up in the Salt Lake Valley and claimed three Utah state swimming titles at Riverton High School. She was planning on being a Cougar. Her recruiting visit to Boise State seemed a mere afterthought.

“But on the flight home from Boise I started crying because I realized that was where I wanted to go; it was where I needed to be even though I had always thought I would stay in Utah,” she said.

She quickly learned Boise was a bit different from her hometown. There are plenty of Latter-day Saints in the capital city, but Abbey was a religious minority on campus and on the swim team.

One of her freshman roommates had never met a Latter-day Saint. Others on campus had faulty understandings of the Church.

“It was a big adjustment—but in the best way,” she said. “I realized I couldn’t lean on everyone else and I couldn’t expect everyone to believe the same way I did. I had to stand up for my beliefs when they were challenged and explain myself in ways that I hadn’t done before.”

Abbey added it was invigorating learning from teammates and classmates. “It expanded my testimony of the gospel and my perspectives on the rest of the world.”

She also discovered missionary moments. She remembers sharing her testimony with another freshman roommate, Laura Williams, and inviting her to join her at the young single adult ward.

“Then one Sunday I went to church and there was Laura with one of my friends from the track team.”

Laura began learning more about the gospel and was eventually baptized. “Being able to help her was a big testimony building experience for me. I realized I had a testimony of my own.”

She’s also enjoyed success in the pool. After earning honorable mention All-America honors in 2017, Abbey was the 2019 Mountain West Conference Swimmer of the Year. She claimed conference titles in both the 50-meter freestyle and the 200-meter backstroke, as well as being part of eight relay championship teams.

She’s quick to credit her coaches, teammates, and advisors for supporting her academic goals. Most Division 1 college athletes wouldn’t consider studying nursing because of its demanding classroom and clinic schedules. But the Bronco swimming staff allowed Abbey to often train on her own so she could participate in the school’s nursing program.

She points to her two grandmothers for placing her on the path to becoming an oncology nurse and, eventually, a nurse practitioner. She remembers watching her maternal grandmother, Pat Jacobsen, gently tend to others as a nurse. She also witnessed the compassionate care her paternal grandmother, Genele Sorensen, received from many nurses during her battle with cancer.

“Being able to care for people and to have the light of Christ shine through me by caring for them is something that’s important to me. Being a nurse will allow me to do that.”

Here’s a time-tested remedy for little girls “afflicted” with massive levels of energy: Find her a soccer ball and a pair of cleats—and then let her run, run, run.

It worked for Charlotte Hume. The daughter of gymnasts, the Colorado girl found a natural fit in what is sometimes called “the beautiful game.”

“I was really aggressive, so my parents knew it was the right sport for me,” she said, laughing.

She grew up a BYU soccer fan and attended several camps in Provo, finding mentors in several Cougar players. Despite growing up just a few hours away from Laramie, she never gave much thought to playing for the University of Wyoming.

But the Wyoming Cowgirls coaches liked her talent and tenacity and offered her a scholarship. After getting to know the Wyoming staff and players, “I just took a leap of faith and I ended up loving it.”

For the first two years in a Cowgirl uniform, she was the only member of the Church on the squad. (Fellow Coloradoan and Latter-day Saint Savannah Warner was added to last season’s roster.)

There were occasional challenges—but Charlotte is accustomed to being on teams where her Church affiliation made her an anomaly.

Several of the Cowgirls players are from Australia—and Charlotte was the first Latter-day Saint they had known. She often invites teammates to church, “and sometimes they come.”

From the beginning of her college career she’s felt “supported and respected” by the Wyoming program.

Still, she battled a bout of nerves when she broke the news to her coach, Pete Cuadrado, that she had decided to serve a mission. She worried her scholarship and her spot on the team were in peril.

“But he was totally supportive and excited for me,” she said.

Laboring in the Ecuador Guayaquil North Mission “was the best experience of my life—I wouldn’t trade it for the world.” Learning a new language was rough in the beginning. She would sit in discussions and understand few words. But after much prayer, fasting, and study, the once-daunting Spanish language—with all its rolling Rs—became part of her lexicon.

Her charge to share the gospel reached from South America to the Cowboy State. She included her Wyoming teammates and coaches in her weekly email home, telling them about her experiences of sharing the gospel with the Ecuadorian people.

The returned missionary now looks forward to her final year of college soccer. She recently finished her undergraduate degree in kinesiology. And with three YSA wards in Laramie, Charlotte has made plenty of Latter-day Saint friends on campus.

Her advice for young adults who find themselves living in areas with few Latter-day Saints?

“You can’t stop reading your scriptures every day, saying your prayers every day, and going to church. Try to increase your faith in Christ, and never be afraid to stand out. Look for ways to serve and share the gospel through your actions.”

Plebe year at the United States Naval Academy is tough because, well, it’s supposed to be.

Freshmen at the service academy in Annapolis, Maryland, endure a grueling academic load (calculus, chemistry, cyber security) all while adjusting to military life and its many rules and regulations.

As a Division 1 athlete, Midshipman Avery Stowell also dedicates several hours each day to training and competing. And during the season, she’s playing catch-up on classwork she missed traveling to away games.

But each day she chooses to live gospel principles.

She was challenged to make that daily decision by Navy football coach Ken Niumatalolo, who also presides over the Annapolis Maryland Stake.

“I met with Coach Niumatalolo before committing to Navy,” she said. “He simply told me that I would make a choice every day to either live the gospel—or fall away from the gospel.”

Yes, being an Academy student-athlete is a time grind. But like any Latter-day Saint student, Avery makes a choice to read her scriptures and to attend church, institute, and weekly family home evening gatherings as often as possible.

A lifelong member and a native of Yorba Linda, California, Avery initially had little interest in relocating to the Atlantic Coast and attending a service academy.

“I had always seen myself playing at BYU; that’s all I had ever known,” she said.

But after visiting the storied school, she was hooked on the culture and camaraderie defining the Brigade of Midshipman.

“I knew I wanted to be there,” she said.

She was welcomed into an “instant family” on the volleyball squad, where she is the only Church member.

“The team is so open and accepting and you can go to any other player with concerns,” she said. “We know we are there for each other.”

Such openness means Avery’s often answering questions from teammates and fellow Mids about her religious convictions. Many ask if she is a Christian. She realizes she’s an example. Others are always watching.

“I’ve had opportunities that I would not have had at any other school.”

Avery’s maiden season on the Navy volleyball team was replete with memories. The Mids claimed the Patriot League title for the first time in almost two decades before making their initial appearance in the NCAA Tournament.

She’s also grateful for her fellow Latter-day Saint midshipman and Church military missionaries that are always looking out for her. 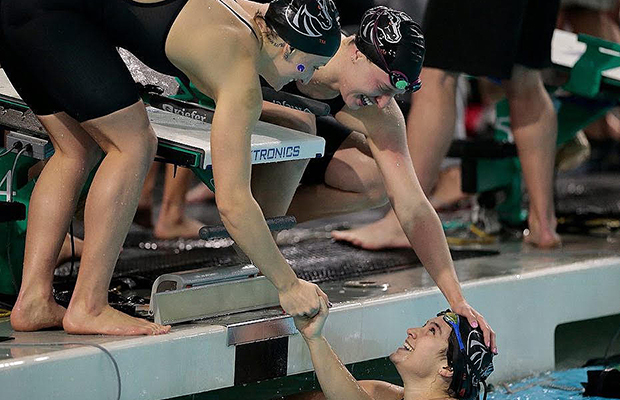