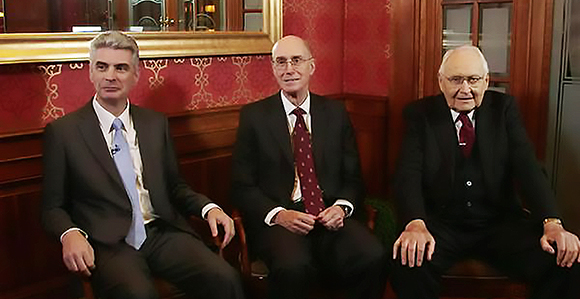 A trio of Latter-day Saint leaders traveled to Vatican City—headquarters of the Catholic Church—to participate in a historic, three-day interfaith gathering November 17–19 to reaffirm the centrality of marriage and families in society.

The collection of religious leaders attending “Humanum: An International Interreligious Colloquium on the Complementarity of Man and Woman” was vast and varied. The event included representatives from 14 religious traditions and 23 countries. But the message culminating in their many discussions was, at once, unified and universal: The world needs stronger families.

President Henry B. Eyring, First Counselor in the First Presidency, assumed a prominent role at Humanum—delivering a 20-minute speech November 18 on the sanctity and essential value of marriage between a man and a woman. (See a summary of his talk.)

He was joined in Vatican City by Elder L. Tom Perry of the Quorum of the Twelve Apostles and Bishop Gérald Caussé, First Counselor in the Church’s Presiding Bishopric.

Pope Francis opened the Vatican conference November 17 by sounding a sobering alarm about instability threatening families across the globe:

“Evidence is mounting that the decline of the marriage culture is associated with increased poverty and a host of other social ills, disproportionately affecting women, children, and the elderly. It is always they who suffer the most in this crisis.”

The conference allowed President Eyring, Elder Perry, and Bishop Caussé an invaluable opportunity to represent the Church, make new friends across religious borders, and, most important, stand as witnesses of the eternal significance of marriage and families.

At the conference’s conclusion, Deseret News editor Paul Edwards sat down in Vatican City with the three LDS leaders to glean their thoughts on the colloquium.

The Latter-day Saint presence at the conference is no coincidence. President Eyring noted that veteran leaders such as Elder Perry had laid the groundwork, making friends over the years with many from the global religious community. But the Church’s involvement here also represented a key beginning.

A spirit of friendship defined the historical colloquium, observed Bishop Caussé. “We share a common belief in values in favor of families.”

Relationships between The Church of Jesus Christ of Latter-day Saints and other religions were also fortified.

“More cardinals and more representatives of other churches were coming up to me and shaking hands as if I knew them,” said President Eying. “And I think it grew over the conference.”

Elder Perry spoke of the Catholic Church’s long-established doctrine regarding marriage. Catholic leadership has come to recognize the strength behind the LDS Church’s commitment to marriage and family.

A belief that “the root of good societies are good families” helped unify the colloquium, added President Eyring.

Power was found in the combined voices of different religions coming together to champion marriage and families.

“We’re united together on this one fundamental doctrine that’s so essential in our Father in Heaven’s kingdom,” said Elder Perry. “The basic foundation of everything is the family, and I think that by having us together, it brought strength to all.”

So what’s to be gained from the colloquium? What’s next?

“We must start with our own people,” said Elder Perry, “and start teaching it, the fundamental doctrine of family. We have to teach the value of father and mother as the major teachers of the family unit.”

“We could do more,” he said. “There could be more in families where they really come together to share their testimonies and love.”

Elder Perry also identified a connection between the retreat from marriage and society’s concerns about religious liberty.

“We have to have a religious liberty in order to have the power to declare the doctrines that the Lord has given to us,” he said. “Not only in the pulpits, but to other avenues that we can influence people in the value that this is, that we must have religious freedom in order that the churches can be this conscience that America needs, that the world needs.”

Video clips from Paul Edwards’s interview with the Brethren can be viewed at deseretnews.com.