Three Brothers Serve God and Country in the Navy

Wilson and Fletcher Rydalch have both attended the United States Naval Academy, as has their brother, Andrew.

“To live for the Savior Jesus Christ and then to live for the future of this land is such a beautiful combination.” —Sister Nancy Richardson, senior missionary at the naval academy

Lynne Rydalch remembers that when one of her sons was 8, he told her that he would go to college somewhere far away. Sister Rydalch raised her nine children in Rexburg, Idaho, so she thought he might mean California. In fact, she has now sent three sons to the highly competitive United States Naval Academy in Annapolis, Maryland. They are Andrew, Fletcher, and Wilson Rydalch.

The Rydalch brothers are empowered by a determination and commitment to character that is typical of those who undertake to serve both God and country, said Sister Nancy Richardson, a senior missionary who is assigned to support the 38 LDS soldiers at the naval academy.

“It’s a free education, and it’s a phenomenal education, but it is so hard,” said Sister Richardson. “They are some of the most brilliant youth in our country with the highest character.”

The physical, mental, and moral stresses on LDS midshipmen make Church activity both a challenge and a blessing. Sister Richardson and her husband, Elder Frederick Richardson, host family home evenings, Sunday dinners, and institute classes and greet the freshmen, or “plebes,” during their first week of intensive summer training to invite them to church.

“They will still go to church all summer long because [the academy] is so hard on them,” Sister Richardson said. “They want a break.”

Wilson Rydalch, the third brother to enter the Annapolis academy, said that sacrament meeting during “plebe summer” is short because of the strict schedule, but especially powerful. The LDS midshipmen can support each other at church, and the new freshmen especially benefit from the camaraderie.

“Sacrament meeting is probably what you look forward to the most during all plebe summer,” Wilson Rydalch said.

Andrew Rydalch, who graduated 27th in a class of 1,000 this year, explained that because most of his peers were not religious, falling away from the Church would have been easy. 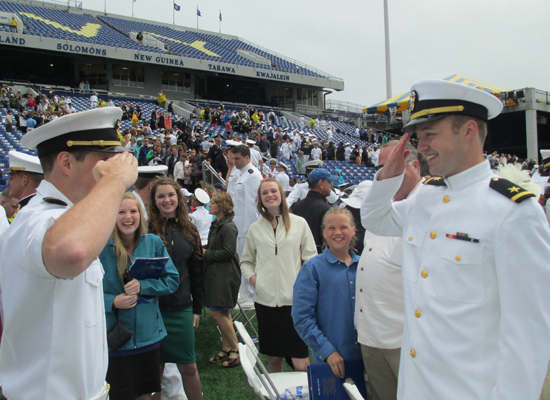 Many of these midshipmen (a term for naval academy students of both genders) serve the Lord as well as their country. Five midshipmen are preparing to serve missions: Nathan Fewel will serve in Salta, Argentina; Wilson Rydalch in Mendoza, Argentina; William Allred and Joshua Farr in Tokyo, Japan; and Moises Diaz in Paris, France.

Wilson Rydalch went through the process of resigning from the Navy so he can leave for a mission to Argentina later this month. The midshipmen can only leave the military academy after the second year, and they reapply to the academy in the final months of their missions. 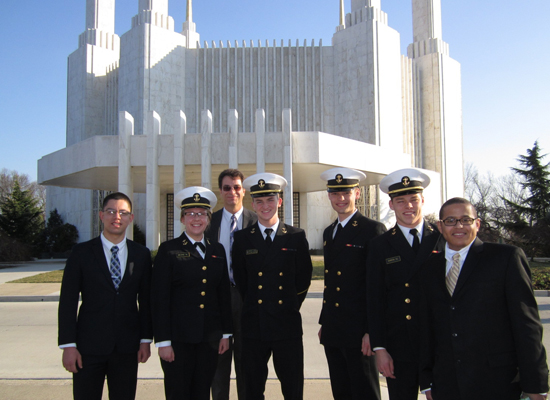 Mission experiences occur even before these midshipmen trade a military uniform for a missionary nametag. Curious classmates, many of whom had never met a Mormon before, asked Wilson Rydalch why he was going to Argentina, and he took the opportunity to bear his testimony of revelation and a living prophet.

The Rydalches’ parents have been impressed with how the rigors of military service have prepared their sons for missions.

“When Andrew went to the MTC, it was like being on vacation,” said Jeffery Rydalch, their father. “While everyone else is stressing they’re saying, ‘I can do this for another year.’ Nobody’s yelling at them.”

Elder Fletcher Rydalch added that in the naval academy “you just get used to doing hard things.”

Brother Rydalch also remarked that the naval academy rules are similar to LDS standards, “except their guards have guns.”

“The best way to find support is to try and be a support for other people,” Elder Rydalch explained. “And then you’ll find it for yourself.”

Along with the other LDS midshipmen, the Rydalches are moving forward with scholarships, higher study, and both religious and military missions the world over.

Sister Richardson has been thrilled to help prepare the midshipmen for their service to Church and country. “To live for the Savior Jesus Christ and then to live for the future of this land is such a beautiful combination,” she said.