The Piano Guys answer questions from youth worldwide and perform during a Face to Face event sponsored by the Church atop the Conference Center in Salt Lake City on October 20.

“Happiness is best found by following the teachings of Jesus Christ.” —Steven Sharp Nelson of the Piano Guys

LDS musicians the Piano Guys urged youth worldwide to put their faith first and rely on the Savior during a Church-sponsored Face to Face event broadcast on October 20.

“Advice we give to anyone who comes to us is number one: give your life to God,” pianist Jon Schmidt said.

Participants were able to submit questions to the Piano Guys using #LDSface2face. Thousands of questions were received on topics ranging from how the group maintains their standards in the music industry to how youth can use their talents to bless others. The event was mentioned 5,360 times on social media sites alone, and the #LDSface2face trended on Instagram and Facebook.

The musicians also advised youth who struggle with lack of faith or feelings of inadequacy to rely on the Savior. “Happiness is best found by following the teachings of Jesus Christ,” cellist Steven Sharp Nelson said.

The Piano Guys—which includes Brother Schmidt, Brother Nelson, Al van der Beek, and Paul Anderson—also performed several musical numbers, including a medley of the hymns “Come Thou Fount of Every Blessing” and “I Need Thee Every Hour,” arranged especially for the event.

Face to Face with the Piano Guys was broadcast in front of a live audience of 70 LDS youth, with nearly 240,000 youth from 96 countries watching the live stream on ChurchofJesusChrist.org and other digital channels.

When asked how they keep the Sabbath day holy while traveling the world on tour, the Piano Guys said they decided early on in their careers that they would always go to church. Brother Anderson said that just last week the group was in Scotland for a video shoot, and with so much to do and several setbacks in the production process, he was tempted not to attend Church meetings. However, the decision they reached together years ago made skipping Church services out of the question. “We got together, and we said, ‘We go to church. We’ll have faith and things will work out,’” Brother Anderson said.

Everything did indeed work out. The musicians met other Church members at the meetinghouse who helped them find the backup musicians they were searching for and a location to film the video.

Mellyn Bingham, 13, from Manteca, California, watched the event with her ward for Mutual and said she was inspired by the group’s example of staying true to their faith. “I feel like they’re setting an example for others who want to do something but are kind of scared to because they’re Mormon,” she said.

Brother van der Beek told youth that when he returned from full-time missionary service, he fell out of Church activity. It was the Atonement of Jesus Christ that brought him back to the Church and renewed his faith. “I was kind of at a point in my life that I felt like I didn’t deserve blessings,” he said, “but there’s nothing in our lives that should keep us away from Christ’s light and the Atonement.”

He also said that good friends, like his fellow members of the Piano Guys, helped him become the person he wanted to be. He encouraged youth to look for friends who do the same for them. “Surround yourself with people that lift you up, that bring joy into your life, that hold you to the same standards, that don’t hold you down,” he said. 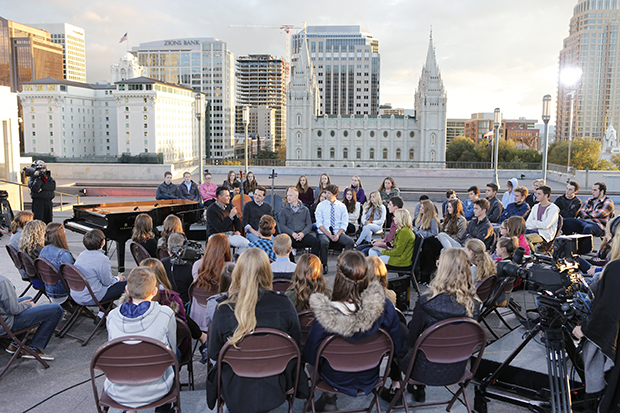 Youth from around the world had the opportunity to pose questions to members of the Piano Guys during a Face to Face event sponsored by the Church October 20.

Several times the musicians encouraged youth to develop and share their talents and not compare their personal gifts with the gifts of others. “Every single person in the world has a gift that they can develop and that they can use to help someone else,” Brother Anderson said.

“Remember, differences are meant to be celebrated, not calculated,” Brother Nelson added. 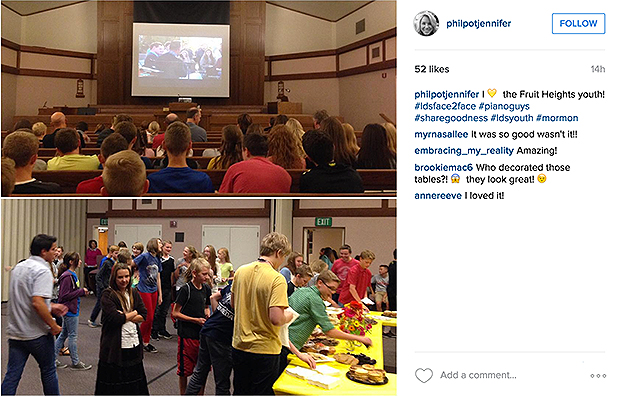 Alison Waterman, a high school senior watching the broadcast from Folsom, California, said this counsel strengthened her belief that each person can have an impact in the lives of others. “It strengthened my testimony that all of our spiritual gifts have a capacity to make a difference in the eyes of God, even if they seem insignificant to us,” she said.

The artists also offered advice to youth struggling with low self-esteem and feelings of worthlessness. “To someone who is feeling worthless, let me tell you that those thoughts are not from God,” Brother Schmidt said.

Brother Anderson told youth that he “struggled huge” with self-esteem and depression in high school. “The best thing I found was to be able to serve someone else and be able to take care of them,” he said.

Brother Nelson said the power of service goes unappreciated in our self-centered world. “The best antidote I’ve found for self-esteem issues is service,” he said. “The minute you start serving somebody is the minute you start loving that other person and yourself.” 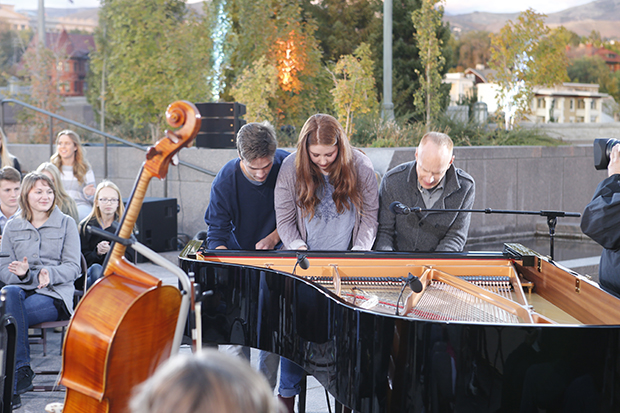 Two youth from the live audience join Jon Schmidt for a musical improvisation at the piano during the Face to Face with the Piano Guys on October 20.

Brother Nelson also challenged youth to pray and read their scriptures. “If you aren’t reading your scriptures, just get to it,” he said. “You will see a profound difference and increase in the Spirit of God in your life.”

After viewing the broadcast with the young women in her ward in Little Elm, Texas, Young Women president Claire Woodward said, “We felt the Spirit while we watched and listened to the Piano Guys on Face to Face. They strengthened us with their testimonies and inspired us to keep the Savior the foundation of everything we do.” 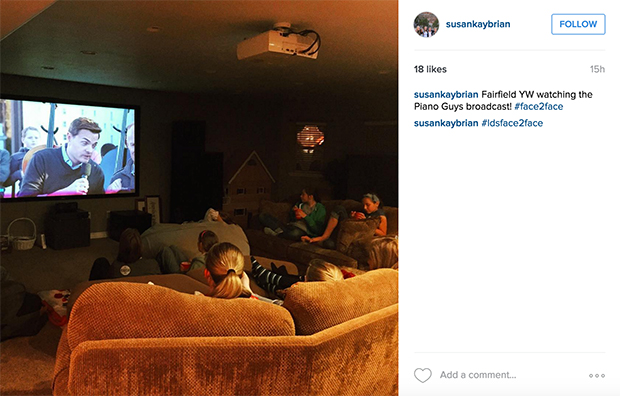 Schmidt shared a quote from President Ezra Taft Benson that he said helps remind each member of the Piano Guys to keep his life in balance no matter the amount of success the group has:

“Men and women who turn their lives over to God will discover that He can make a lot more out of their lives than they can. He will deepen their joys, expand their vision, quicken their minds, strengthen their muscles, lift their spirits, multiply their blessings, increase their opportunities, comfort their souls, raise up friends, and pour out peace,” (“Jesus Christ–Gifts and Expectations,” Ensign, Dec. 1988). 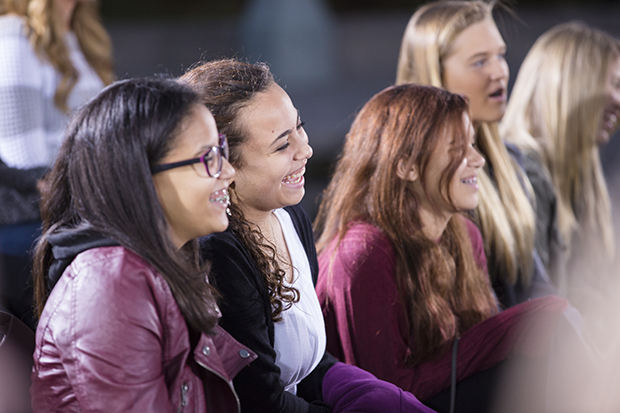 Young women from the live audience laugh during the Face to Face event on October 20 that featured the Piano Guys.

What does that mean for the Piano Guys? “We put God first and our families first,” Brother Anderson said.

The Utah-based LDS artists have toured worldwide, released four albums, and produced numerous YouTube videos that have been viewed more than 700 million times. Although the evening centered on their LDS faith, the Piano Guys invited all of their 109,000 Twitter followers to participate.

Face to Face with the Piano Guys was the fourth in a series of Face to Face events for LDS youth sponsored by the Church. Previous guests include Elder David A. Bednar of the Quorum of the Twelve Apostles and his wife, Susan Bednar, violinist and entertainer Lindsey Stirling, and singer David Archuleta.

If you missed the broadcast, watch it now on facetoface.ChurchofJesusChrist.org. 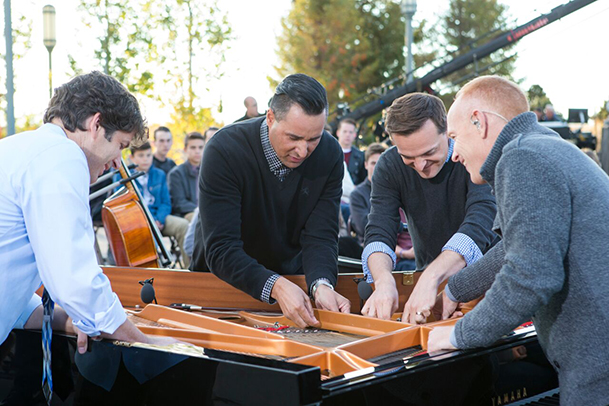 The Piano Guys perform during a Face to Face event for LDS youth October 20. 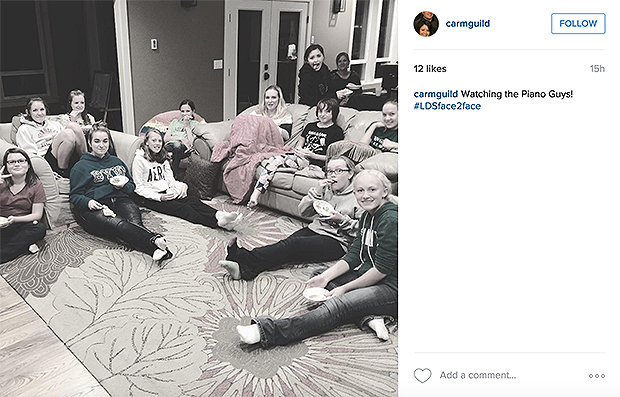 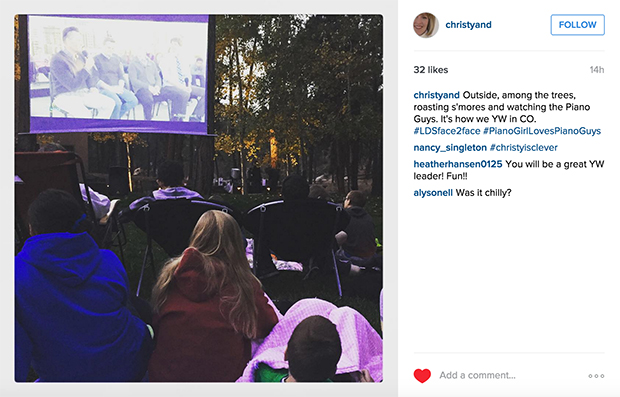