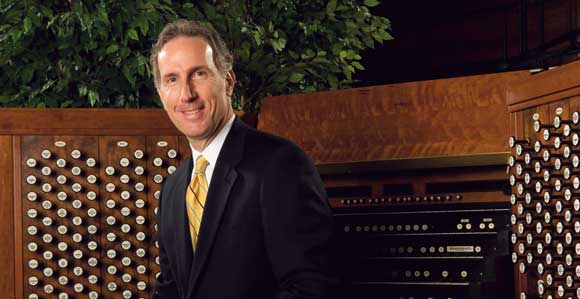 Richard L. Elliott, Principal Organist for the Mormon Tabernacle Choir, draws parallels between the music he creates at the organ and the life he’s creating with music.

“In music, it’s not so bad if you stumble—it’s just a bad note. But it’s a wonderful thing that when we stumble in life, we have the Lord to help us repent and do better.” —Richard L. Elliott, Mormon Tabernacle Choir organist

When Richard L. Elliott seats himself at the polished cherrywood of the Conference Center organ in Salt Lake City, Utah, USA, the 7,667 wind-powered pipes translate the music of his soul into something others can enjoy.

Sometimes the music emanates in rich waves, as when he accompanies the world-famous Mormon Tabernacle Choir singing the well-loved hymn “This Is My Father’s World.”

At other times the music crashes through, like it does during his ground-vibrating, finger-snapping arrangement of “Go, Tell It on the Mountain,” an African-American spiritual that requires the agile foot pedal technique for which he has gained some fame.

But whether he’s playing the organ, dealing with life’s curves, learning, or simply living, Brother Elliott knows that continual work and preparation are key components to one's time here on earth.

“There are a lot of parallels between playing the organ and what we go through in life,” Brother Elliott said. “Probably the most important one is that [life] takes constant effort and preparation. It’s not enough to cram. . . . It’s better to work consistently over a long period of time.”

Effort and Preparation in Music

The ease with which Brother Elliott handles everything from an electric piano to the Conference Center’s five-manual organ comes from more than 40 years of practice and musical education.

He fell in love with music as a child, listening to his mother play the piano. The church he attended growing up on the East Coast of the United States introduced him to gospel music, which still influences his jazzed-up and oft-improvised musical arrangements.

As a teenager he played the organ—complete with flaming speakers, smoke machines, and flash pots—for a rock band. During one concert at a junior high school the fire department showed up, and the local parks and recreation management was asked to blacklist the group. 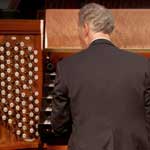 “I think every musician that serves with the Mormon Tabernacle Choir has to find what his or her unique voice is,” Brother Elliott said. “My background was in a variety of music styles. . . . When I came here I had to think about what I was bringing that was unique but would benefit the Choir and the Church, so I’ve tried to play to those things.”

Brother Elliott came to the choir in 1991, after earning a bachelor of music degree at the Curtis Institute of Music in Philadelphia, Pennsylvania, USA. Richard Elliott received his bachelor of music degree from the Curtis Institute of Music, and master's and doctoral degrees from the Eastman School of Music in Rochester, New York, USA.

Many agree that Brother Elliott’s “voice” as the Principal Organist for the Mormon Tabernacle Choir is authentic and easily recognizable from his 20 years as a Temple Square organist.

Each of the five choir organists is heavily involved in rehearsing with the choir, playing for the weekly Music and the Spoken Word broadcasts, and performing the daily organ recitals on Temple Square. The group includes full-time organists Brother Elliott, Clay Christiansen, and Andrew Unsworth, and part-time organists Bonnie Goodliffe and Linda Margetts.

“We always try to put in the time on the organ and do the all the things we were taught to do in our music lessons, but we also try to do the spiritual preparation as well,” Brother Elliott said. “We feel that our job here is to uplift and inspire, but . . . we also feel that our job is to testify through our music.”

The most rewarding feeling, he said, is the confirmation that what he’s playing is communicating the message it’s meant to.

“Every time I get out there in front of the choir and hear those voices, it’s hair-raising,” he said. “There are times still when I’m overcome by emotion—not just by the size of the sound or just how good they are, but by the spirit that they bring and the music that they sing, which really has the potential to change lives.”

Effort and Preparation in Adversity

A potentially life-changing event occurred in Brother Elliott’s own life in 2009, when the tendon of his left bicep ruptured. His options were to leave it be and regain mobility, but with lessened strength in that arm, or to undergo surgery, which involved the potential of nerve damage.

“It was pretty scary as a professional musician contemplating what might be ahead,” he said.

He turned it over to the Lord, with faith that whatever the outcome, he would accept it.

He chose to risk the surgery, and while recovering he found other productive ways to spend his time, especially practicing his technique on the organ's pedal keyboard.

That effort ended up being the genesis of the organ solos he has performed at the Tabernacle Choir’s Christmas concert over the past few years.

Though his experience with orchestral composition was limited, he also used that time to study orchestration and arrange a piece for the choir, at choir director Mack Wilberg’s request.

Since the surgery he has recovered full strength and use of his arm, without any long-term problems.

“My recovery was a ratification that my gift had come from Heavenly Father and that He wasn’t finished using me as an instrument in His hands,” Brother Elliott said. “But I also think that had things turned out otherwise, I would have found another way to serve and would have found comfort in that.”

Effort and Preparation in Conversion

When Brother Elliott was 18 years old, he was riding in the car with his mother one day when she pointed out the “DC Mormon Temple.” Little did he know then that he would be married for time and all eternity in that same temple 12 years later.

Shortly after his first glimpse of the temple, while pursuing his undergraduate degree in Philadelphia, he was introduced to the Church by several Mormon classmates.

The Book of Mormon made sense to him; he saw that it coincided with the Bible, which he had studied in his youth. A stake missionary gave him the missionary discussions and instructed him in recognizing the Spirit.

“Finally, I just had to get down on my knees and pray about whether the Church was true,” he said. “When I felt that feeling, I knew I had to make that move.”

Shortly Afterwards, in May 1980, he joined the Church.

Effort and Preparation in Life

In 1991, when Brother Elliott first became an organist for the choir, President Gordon B. Hinckley (1910–2008) charged him to be the very best organist he could be.

“I still feel like I haven’t done that,” Brother Elliott said. “I’ve made some strides, but I can see ways I haven’t done everything I can do, so I feel a sense of urgency now to work harder and spend more time doing the things that are most important.”

As he works to improve, he said he draws strength and instruction from the gospel.

“In music, it’s not so bad if you stumble—it’s just a bad note,” he said. “But it’s a wonderful thing that when we stumble in life, we have the Lord to help us repent and do better. He never opens the door too far. . . . It’s always just enough to see the next step. It’s worked well for me to take one step at a time and seek inspiration at each of those steps.”

While Brother Elliott may not be able to see more than a step ahead with certainty, he trusts that as he puts forth the necessary effort and preparation, the music he produces will continue to enrich his time here on earth, as well as that of all who hear it.