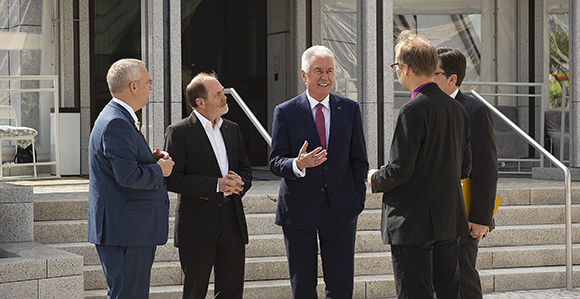 Elder Dieter F. Uchtdorf of the Quorum of the Twelve Apostles speaks with journalists outside the Frankfurt Germany Temple in Friedrichsdorf, Germany, on Tuesday, September 10, 2019. Photo by Flavio De Feo.

On a German late-summer’s day in 1987, Elder Russell M. Nelson, Elder Neal A. Maxwell, and Elder Joseph B. Wirthlin told the Frankfurt Germany Temple committee chair that they wanted to stretch their legs for a few minutes before the temple dedication.

“I thought, ‘What a wonderful opportunity for Guido to be with three Apostles,’” he recalled this week. “It was a wonderful moment.”

A photograph of that walk is an Uchtdorf family treasure. They plan to reenact it this weekend during the open house for the freshly renovated Frankfurt temple. “I want to walk with my son and his family up that same street,” Elder Uchtdorf said.

That walk and the new photograph they take will symbolize a full and fulfilling circle traveled by the Uchtdorfs and the Church in Germany in the 32 years since they hosted prophets, seers, and revelators in a city that fiercely resisted the temple at first. Much has changed in three decades. For one, Elder Uchtdorf himself is the Apostle walking the city’s streets at this open house, and he has been assigned to rededicate the temple on October 20. Meanwhile, leaders and residents of Friedrichsdorf—the municipality where the temple is located—say they love the temple just as the late President Gordon B. Hinckley had promised them they would.

Everywhere the Uchtdorfs turned this week, they found themselves discovering just how much has come full circle since the two years Elder Uchtdorf spent leading the temple committee.

As an 11-year-old boy, Dieter Uchtdorf escaped Communist Eastern Europe with his mother. They were refugees. A few years later, he considered leaving West Germany.

“As a teenager, it seemed like we went to the docks every week to wave goodbye as people immigrated to the United States,” he said.

“When my family joined the Church, our ward was filled to capacity,” Elder Uchtdorf’s wife, Sister Harriet Uchtdorf, recalled. “But people kept leaving.”

Counsel came from Theodore M. Burton, who presided over the West Germany and European missions and later was a Church General Authority.

“He made it a point that we should stay home and build the kingdom here,” Elder Uchtdorf said. “For me it was normal; you left for the United States. He said, ‘Stay. Stay here.’ That was a time we didn’t have a temple yet. He said, ‘Stay, and the temple will come.’”

President Burton ordained young Dieter an elder before he went into the air force and wrote him a personal letter of encouragement.

“Theodore M. Burton is for me, and for many others here, a key player for why we are here and why a temple is here,” Elder Uchtdorf said.

Another full circle was completed recently when President Burton’s grandson James Burton told Elder Uchtdorf the family had a first-edition copy of the Book of Mormon and said the family wanted to donate it to Frankfurt. On Tuesday, Elder Uchtdorf showed that Book of Mormon and three early German-language copies to Wolfgang Thielman, a journalist for Die Zeit, a national weekly German newspaper with a print circulation of more than 500,000. That came after Elder Uchtdorf gave Thielman a tour of the renovated temple.

James Burton will be at the temple’s rededication next month. Elder Uchtdorf has asked him to speak briefly.

Thielman interviewed Elder Uchtdorf at length, another parallel to 1987. During the original open house then, a national German television network asked the very busy temple committee chairman to do a live interview. It was a chaotic, tense time, with real concerns over the Church’s public image in Friedrichsdorf and Germany. Church members prayed and fasted for him, though he didn’t know it. (Watch the interview now.) 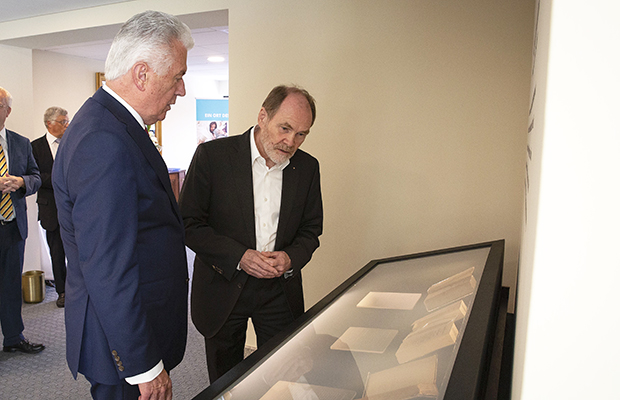 “I was sitting in front of my television praying the whole time,” Sister Uchtdorf said. “We knew some journalists might try to attack or embarrass him.”

The interview was scheduled to last two minutes, because the reporter expected breaking video of a crash to arrive at the station. It didn’t. The interview stretched nearly nine minutes. In the video, Elder Uchtdorf is young, stylish, and sure. It was a landmark moment for the Church, one that resonated with members and missionaries.

In 1984, Dieter Uchtdorf was a busy man. He had significant responsibilities with both Lufthansa and its union and then was made chief pilot. Then Elder Wirthlin interviewed him during the search for a new stake president. Elder Uchtdorf said he assumed he was “totally out of the picture” because he had too much to do.

Still, Elder Wirthlin extended the call to be the stake president. A year later, the Area President, Elder Carlos E. Asay, asked him to add more to his plate and chair the temple committee for the open house and dedication.

“I didn’t know what I was getting into,” he said. “I got into it and realized how much work it was. Fortunately, my work schedule was flexible and provided extra resources.”

“I knew which calls were Lufthansa calls and which were Church calls,” Sister Uchtdorf said.

Several times, they scrambled to complete tasks for what became a massive open house that drew 70,000 people. Lines stretched all over the block. The Uchtdorfs balanced their family life, his job, his stake presidency responsibilities, and the open house and dedication in a month that seemed like it wouldn’t end. 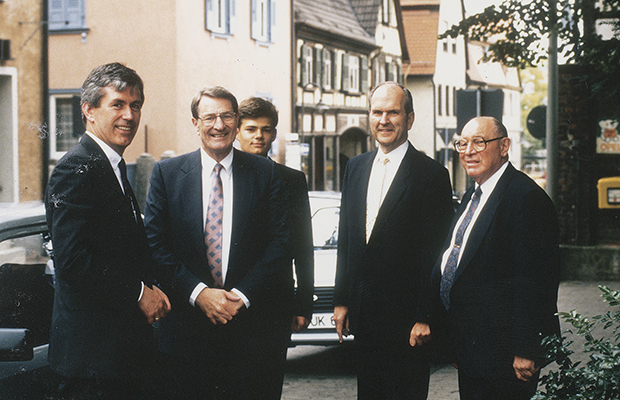 “In hindsight, Harriet and I asked ourselves, ‘Did this month have just 30 days?’ It felt like 45 days.”

It included special moments: The walk with his son and three Apostles. A successful open house. A temple dedicatory prayer by Church President Ezra Taft Benson.

“I was totally excited,” Elder Uchtdorf said. “Wow! We get a temple here in Frankfurt.”

“Every night of the open house, we had a meeting at the end of the day with the team,” he added. “There was marvelous excitement. Now some of those people are in wheelchairs. They still remember those days.”

Little did he know that he was in for a major shock from Friedrichsdorf’s new mayor a year later.

The old mayor lost his office after he and the city council approved the temple. The battle over the permit had been intense. Karl Günther Petry, 80, was on the Friedrichsdorf city council at the time. He still is and has been since 1968. Last week, the local attorney was honored for his 51 years of service as a councilman.

Karl Günther Petry, who has served on the Friedrichsdorf city council for 51 years, poses in front of the Frankfurt Germany Temple in Friedrichsdorf, Germany, on Tuesday, September 10, 2019. Photo by Flavio De Feo.

He said one political party wanted to build houses on the temple site, where a once-vital old noodle factory had stood. Petry thought that meant too much additional traffic in the center of this commuter town 12 miles north of Frankfurt.

“It was a difficult decision,” Petry said. “The Protestants began a war against the temple.”

The Lutheran church sent a priest who was an expert on religious sects to Friedrichsdorf to speak against the temple, Petry said. The priest spoke in public city council meetings. Controversy grew.

“That priest told us the Mormons are the devil,” Petry said.

He and his political allies decided to find out for themselves. They traveled to Bern, Switzerland, to see the temple there. They visited the local Protestant priest and Catholic priest and attended the Latter-day Saint ward.

“We asked, ‘Do you have any problems with the Mormons in town?’ They said, ‘No. We have no problems.’ We went to the ward. We were welcomed.

“We returned with the conviction that we would be right to allow the Mormons to build their temple here.”

Petry and others who made that decision still attend an annual Christmas celebration in the 1890s villa the Church agreed to keep on the property.

“I like it better than any other Christmas celebration in Germany,” Petry said. “I have no regrets about the temple at all. In fact, the new patron housing they’ve built along Taunusstrasse on the temple grounds is wonderful. The temple has been welcomed here for three decades. There are no critics now. I hoped it would go well once the temple was built, and that’s happened. We don’t have any challenges with the Mormons, and in fact, the many visitors who come here visit our businesses, eat in our restaurants.

“For Friedrichsdorf, it’s a win. And we’re world famous, even in America. Mormons everywhere have heard of our city.”

Petry toured the temple on Wednesday.

“I find it more beautiful than it was before,” he said of the renovation. “The baptistry is very different. I find it much prettier. The landscaping is wonderful. It’s a successful central point of Friedrichsdorf.”

A year after the temple was dedicated, the new mayor approached Elder Uchtdorf, flooring him with an astonishing, unsolicited offer. The temple was already such a success, the mayor said, that the city wanted the Church to buy another plot of land and build a missionary training center.

“The people went from critical to welcoming us,” Elder Uchtdorf said. With a laugh, he added, “They expected little horns, but they were really halos. Sometimes people have this impression of us as insular. Here, we now are seen as open and welcoming.”

Elder Uchtdorf may be the only person ever to serve as a temple committee chairman and then return to rededicate the same temple after a renovation. President Thomas S. Monson involved him deeply in the renovation, but when he died, assignments changed. 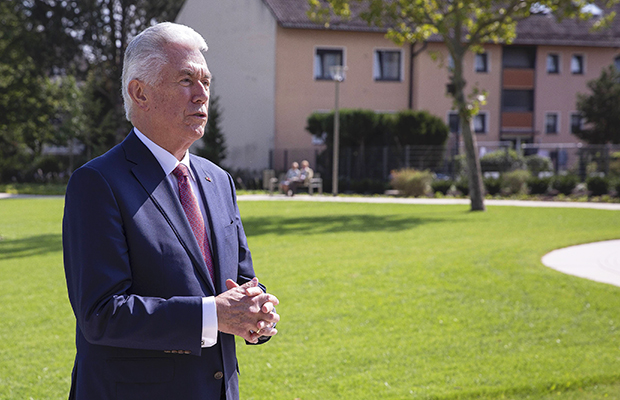 Then, during a weekly meeting of the First Presidency and Quorum of the Twelve Apostles in the Salt Lake Temple, President Nelson read the list of assignments for temple dedications.

“When I heard my name and Frankfurt, I didn’t yell or jump up,” Elder Uchtdorf said. “I stayed quiet and was grateful. I felt such a deep gratitude.

“Of course it means a lot emotionally. I never thought about this, really. We just plug along and do what we’re asked. Really, we do what we’re granted to do. It’s a deep feeling of joyful gratitude.”

While he will be a constant at the rededication, much has changed here since the original dedication. Friedrichsdorf did not have a ward or branch when the temple was built. The temple has become a magnet. A stake center now sits on the temple grounds, home to the Friedrichsdorf ward and stake, as well as another ward.

“I remember 32 years ago, the teenagers lined up in a tunnel putting shoe covers on the feet of 70,000 people who came to the open house,” Elder Uchtdorf said. “Today, they are bishops and stake presidents and Relief Society presidents. This gives me such hope for the future of the Church in Germany. Now their children are putting shoe covers on visitors at this open house. These multigenerational families are such a strength. We need more. The children of new converts to the Church will have the same experience at this open house and raise families that will have similar experiences in the future.”

As Elder and Sister Uchtdorf and their daughter, Antje, walked the grounds earlier this week, leading tours for journalists and government and religious leaders, their faces lit up over and over as they saw and greeted and hugged old friends.

“We have a jewel here,” Elder Uchtdorf said. “A spiritual jewel.” 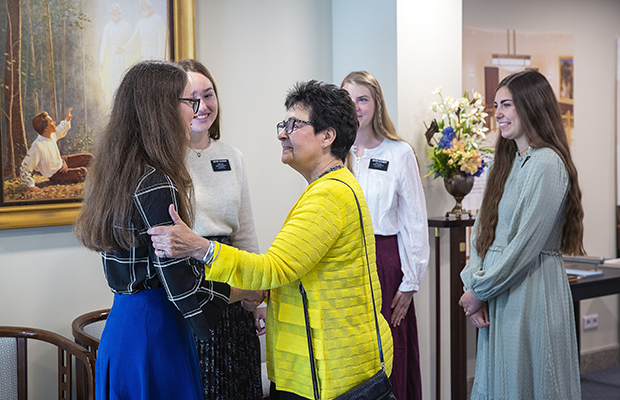 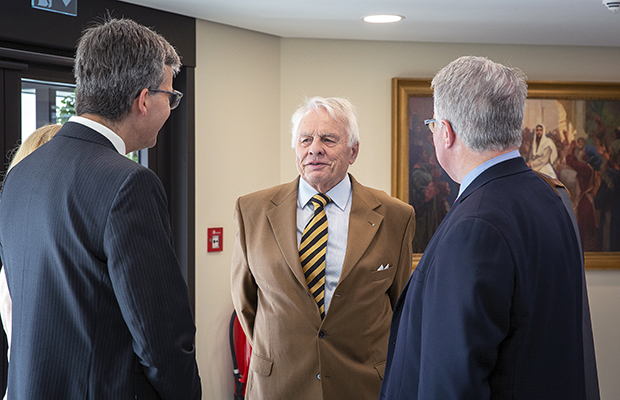 Karl Günther Petry, who has served on the Friedrichsdorf city council for 51 years, talks about the controversy over permitting the Frankfurt Germany Temple to be built there and the temple’s place in the community today during a conversation at the temple visitors’ center in Friedrichsdorf, Germany, on Tuesday, September 10, 2019. Photo by Flavio De Feo. 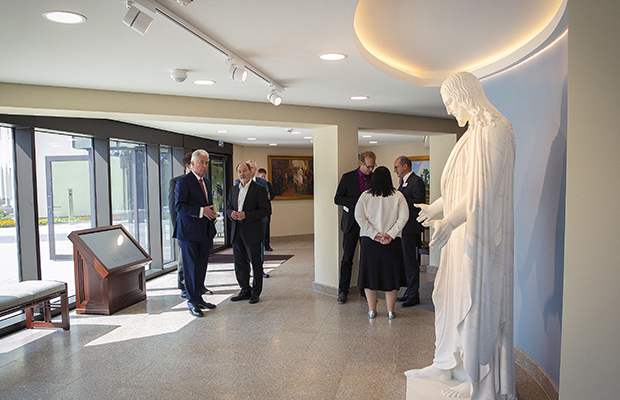 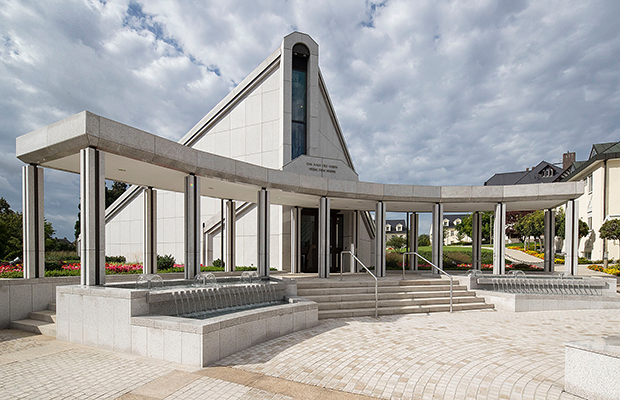 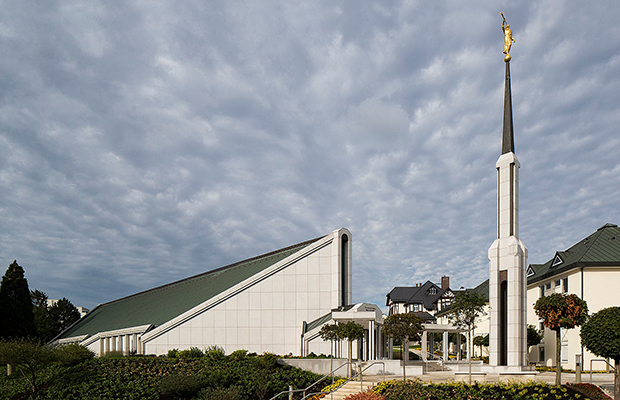 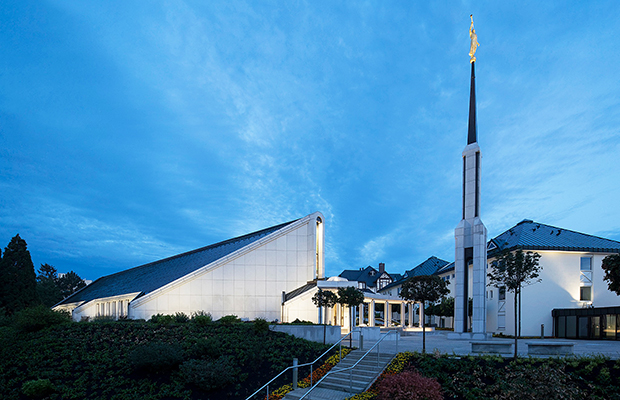