The Church Is Reaching Out and Helping 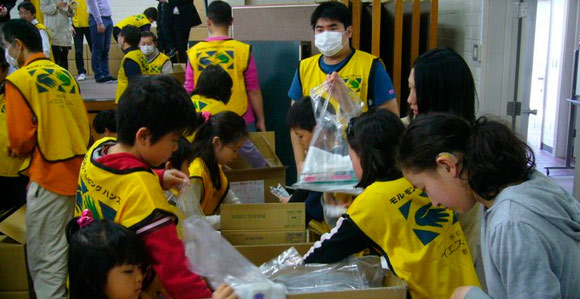 LDS missionaries work with others to remove debris from a shrine in Japan after the 2011 earthquake and tsunami. The Church distributed more than 250 tons of supplies during the first few months following the disaster, and more than 22,000 Church-sponsored volunteers participated.

“The Church and its members are reaching out and helping those in need.” —Lynn Samsel, Church director of emergency response

One year after a horrific earthquake and tsunami, prominent signs standing amid the miles and miles of devastation and destruction in Japan’s Miyagi prefecture send a one-word message of the resiliency of the people: Ganbaru, which means “hold out, stand firm, and hang in there.”

It is the same message the Church sent over and over again as it distributed immediate relief supplies after the disaster and, 12 months later, continues to support recovery efforts in the country.

Natural disasters across the globe, including the Japan quake, made 2011 the costliest year of disasters on record, according to a report issued by LDS Welfare Services. The first six months of 2011 alone saw $265 billion in economic losses—well above the previous record of $220 billion from 2005, when Hurricane Katrina struck the United States’ Gulf Coast.

“The Church and its members are reaching out and helping those in need,” said Lynn Samsel, the Church's director of emergency response.

In Japan, the 9.0-magnitude earthquake and powerful tsunami, which struck March 11, 2011, left 19,000 dead, displaced thousands, and destroyed more than 551,000 homes. The Church responded immediately, sending relief supplies to the disaster zone and later helping victims rebuild. The Church’s recovery efforts in Japan will continue into the fall of this year, said Brother Samsel. In addition, Church members have donated 175,000 hours of service in Japan. “One of the most significant contributions we make as a Church is the service of our members,” he said.

And it is not something that is just happening in Japan.

During 2011, the Church responded to 111 disasters in 50 countries, providing emergency aid and organizing thousands of volunteers to assist those affected.

The Church offered help after earthquakes in 10 separate countries. It also offered assistance to seven countries that suffered flooding. Thailand experienced one of the worst flooding events in the past century, which affected more than 70 percent of the country’s population.

In addition, since July 2011, severe drought—one of the worst in 60 years—has impacted Eastern Africa. The drought caused a severe food crisis across Somalia, Ethiopia, Kenya, and other countries in Eastern Africa that threatened the lives of more than 10 million people.

Tornadoes claimed nearly 600 lives in the United States in 2011.

More than 250 tons of supplies were distributed by the Church during the first few months following the disaster, including food, water, blankets, bedding, hygiene supplies, clothing, and fuel.

More than 22,000 Church-sponsored volunteers have provided more than 175,000 hours of service to date.

The Church established partnerships with government, volunteer, and industry organizations.

An employment resource center was established in the Sendai area to assist members and others in recovering livelihoods.

One of the worst droughts of the past 60 years spread throughout Eastern Africa, affecting more than 10 million people and causing the United Nations to declare a famine for the first time in 30 years.

Between the months of March and October 2011, there were more than 1,900 tornadoes reported in the United States (as compared with the annual average of 1,100).

The biggest tornado outbreaks occurred during the spring in Alabama and Missouri.

There were 576 deaths overall, with 160 of those resulting from the Joplin, Missouri, tornado alone.

The Church provided relief in eight states, with more than 5,000 volunteers helping with cleanup.

The most severe flooding to hit Thailand in the past century lasted for six months and affected 70 percent of the country’s population.

More than 815 deaths were reported. Damages are expected to exceed $45 billion.

Church members in Thailand assembled food kits, sanitation kits, blankets, clothes, and other relief items for those affected by the floods.

Hurricane Irene was a powerful hurricane that affected countries from the Caribbean to Canada. It was the biggest storm to hit the United States since Hurricane Katrina.

At least 14 states were affected, with historic flooding occurring in four of them.

The Church provided 120 tons of relief supplies and 50,000 hours of service from more than 7,000 Church volunteers and missionaries.

The following table lists the countries and regions assisted, along with the types of disasters experienced: (Source: Welfare Services)