The 90-Year Impact of Music and the Spoken Word 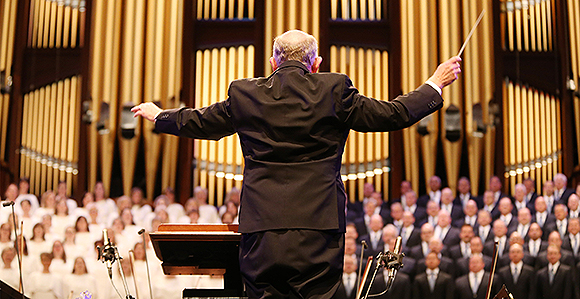 Conductor Mack Wilberg works with The Tabernacle Choir at Temple Square in Salt Lake City on Sunday, July 14, 2019, during a rehearsal for the 90th anniversary of Music and the Spoken Word. The broadcast originally began in 1929, making Music and the Spoken Word the longest-running continuously broadcast network program in the United States. Photo by Jeffrey D. Allred, Deseret News.

From a single man climbing a ladder and holding a microphone in the air, to a team of digital production and sound engineers and cameramen backed by radio and television broadcast teams, the means by which the hundreds of voices of The Tabernacle Choir are captured and sent out across the media airwaves around the world each week have changed drastically in the 90 years since the Choir’s first live radio broadcast of Music and the Spoken Word.

What hasn’t changed in all that time is the message and purpose behind the broadcast.

“The technology [is different], and the audience is much broader and wider now,” said Lloyd Newell, the announcer for the weekly program. “But the broadcast is essentially the same. . . . It’s beautiful music with an inspirational message. And the music and the messages are timeless.

“The music is the star of the program, and that’s what it’s about . . . but the message is meant to be a nondenominational, inspirational message that can reach anybody, anywhere, of any background, of any faith or no faith. Regardless of the place and time, our mission is to spread goodwill, to lift spirits,” Newell said.

On Sunday morning, July 14, Music and the Spoken Word celebrated its 90th anniversary and continued its legacy as the longest-running continuously broadcast network program in the United States.

As people filed into the Conference Center at Temple Square prior to the 9:30 a.m. 90th-anniversary broadcast, music from The Tabernacle Choir and Orchestra at Temple Square filled the room as they completed their rehearsal leading up to the broadcast. The audience, made up mostly of visitors and not locals from Utah, filled the lower center sections of seating at the Conference Center.

Just minutes before the broadcast began, Newell took his spot on the raised platform away from the stage and addressed the audience. He explained that the broadcast would be sent out to more than 2,000 TV and radio stations around the world. Those in attendance, he noted, were participating in yet another historic occasion for the longstanding program. As the lights dimmed and the Choir stood, a hushed reverence fell over the audience, and one of the stage crew announced 10 seconds to start.

Then, beginning as it did it’s very first broadcast 90 years before, the Choir sang out the first strains of the hymn “The Morning Breaks.”

“It’s a remarkable thing when you consider that for 90 years, this program has been on the air through good times and bad, through ups and downs, in the world, the nation, communities, and individual hearts,” Newell said. “And this broadcast has been like a trusted friend for so many people for so many, many decades.”

When the broadcast began back in 1929, it was a weekday afternoon program, explained Heidi Swinton, an author and historian who wrote a book about the history of The Tabernacle Choir.

“Radio was just in its infancy,” Swinton said, noting that the program itself was fairly basic.

Looking back at accounts of the Choir and their broadcasts from the 1930s, Swinton said Richard L. Evans, the producer, writer, and announcer of the program at the time—and later an Apostle—would write little notes in the margins of the program as he learned and adjusted each week.

“He was about 24 years old, so it kind of puts it all in perspective, . . . that these were young people and radio was new,” she said. “They were trying to find programming that people would tune into on a regular basis.”

Across Utah and eventually across the nation, Music and the Spoken Word became a staple radio program for hundreds of thousands of people each week.

Even Walter Cronkite, a well-known American broadcast journalist who performed with the Choir during one of their Christmas programs, could recall growing up listening to Music and the Spoken Word.

“I remember asking him when he was first introduced to the choir,” Swinton told the Church News. “And he said, ‘Oh, I would stretch out on the floor in front of the radio with my family and we’d listen to Music and the Spoken Word.’ So I think there was a lot of that.”

Across the country, Music and the Spoken Word became not only a part of people’s entertainment but also a way for many people to take a break from the pressures of life, Swinton said.

“They were on the air when the stock market fell and . . . even during the war, there was no break,” she said, noting the Tabernacle was closed to the public during the war years, so the Choir rarely had a live audience from 1942–1945.

But despite all that, the radio signals were strong, she said, and they broadcast the program each week to Europe and even out into the Pacific. “They still had Music and the Spoken Word going out over the air to all of the listeners.”

Throughout the past 90 years, the Choir and the broadcast have always been there to respond to what is happening in the world, “giving people something to hang on to that is positive,” Swinton said. “I think that the choir has always felt that their role was to lift people, to give them hope, to give them a sense that life is going to be better.”

Ron Jarrett, the Choir’s current president, noted that although Choir members get to spend, at most, 20 years performing, the small fraction of time they get to be a part of the broadcast week after week means a great deal to them.

“Music is the anchor to all that this broadcast is about,” he said. And whether a person is listening to or performing the music of the broadcast, he said there’s almost always “a song that’s going to make that difference for you.”

For Newell, Music and the Spoken Word has come to play an unexpected role in his life.

“I remember growing up with it,” Newell told the Church News. “In fact, I have an old radio, which is one of my treasured possessions. It’s an old upright Philco radio that my mother gave me.”

In her younger years, Newell said, his mother would gather with her family on their farm and listen to Music and the Spoken Word on that same radio each Sunday.

“So it has an honored place in our home,” he said. “When I look at that radio, I picture my mother on this little farm in the middle of nowhere in Idaho. They would gather and hear this miraculous medium, the radio, and listen to the broadcast.”

Newell grew up similarly attached to the program, but “never in my wildest dreams did I imagine that I someday would be the announcer of the broadcast.”

It’s hard for him to believe that 30 years have passed since he became the announcer for the program. And even though his career background is in TV news, he never planned on doing something like this.

“I run into people all the time, younger people, and they’ll say, ‘I want your job.’” Newell said. “Many people think it’s my job. They don’t realize it’s a [Church] calling.” 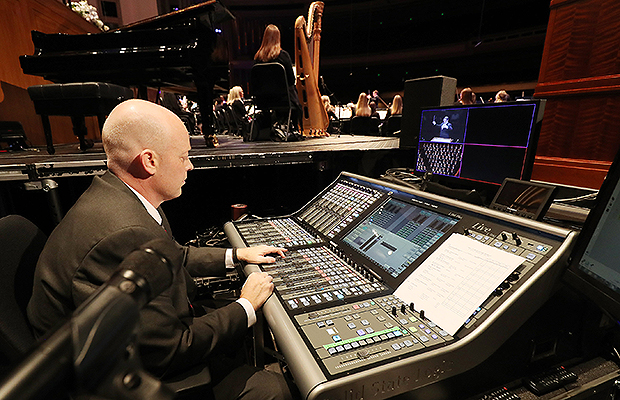 The fact that it is a calling, for almost all the performers involved, is part of what makes the broadcast so remarkable, Newell said.

“They’re just offering their very best. They’re not being paid for it, the Choir, the Orchestra, and me. We’re not paid for this; this is just our offering. It’s a willing, consecrated offering, and there’s something really sacred about that,” Newell said, adding that being a part of such a long-standing broadcast with the purpose of lifting people’s spirits is a remarkable opportunity.

“To be able to do something like that, that really blesses people and lifts their spirits, it’s a great blessing and honor,” he said. “It’s also a sacred responsibility. I think all of us sort of look at it that way.”

When President Gordon B. Hinckley called Newell to be the broadcast’s announcer after Elder Richard L. Evans retired the role, he told Newell that it would be his calling until further notice.

“It’s been 30 years,” Newell said with a laugh, and no further notice has come.

Each week as he prepares to stand in front of the cameras and microphone, Newell said the words of President Hinckley echo in his ears.

“When he called me, he said, ‘Each week needs to be an inspirational gem,’” Newell said.

And while not every week turns out to be a home run, Newell sincerely tries to make each week’s message “fresh, inspirational, insightful, and informative so that anyone can listen to it.”

That’s part of the program’s longevity, he said. Whether the messages came from him or his predecessor, an uplifting message with beautiful music is something that everyone can use, he said. “We all need something positive; we need inspiration, something good in our lives.”

To honor the longevity of the broadcast and the legacy of his predecessor, Newell signed off from the 90th anniversary broadcast the same way Richard L. Evans did for nearly 41 years before him. The parting words, much like the broadcast itself, offer a continuation of hope:

“Until we meet again, may peace be with you, this day and always.” 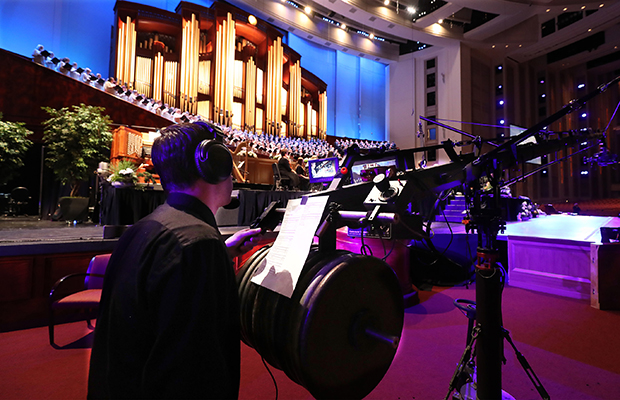 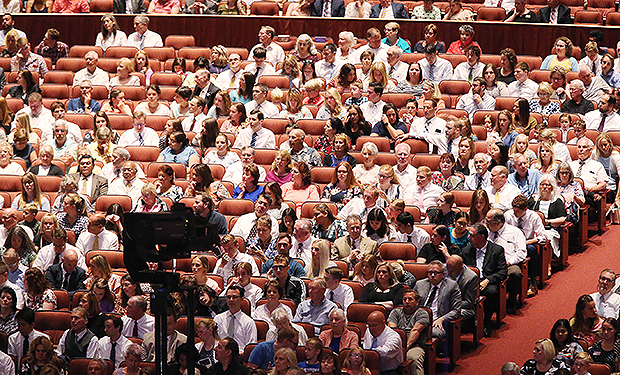 Attendees listen as The Tabernacle Choir at Temple Square rehearses for the 90th anniversary of Music and the Spoken Word in Salt Lake City on Sunday, July 14, 2019. Photo by Jeffrey D. Allred, Deseret News. 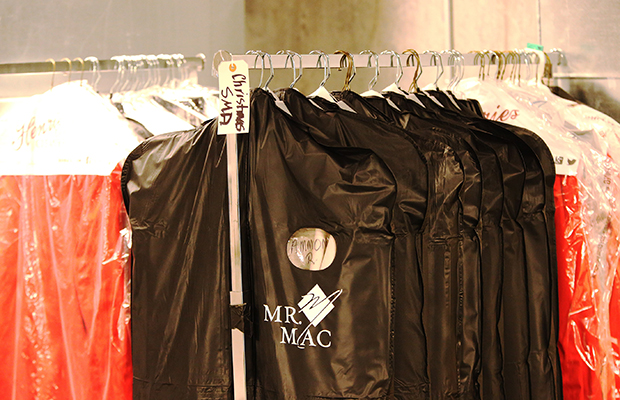 Apparel hangs as The Tabernacle Choir at Temple Square rehearses for Music and the Spoken Word in Salt Lake City on Sunday, July 14, 2019. Photo by Jeffrey D. Allred, Deseret News. 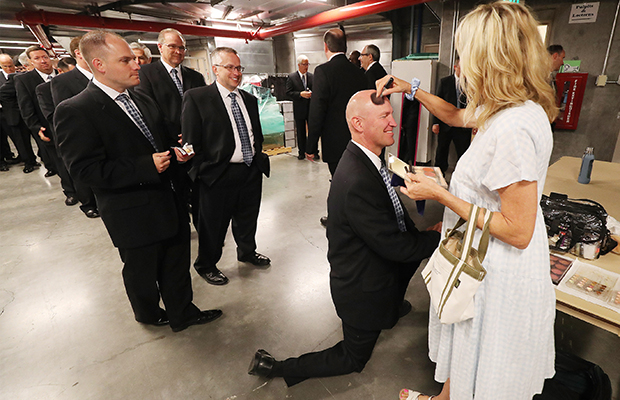 Laurie Vukich applies makeup to Ari Hunsaker as The Tabernacle Choir at Temple Square prepares for the 90th anniversary of Music and the Spoken Word in Salt Lake City on Sunday, July 14, 2019. Photo by Jeffrey D. Allred, Deseret News.