A new FamilySearch feature allows people to thank the individual who indexed their ancestor’s record.

“It’s important for volunteers to know that their work is valued by others and has meaning. It helps patrons to feel a greater sense of gratitude for the records they are able to search through and appreciate the sacrifice others have made to make them available.” —Jason Pierson, FamilySearch product manager

When Cherie Nielsen logged in to her FamilySearch account a few days ago, she noticed a new message. The subject line read “Thank you for indexing a record I found.”

She opened the message, and tears rolled down her cheeks. Someone had found a record she had indexed about a year prior.

Since then, she has received three more thank-you messages—each from a different indexing project.

“It just made me feel good to know that the hours I put into indexing have made a difference for somebody else,” said Nielsen, who lives in West Valley City, Utah, and serves as a stake indexing director.

FamilySearch released a new feature in October that allows patrons to send a thank-you message for any record that has the name of a volunteer attached.

Jason Pierson, a FamilySearch product manager, said indexers for many years have expressed their hope that the work they do would be valuable to others. This feature provides a way for indexers to know that value.

“It’s important for volunteers to know that their work is valued by others and has meaning,” Pierson said. “It helps patrons to feel a greater sense of gratitude for the records they are able to search through and appreciate the sacrifice others have made to make them available.”

This feature enhances the family history experience for all patrons, as it bridges the space between indexers and those who use the records to find their ancestors. It also provides another way of having a personal experience of joy in doing family history, he said.

While viewing an ancestor’s record on FamilySearch.org or in the Family Tree app, an option will be listed under document information to “thank the volunteer” if there is a name attached. A patron cannot see the name of the individual who indexed the record.

After the user clicks on “Thank the volunteer,” a prewritten message will then pop up on the screen. This message cannot be edited and will be signed with the patron’s first name only. Once the message is sent, it will appear in the indexer’s messages on FamilySearch.

Names are attached to all records that have been done through web indexing, as well as records from the 1940 census. Every record moving forward will have this feature, Pierson explained.

Sarah Cobabe, a FamilySearch marketing representative, said she hopes the feature helps patrons understand that “behind every record is a person who sacrificed time.”

“As people discover that family history is a worldwide effort of individuals working together, it encourages more people to participate,” Pierson added.

For Nielsen, receiving a thank-you message gave her a desire to open the hints she had received. And one of those hints led her to finding five Swedish children and reserving some of their names for baptism.

“Any little bit of encouragement, it’s surprising what a big jump it will give,” she said.

About 4,700 thank-you messages were sent in the first two weeks of the feature going live. For more information on the “Thank the volunteer” feature, visit the FamilySearch blog. 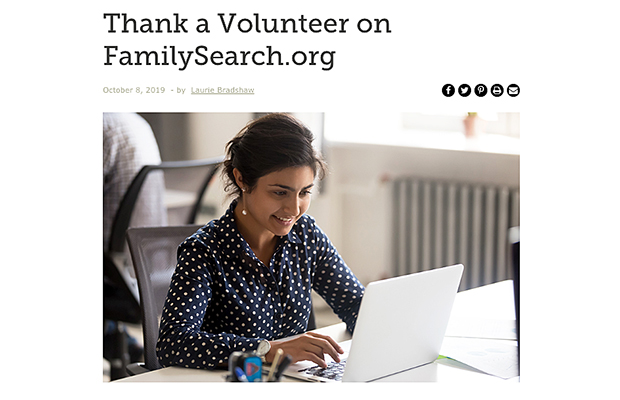 A new FamilySearch feature allows people to thank the individual who indexed their ancestor’s record. Photo courtesy of FamilySearch.org. 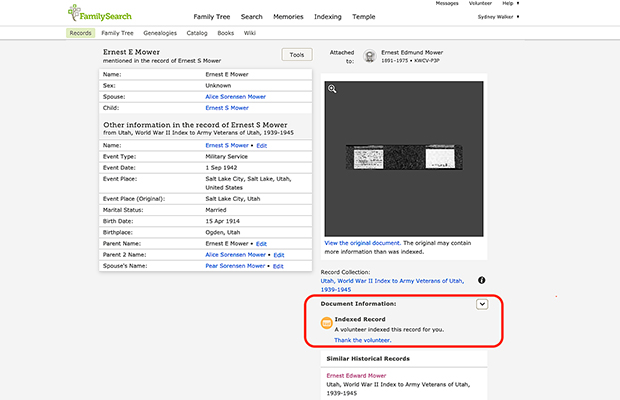 Under “Document Information,” an option will be listed to thank the volunteer who indexed the record. Photo courtesy of FamilySearch.org. 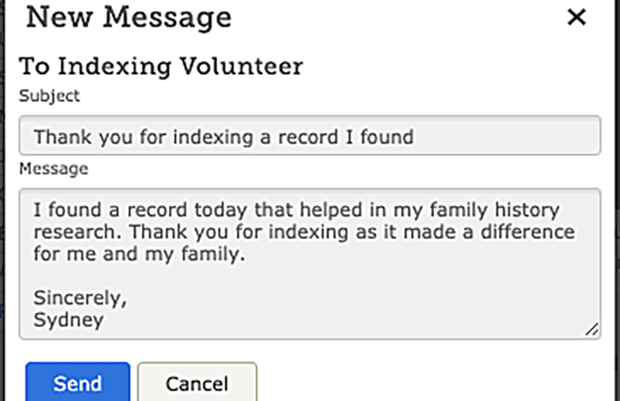 A prewritten message will appear. This message cannot be edited. Photo courtesy of FamilySearch.org.