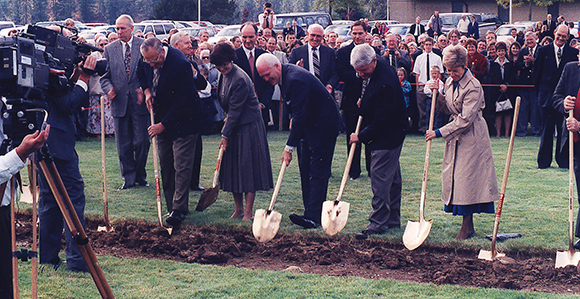 With fewer than two dozen temples built and dedicated in the Church’s first 150 years, the 22 days separating the groundbreakings for the Manti Utah Temple (April 25, 1877) and the Logan Utah Temple (May 18, 1877) was the shortest time difference between the start of two temples for more than a century.

Then came a substantial increase in temples in the early 1980s—17 dedicated from 1983 to 1985 alone. The frequency meant the groundbreakings started coming more frequently and closer together.

In a seven-day stretch in February 1981, President Spencer W. Kimball presided at three temple groundbreakings in the South Pacific. Following the February 13 ceremony for the Papeete Tahiti Temple, President Kimball held back-to-back groundbreakings for the Nuku’alofa Tonga and Apia Samoa Temples on February 18 and 19, respectively.

Two groundbreakings in as many days happened twice in September 1982—with Elder Boyd K. Packer in Lima, Peru, on the 11th, and Elder Richard G. Scott in Guatemala City, Guatemala, on the 12th.

With President Gordon B. Hinckley’s push to have 100 temples by the end of the year 2000, groundbreakings, construction, and dedications increased dramatically. President James E. Faust, then Second Counselor to President Hinckley, held consecutive groundbreakings in Brazil in early May 1998—in Campinas on May 1 and Porto Alegre on May 2.

Since then, 10 other dates have seen ground broken for at least two different temples on the same day—including three temples each on March 13, 1999, and May 29, 1999. 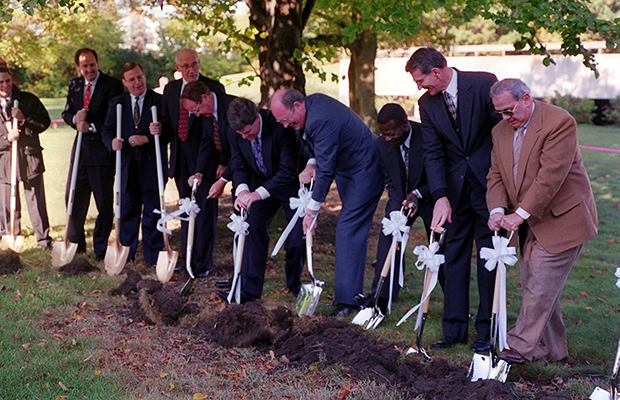