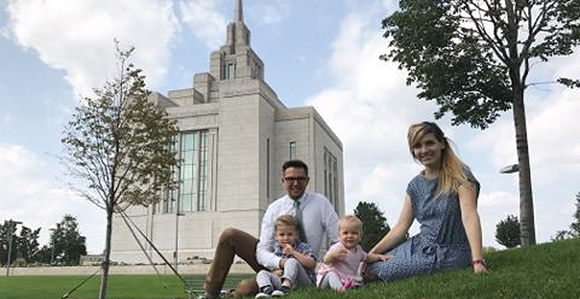 Renat Kashapov with his wife, Lena, and their two children outside the Kyiv Ukraine Temple. The family was elated to hear a temple announced in their own country, Russia.

“Every foundation stone that is laid for a temple, and every temple completed … lessens the power of Satan on the earth, and increases the power of God and godliness.” —President George Q. Cannon

At 1 a.m. on April 2, long after putting their children to bed, Konstantin Serebrennikov and his wife, Maria, sat in their home in St. Petersburg watching general conference via the internet. It was the last session and President Russell M. Nelson was the final speaker.

Shock and disbelief ran through their heads, and for a moment, Serebrennikov said, he even thought it might be an April Fool’s joke. And even a week later, they are still in shock because they still don’t know where the newly announced temple is going to be located.

“Russia is big, so even if they build a temple kind of in the middle, it’s still far away from us,” Serebrennikov said. “But still of course we are happy. We look forward to participation in the dedication and temple open house.”

As residents in St. Petersburg, Serebrennikov and his family count themselves extremely blessed and even a little “spoiled” to live within a manageable driving distance of the Helsinki Finland Temple.

Many of the wards in St. Petersburg are able to plan temple trips a few times a year, but others are not so lucky. With only three stakes established in the country, all located in the western part of the country, many of the members are far removed from temple access, and with the expenses of visas and flights, accessing temples in nearby countries isn’t always so easy.

For Renat Kashapov, a member living in Moscow, the news of the temple came a bit later.

“I was sleeping,” Kashapov said. “And then in the middle of the night, I woke up to a text message from a friend who used to serve in Russia. He’s an American, and his text message was ‘A TEMPLE IN RUSSIA!’ with lots of exclamation points.”

But despite the urgency and excitement of the message, Kashapov said he went back to sleep. Then, at around 5 in the morning, he woke up questioning if the text had been real. After searching through all of President Nelson’s talks on ChurchofJesusChrist.org, he finally came to the announcement of the temple.

“I can’t believe we survived to live to the day that announcement was made because we didn’t believe that in the near future we would hear anything like that,” Kashapov said. “But the problem was, it was 5 in the morning and everyone was in bed, so I couldn’t share with anybody.”

It wasn’t until he was headed out the door for work that his wife woke up and he was able to momentarily celebrate the news with her.

On the way to work, Kashapov said he felt overwhelmed by the news and decided to start a Facebook live video where he shared his feelings and testimony.

“I just shared my thoughts … that we need to prepare ourselves to be even better because if the Lord wants to build a temple here, He wants it to be busy,” Kashapov said.

Nearly 4,000 miles away, members in Bengaluru, India, were having similar reactions to the announcement of the Bengaluru Temple, which will be the first temple in India.

Bob Anthony, a counselor in the Bengaluru India Stake presidency, woke up to a stream of emails, WhatsApp, and Facebook messages at 5 a.m. after having decided to wait until Monday morning to watch the Sunday afternoon session of general conference with his wife.

“When I got up at around 6 a.m. and read the messages, I thought I was still sleeping and dreaming,” President Anthony said. “When I saw a clip on WhatsApp where President Nelson announced the Bengaluru Temple, I broke down. I just couldn’t believe. I shouted for joy and wept.”

After waking up his family and replaying the video to share the news with them, President Anthony said, “We all immediately got on our knees and said a prayer filled with intense emotions. We thanked the Lord.”

As a member of the stake presidency in the city where the site for the new temple is planned, President Anthony described how the announcement comes as a blessing in response to the hard work the members have put in doing family history work.

Following the example of Saints in the Ivory Coast, where a temple was announced in 2015 following high numbers of names submitted to temples from the area, President Anthony explained the work and excitement of his entire stake.

“Everyone is emotional,” President Anthony said. “Each of them wants to contribute now in some ways for the temple. … I know that we have felt the Holy Ghost in great abundance.”

While watching general conference together as a ward on Sunday, April 8, President Anthony described how they “all shouted for joy when the temple was announced.”

Immediately following the closing session, “my first token of gratitude was to order two cakes with the temple picture that we cut together in the ward,” President Anthony said.

Just north of Bengaluru, in Hyderabad, the city with the first ever stake in India, Manohar Mekala expressed his gratitude for the blessing of a temple.

“It’s a dream come true for me and my family,” Mekala said. “I had a strong feeling one day we would have a temple in India, but I never thought so soon that God would bless this great nation with the temple blessings.”

Having been unable to attend a temple prior to serving his mission in 1988, Mekala said that as he taught others about the temple as a missionary, he developed an even stronger desire to visit a temple. In 1995, he was finally able to visit the Manila Philippines Temple, where he was endowed and then sealed to his family.

“Since then I have never been to a temple,” Mekala said.

“In the month of May 2017, my daughter got married and we planned to witness her sealing in Hong Kong,” Mekala said. “Many families are sealed in Hong Kong, but now to get visas to Hong Kong is a big challenge.”

Despite having planned well in advance for their daughter, Monica Mekala, and her husband, Raj Kumar Ganaparam, to be sealed in Hong Kong, the family is still waiting for visas over a year later.

“Saints in India go through a lot of visa problems, so we don’t have a chance to visit a temple often,” Mekala said. “Now I can see the Lord is aware of all the difficulties we are going through, and that’s why the Lord announced His house in India. I know many Saints have prayed, and now He has answered our prayers.” 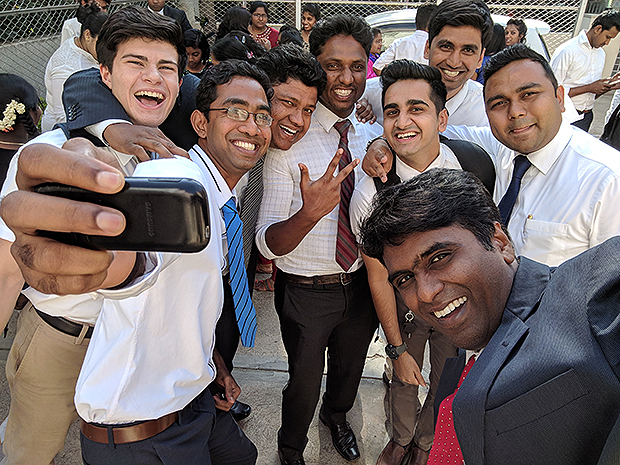 Members in Bengaluru, India, celebrate the announcement of the temple in India after watching general conference. Photo courtesy of Bob Anthony.

In Salt Lake City, as gasps were heard throughout the Conference Center with each new temple location’s announcement, Sister Reyna I. Aburto, Second Counselor in the Relief Society General Presidency, sat smiling from her seat behind President Nelson as he announced the first temple for her hometown of Managua, Nicaragua.

“Hearing the wonderful news about the Managua Nicaragua Temple was a pleasant surprise for me,” Sister Aburto said. “My heart is full of gratitude toward the Lord because I know that so many members in my home country will have the blessing of a temple closer to them. … It will be a source of revelation, comfort, and peace for the faithful members in Nicaragua.”

And for Rodolfo Aviles and his family, the announcement has already served as a comfort and an answer to their prayers.

After moving to Utah a year ago, Aviles said he had been feeling that perhaps a temple was in the near future for his hometown of Managua. After having told his sister, who still lives in Nicaragua, that he thought a temple announcement might be coming for them, she made every effort and sacrifice necessary to make a trip with her mother to visit Aviles in Utah.

“We thought that it would be on Saturday that they would announce [temples],” Aviles said, explaining that he and his family got tickets for the Saturday sessions of conference. “So it was 3:55 p.m. on Sunday, the last session, and we thought, ‘OK, well they didn’t announce any new temples.’”

Moments later, they were all crying after hearing the prophet say “Managua, Nicaragua.”

“It was quite an emotional moment,” Aviles said. “It was just an answer to a lot of prayers.” 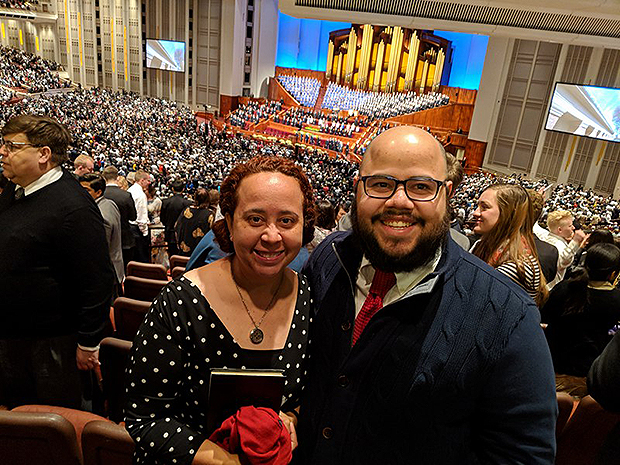 Rodolfo Avilés with his mother, Nora Avilés, in the Conference Center on March 31, 2018, a day before a temple was announced in their home country of Nicaragua. Photo courtesy of Rodolfo Avilés.

Growing up in Nicaragua, the nearest temple for Aviles was in Guatemala, and it was never an easy trip to get there. Passports were often hard to come by, and on some trips the buses would get stuck at the borders for hours.

“It was quite difficult and challenging to get to the temple,” Aviles said. “But as soon as you could see that angel on top of the temple, it was all worth it.”

As they pertain to the first temple for each country—Russia, India, and Nicaragua—the announcements made on Sunday, April 1, 2018, by President Nelson mark a truly historic moment in Church history and signify a hastening of the Lord’s work around the globe.

Quoting George Q. Cannon, First Counselor in the First Presidency, Mekala said, “‘Every foundation stone that is laid for a temple, and every temple completed … lessens the power of Satan on the earth, and increases the power of God and godliness.’ And as we receive the temple of the Lord in our midst, the Lord will hasten His work.” 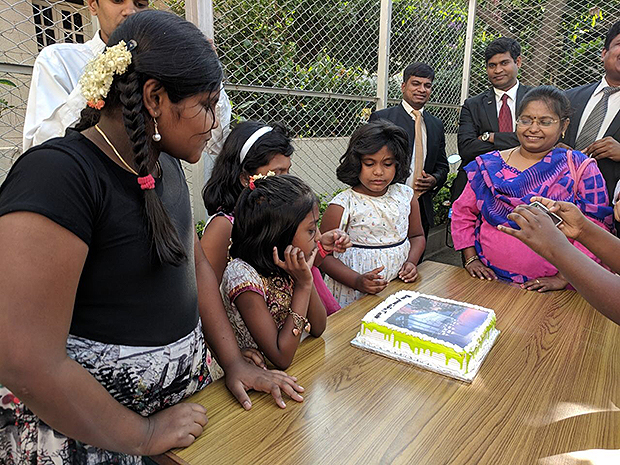 Members in Bengaluru, India, wait to cut a cake with a picture of the Salt Lake Temple to celebrate the announcement of a temple for India following general conference. Photo courtesy of Bob Anthony. 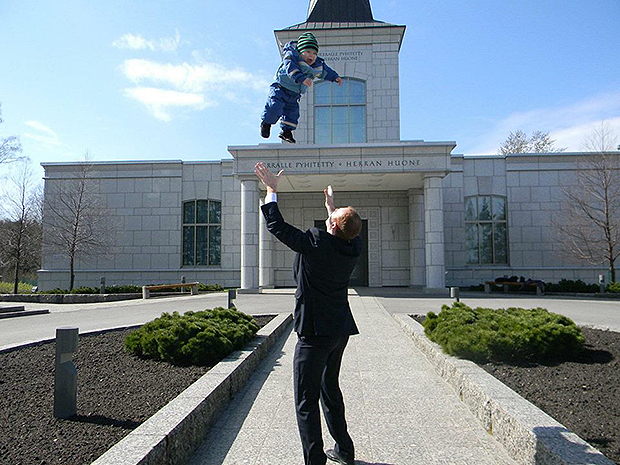