The Tegucigalpa Honduras Temple open house received more than 100,000 visitors in the first two weeks, beginning February 9 and continuing through March 2 prior to its dedication on March 17.

“The dew falls on Honduras each day with blessings.” —Yolanda Amado, member and open house visitor

“I have been waiting for this temple for 58 years,” said José Ruiz, with the new Tegucigalpa Honduras Temple framed in the picture window behind him. Brother Ruiz, a member of the Girasoles Ward, Tegucigalpa Honduras Stake, was baptized in November of 1954, only the ninth person in his country to join the Church.

He spoke of the temple as a “marvelous” gift to the members in Honduras, just as the growth he has seen in the Church over almost 60 years has been a marvel brought about by the faith and perseverance of missionaries and members.

More than 100,000 visitors streamed through the temple in the first two weeks of the open house, which began February 9 to run through March 2 prior to the temple dedication March 17. Members and other visitors commented almost unanimously on the peace they experienced inside the temple; missionaries reported that little children seemed to feel it most. “One little girl told us she felt like she could speak to God in the temple,” said Sister Katy Bundie of the Honduras Tegucigalpa Mission. She said one investigator she and her companion have been teaching told them immediately when she came out of the temple that she wanted to be baptized.

The Tegucigalpa Temple is the sixth in Central America.

Missionaries received more than 5,000 referrals in the first two weeks of the open house. They reported that most of the referral cards were filled out by people who were not members of the Church, wanting to know more after what they had experienced in the temple.

Many of those nonmembers were brought to the open house by Latter-day Saint friends, and many of the visitors came from other places—from the San Pedro Sula area on the country’s North Coast, and from Nicaragua. One San Pedro Sula stake brought 18 buses full of members and guests to the temple on the second Saturday of the open house, and repeated that achievement again the next weekend.

Latter-day Saints outside Tegucigalpa are very excited about the temple for practical reasons. Traveling by bus to the temple in Guatemala City was an eight-hour trip, meaning temple excursions had to be planned over three days. Now the travel time has been cut in half, so that ward or stake temple trips can be planned for just one day. Because of savings in time and bus fare, the cost has been cut by 90 percent. 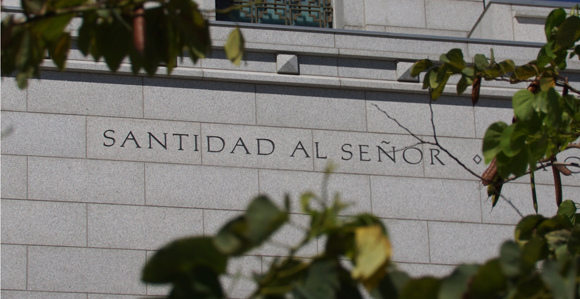 Tree branches frame the words “Holiness to the Lord” in Spanish on the front of the Tegucigalpa Honduras Temple. Photo by Don Searle.

But members are more excited about the temple because of the spiritual blessings that will flow from it.

Dinapaz de Fajardo, who brought eight visitors with her to the temple from La Ceiba, on the North Coast, said, “I don’t have words to describe my happiness” because of the spiritual blessings the temple will bring. A member since 1972, she expects the coming of a temple in Tegucigalpa to fuel growth in her stake.

Juan and Yesenia Barahona of Tegucigalpa, married just eight months, see the temple as a great blessing because they will be able to visit the house of the Lord more frequently. Rosa Angela Velasquez of San Pedro Sula points out that among the beneficiaries of the new temple will be “our dead,” since many ancestors of Honduran members may be able to enjoy eternal blessings sooner. She comments on how strongly one can feel the influence of the Holy Ghost in the temple even though it has not yet been dedicated.

Perhaps the blessing of having a temple in Tegucigalpa may seem sweetest to members who have labored long and faithfully to help build the Church in their areas.

José Leonel Valladares, patriarch of the Comayaguela Honduras Stake, was baptized at age 8 in 1963. His parents, baptized in 1954, reared their family in the Church. (They traveled to be sealed in the Mesa Arizona Temple in 1979 when it was a two-week trip, including five days on the road each way.) Brother Valladares notes that the activities and classes of the Church—Mutual and Sunday School—were a way of life for young members of his generation. But as they have matured, their perspectives on life and eternity have changed; they have learned to love temple blessings. 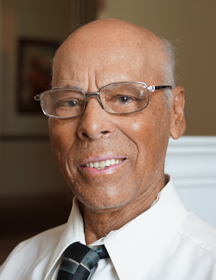 José Ruiz, a member of the Girasoles Ward, Tegucigalpa Honduras Stake and ninth person in his country to join the Church, has waited 58 years for a temple. Photo by Don Searle.

Over the years, there has also been a great change in the way Hondurans view the Church. It is seen as a strong organization that teaches morality and good values to youth. Now, through the new temple, “people are awakening to the fact that we are Christians.”

Jorge Alberto Sierra has been a member for more than 40 years, since 1972, when there were only three branches in Tegucigalpa. He and his wife were sealed on one of those two-week trips to Mesa in 1977.

The orientation toward eternal blessings, he says, does not depend on having a temple close by. “I think it doesn’t matter how far away the temple is—for some people the temple is in their hearts.” Still, a temple in Honduras “has been a long-time dream for some members,” and it will be an “enormous blessing.”

Brother Sierra and his wife established the tradition in their family of taking each of their children to the temple to do baptisms for the dead when the child turned 12. Now the Sierras’ oldest granddaughters are approaching 12—one is already very active in name extraction—and Brother and Sister Sierra are looking forward to continuing the tradition with their grandchildren.

Yolanda Amado, baptized in 1969, served as a missionary in the Guatemala-El Salvador Mission. She looks at the crowds streaming through the new temple and speaks of the joy she feels at seeing a house of the Lord in her home country. “It’s marvelous to see how the heavens are opened” to help the Saints and the youth, she said.

“The dew falls on Honduras each day with blessings.” 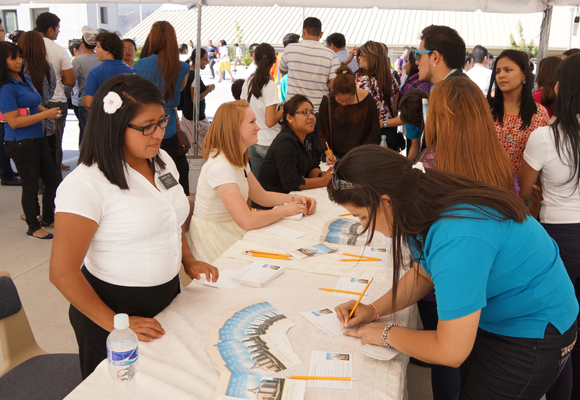