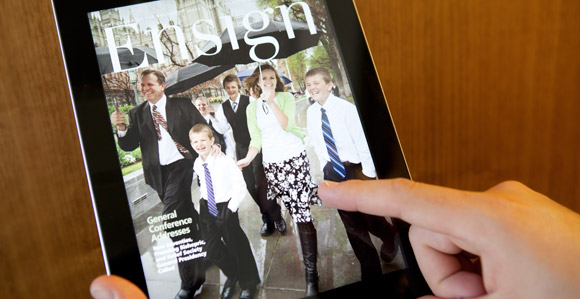 The Church is producing a new tablet app for the Liahona and updating the app for the Ensign. Both apps will feature the October 2011, November 2011, and May 2012 issues of the magazines (the Book of Mormon issue and the addresses from the two most recent general conferences).

As part of an ongoing effort to share the prophetic word through a variety of channels, the Church is making available two prototype apps (one release and one update) that feature magazine content.

The LDS Liahona app is in production, while the LDS Ensign app is now available. Both apps are designed exclusively for tablets and will be available later this month.

Both apps feature the October 2011, November 2011, and May 2012 issues of the respective magazines—in other words, the Book of Mormon issue and the two most recent general conference issues.

LDS Liahona is a new release and will be available in English, Portuguese, and Spanish. LDS Ensign is an update and, like its namesake magazine, is offered in English only.

The apps offer a more interactive—even immersive—magazine experience; for instance, users can read the magazine while listening to an audio file of the same text. (In fact, in the October 2011 issue on the LDS Ensign app, the audio file associated with President Ezra Taft Benson’s “The Book of Mormon—Keystone of Our Religion” is a recording of President Benson delivering this talk in 1986.)

In some articles in that same issue, artwork associated with particular text is presented as a slideshow; in others, the artwork is shown in high resolution, allowing users to scroll across screens to examine it in detail. And Elder Jeffrey R. Holland’s article “A Testimony, a Covenant, and a Witness” links to a Mormon Message about the Book of Mormon that is also from Elder Holland.

The conference issues likewise have interactive features, including the ability to listen to or watch the speakers delivering their conference addresses.

Both apps are designed for use on either the Android or Apple platforms. (The Apple version will be placed inside the Newsstand, a feature previously not offered. The Android version will be a standalone app.) Both will become available this month through the Android Market and the Apple Store.

The apps include a user survey that invites feedback; that feedback will be considered as the Church Priesthood Department continues to develop tablet offerings. Users can find this function at the end of any magazine issue's table of contents.