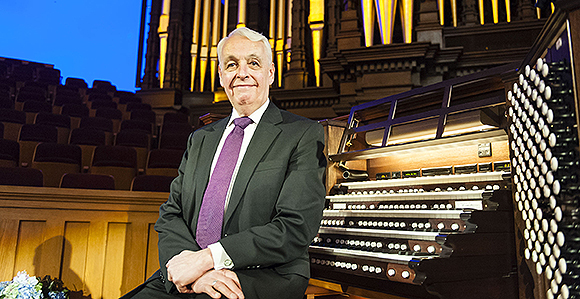 Clay Christiansen has enjoyed a 36-year career with the Mormon Tabernacle Choir.

Clay Christiansen was on the verge of desperation—the kind that makes a person contemplate crazy things like trying to scale one of the gates of Temple Square.

Years in advance of his September 15, 1982, appointment as one of the three Salt Lake Tabernacle organists, Christiansen had already established a frequent presence in the Tabernacle as a guest artist filling in for the principal organists on some of the daily noon recitals presented free to tourists.

Now, on this eve of Easter Sunday, he had stayed a bit too long in the historic building, rehearsing for his next recital. When he finally did leave and approached the Temple Square west gate, he was stunned to find it locked with not a soul around to open it for him.

“I knew it was a half-hour or so before I would be needed at St. Mark's Episcopal Cathedral for a service at midnight, when all the lights come on after a long Easter vigil service that didn’t have any music in it.”

Christiansen was employed at the time as the cathedral’s organist and choirmaster.

“I’m panicking, thinking if I’m not at St. Mark’s when the Easter service starts, I’ll be in deep trouble,” he recalled in a recent interview while seated next to the Tabernacle’s organ console. “I looked up at those gates, thinking, ‘They’re a little high to scale.’ Finally, security came and let me out.”

Later, of course, at age 33, Christiansen would forsake the position at St. Mark’s to become one of the three full-time Tabernacle organists, replacing the retiring Roy Darley and joining Robert Cundick and John Longhurst.

This year, Christiansen will join those men on the roster of former Tabernacle organists when he retires at the end of April.

Also on that roster is the legendary Alexander Schreiner, a mentor of Christiansen’s.

“I was his last master’s candidate in organ performance at the University of Utah,” Christiansen said.

“Schreiner was a great inspiration,” he said. “After I began teaching, I would always leave that noon slot free, and I would come over here and sit behind him while he played his recital. Then we’d go back to the organists’ room, which is now a janitor’s closet, and chat for a while until he was through, and then we would part company. And so I had the chance not only to absorb his musical ideas through watching him but to be taught by him as well.”

Arguably, the celebrated organist’s influence reached Christiansen long before that. Born February 28, 1949, Christiansen spent the first 13 years of his life in the small southeastern Utah town of Emery, where he “was always attracted to music and to the sound of choir, particularly the [Mormon] Tabernacle Choir when I would hear it over the radio.” Schreiner’s renowned organ virtuosity, of course, was inseparable from the choir’s broadcasts at that time.

His father, Rellus, died when Christiansen was 13, and his mother, Lila, took him and his four younger sisters to Provo so she could attend Brigham Young University. There, Clay began to study organ with Joseph J. Keeler, a luminary in the LDS music world, who had established the organ program at BYU and who composed the music for the LDS hymn “Men Are That They Might Have Joy” (Hymns, no. 275).

“I would ride my bike to Dixon Junior High in Provo and, after school on Tuesdays and Thursdays, would pedal over to lower campus where his studio and classes were,” Christiansen recalled. “I joined the college kids for those organ classes in addition to my private lessons.”

He would commute to Provo to continue the lessons after the family moved first to Salt Lake City and then to Morgan, Utah. After graduating from Morgan High School, he enrolled at BYU and continued to learn from Keeler.

While an undergraduate at the school, he played piano for a longstanding dance band, the Bud Hutchings Orchestra, from 1970 to 1971.

About this time, the brand-new instrument at St. Mark’s in Salt Lake City was the talk of the organists’ community in Utah. The cathedral organist invited Keeler to send up one of his students to play a recital, and Christiansen was given that privilege.

By the time the organist position became open at the cathedral, Christiansen had done some substituting there. He was interviewed by a search committee and at age 23 got the job, playing his first recital as organist five years to the day since he had played his student recital there.

Meanwhile, in the Church, he had already begun to make his mark, playing organ at age 19 in the Church’s Young Artists Music Festival during the then-annual MIA June Conference.

This was in 1968, when the Vietnam War was in full engagement, and, in consequence of the military draft, the Church was restricted in the number of young missionaries that could be sent out. So, while a sophomore at BYU, Christiansen elected to marry his sweetheart, Diane Francom, in the Salt Lake Temple on June 12 of that year and start a family of 13 children, 12 of whom are living today.

The appointment four years later at the cathedral gave him not only “the income to help raise a burgeoning family, but a place also of quality to teach organ and piano and to hold my student recitals.”

He even put on a local radio program, Concert from St. Mark’s, during the last five of his ten years as organist there.

No one seemed to be bothered by a Mormon occupying the organist’s post at an Episcopal cathedral.

“I think they respected it,” he said, adding that at social gatherings in the fellowship hall, they watched out for him, making sure he knew which was the non-alcoholic punch bowl.

“The dean of the cathedral, the Very Reverend Robert M. Anderson, was a great guy with a sense of humor,” he said. “He referred to me as ‘the Mormon Apostle to the Gentiles.’”

But Christiansen would also serve members of the Jewish faith, as organist for Congregation Kol Ami during the first five years of their then-new synagogue in Salt Lake City, 1977–1982. His wife, Diane, even sang in the choir on their High Holy Days.

One day, while he was teaching an organ lesson in the rear loft at St. Mark’s, veteran Tabernacle organist Cundick appeared and asked to speak with him. “We’ve received permission to appoint another Tabernacle organist, and we would like to have you,” he said.

Thus began nearly 36 years of a tenure in which no two days have been exactly the same.

Clay Christiansen, Tabernacle organist, sits at the organ inside of the Tabernacle on Temple Square. Photo by Adam Fondren, Deseret News.

“There is the duty of maintaining this unique, daily recital series that we have here,” he said, a tradition of nearly 100 years in which each full-time organist plays two days a week.

“Then, of course, there’s accompanying the [Mormon] Tabernacle Choir and playing for the unique Music and the Spoken Word broadcast.”

Beyond that, Christiansen has been on the Musical Instruments Selection Committee at Church headquarters, approving builders or vendors of organs and pianos at meetinghouses around the world.

“I have the duty of approving organists to play various events and concerts in the Assembly Hall on Temple Square, as well as organists here in the Tabernacle for special concerts,” he said. “And we all audition the guest organists who are eventually called to help with the noon recitals.”

Along the way, he attained a doctorate in organ composition from the University of Utah. Much of the work, in fact, involves composing and arranging pieces for the broadcast and other purposes. One of his many published pieces is the hymn “In Fasting We Approach Thee,” for which he composed the music and with which Church members have been acquainted since its publication in the current hymnbook in 1985 (no. 139).

“I wanted it to be a simple, humble kind of melody in the key of C, almost a simple chant,” he said, an uncomplicated outpouring of faith.

“I’ve loved playing for general conference and, in that same vein, playing for President Gordon B. Hinckley’s and President Thomas S. Monson’s funerals,” he said.

A career highlight, he said, was his involvement with fellow Tabernacle organists John Longhurst and Richard Elliott in the selection and design of the organ for the Conference Center, completed in 2000. Carried on between 2000 and 2003, the organ construction and installation were chronicled in a book Longhurst wrote called Magnum Opus. 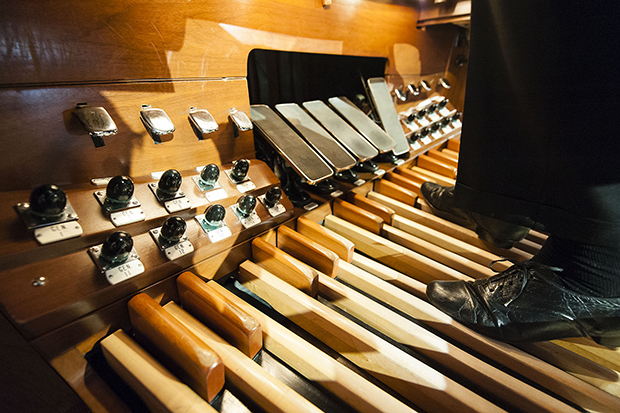 According to Christiansen, one of the highlights of his career was participating in the design and selection of the organ in the Conference Center. Photo by Adam Fondren, Deseret News.

“That was an unprecedented space in which to put a pipe organ of that size and sort,” he said. “We didn’t know how successful it would be, but it has really surpassed our dreams and even those of the organ builder. That instrument is the only thing that can function in that building without being amplified through the PA system.”

He has had what he calls “mountaintop experiences,” including playing for both Jewish and Arab people in Jerusalem at the BYU Center there. “And of course, we had a grand experience with the choir performing in wonderful halls such as Musikverein in Vienna two years ago during the European tour.”

Immediate future plans for Christiansen include performing next month in St. Louis for a gathering of the American Guild of Organists chapter and, a year from now, at the Basilica of the National Shrine of the Immaculate Conception in Washington, D.C., for the Octave of Easter Recital.

Beyond that, he plans to return to teaching, a beloved endeavor for which he hasn’t had time since his days at St. Mark’s.

He looks forward to spending time with his sizable posterity that includes 60 grandchildren and two great-grandchildren. He will indulge his passion for vegetable gardening. He has planted 60 pots of tomatoes from seed and anticipates another bountiful harvest at his home in downtown Bountiful, Utah.

And, next month, he will have an organ in his home for the first time, a digital, state-of-the-art instrument being custom built by a friend in Southern California. “That will allow me to stay in shape so I can keep playing, helping out occasionally for noon recitals and other engagements.” 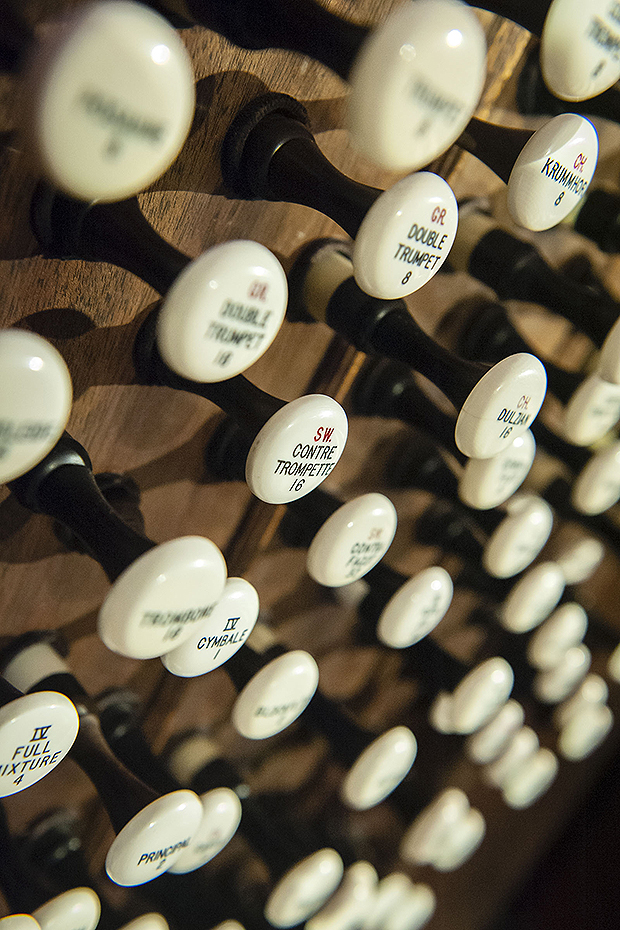 Christiansen felt it an honor to play the organ for general conference and the funerals of President Gordon B. Hinckley and President Thomas S. Monson. Photo by Adam Fondren, Deseret News.