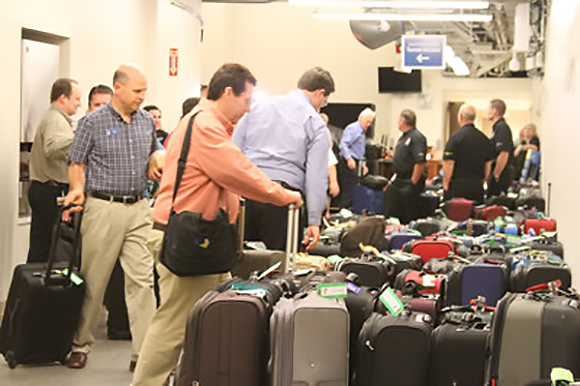 Mormon Tabernacle Choir members who will embark on choir and Orchestra at Temple Square Atlantic Coast tour bring their bags to drop-off point at Conference Center in Salt Lake City to be transported ahead on trucks to their destination point.

A while ago, Mormon Tabernacle Choir musical director Mack Wilberg was in the office of administrative manager Barry Anderson.

“I said, ‘Mack, give me a list of where you want to go,’” Brother Anderson recounted. “Mack and I are the same age, and I said, ‘Someday we’re going to be old men sitting on a park bench, and we don’t want to look at each other and say, “You know, I wish we would have gone here, or gone here.”’”

“We’re still working on it,” the administrative manager said.

But the list is the genesis, he said, of the Atlantic Coast tour on which the choir and its sister aggregation, the Orchestra at Temple Square, will embark next week. They will visit five major cities in Maryland, New York, and Massachusetts. The itinerary includes two concerts at New York’s famous Carnegie Hall.

The first venue is in Bethesda, Maryland, Thursday, June 25, with a concert at the Music Center at Strathmore, the choir’s first visit to that state in over a century.

“Strathmore is a wonderful acoustic hall,” Brother Anderson told the singers and musicians at a pre-tour meeting in the Salt Lake Tabernacle following the “Music and the Spoken Word” broadcast June 14. “I think it will really showcase your talents.”

From there, the choir and orchestra travel to New York, where they will perform at the Bethel Woods Center for the Arts in the Catskills. Comprising hundreds of acres, Bethel Woods includes the 37-acre field at the former dairy farm where the iconic 1969 Woodstock pop music festival was held. Bethel Woods is a fairly new outdoor venue; its inaugural concert season was in 2006.

The performers then proceed to Saratoga Springs for an appearance at the Saratoga Performing Arts Center on Monday, June 29. It is a return visit to this city for the choir and orchestra; they performed there in 2003.

At Carnegie Hall, the choir and orchestra will perform two concerts in the Stern Auditorium/Perelman Stage. This will be the choir’s seventh visit to New York City, the most recent in 2003.

The tour concludes in Boston with a concert in the Wang Theater.

“The Wang is a beautiful, beautiful hall, and I think you will really enjoy it,” Brother Anderson told the choir and orchestra members.

He said an effort had been made to book a performance at the famous Kennedy Center in Washington D.C. and Boston Symphony Hall but there was not enough space in either facility to accommodate the 360 choir members and 68 orchestra members who will be on the tour.

Audiences who are used to hearing the choir and orchestra perform locally free of charge might be interested to know that the East Coast concerts are paid admission, ranging from $15 at the lowest-priced venue to $200 at the highest-priced.

Some area residents and visitors in Salt Lake City got a taste of the tour performance lineup at separate free concerts June 16 and 18 in the Salt Lake Tabernacle, home base for the choir and orchestra.

“The reason why we we’re doing these two different programs is we have outdoor venues and we have indoor concert halls” on the tour, Brother Wilberg told the audiences. “Because of the way music is and how it communicates with and flows to a listener, we cannot do the same program outdoors that we are doing indoors.”

That presents a challenge, particularly to the singers and especially to those who have been in the choir two years or less or have never been on a tour.

“As a result, they have much more music not only to learn but to memorize,” he said. “This evening’s concert will help them.”

Selections to be performed, depending on the venue, include two Celtic hymns, including one familiar to LDS listeners as “Guide Us, O Thou Great Jehovah”; a “Music of the Masters” set that includes the majestic Charles Gounod composition, “Unfold Ye Portals” from the French composer’s oratorio “The Redemption”; the popular African Christmas piece Betelemehu; popular show tunes “Sunrise, Sunset” and “Climb Every Mountain;” and the signature pieces “Come, Come, Ye Saints” and “Battle Hymn of the Republic.”

Alex Boye, a former member of the choir and a solo recording artist in his own right, is featured in each concert, performing two selections. The tour entourage comprises 582 people, including performers, guests, and support staff. Three chartered passenger jets will transport them to their first stop in Maryland, and 11 buses will take them to the concert venues once they are on the ground.

For more information about the tour and about the choir and orchestra, visit the website www.mormontabernaclechoir.org/tour.