With the Book of Mormon as the course of study for Gospel Doctrine classes in 2016, the Sunday School general presidency hopes people read it on a daily basis, pray about it, and get closer to God.

“Our hope would be that people would read [the Book of Mormon] on a daily basis, pray about it, and, as a consequence, they would get closer to God than they’ve ever been in their lives.” —Brother Tad R. Callister, Sunday School general president

As the Church membership embarks this year in its study of the Book of Mormon in Sunday School Gospel Doctrine classes, “our hope would be that people would read it on a daily basis, pray about it, and, as a consequence, they would get closer to God than they’ve ever been in their lives,” Brother Tad R. Callister, Sunday School general president, said, alluding to a statement made by the Prophet Joseph Smith.

“A timeless element of the Book of Mormon that stands out for me is that through obedience you prosper,” Brother Durrant observed. “Oft times, we think of that as material prosperity. I think the message is that prosperity comes through enjoying an abundance of the Spirit, and throughout the Book of Mormon we watch that happen. As the people are obedient, they enjoy a greater outpouring of the Spirit of the Lord, and as the cycle tends to turn down, they learn that they lose the influence of the Holy Spirit, and we see the impact of that.” 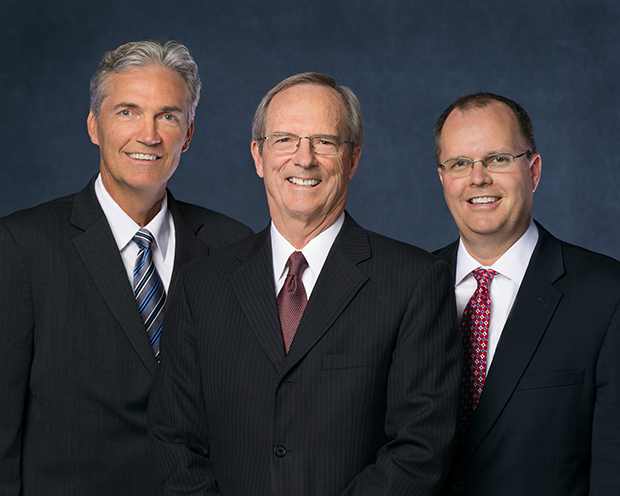 Brother Ashton said that for people living today, “there’s strength in feasting upon the Book of Mormon.”

Citing 2 Nephi 33, Nephi’s expressed desire that his words will be consecrated by the Lord for the spiritual benefit of people in the last days, he said, “It’s in the constant reading, studying, and application of the Book of Mormon that we receive a power into our lives that is palpable, and it changes us.”

That happened for him, he said, when he accepted President Gordon B. Hinckley’s challenge given to the Church in 2005 to read the Book of Mormon. He had just finished the book, and it took him a while to begin reading it again, he said, but as he did so, his desire to keep the commandments of God dramatically increased.

Brother Callister said one of his first spiritual experiences in life came when he was 16 and he was reading the Book of Mormon for the first time. As he came to the account of the 2,000 sons of Helaman, “there was a voice in my heart that said to me, ‘That story is true.’ I’ve always remembered that since my days as a young man.”

Entire chapters focus on Christ’s Atonement, Brother Callister said, citing 2 Nephi 9 and 10 and chapters in Jacob and Mosiah. “Maybe the greatest sermon we have on the Atonement anywhere is King Benjamin’s address,” he said. 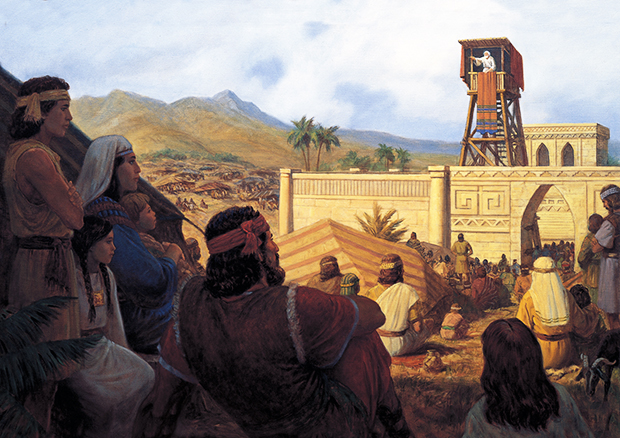 King Benjamin Preaches to the Nephites, by Gary L. Kapp. King Benjamin's address is one of the great discourses in the Book of Mormon on the Atonement, said Brother Tad R. Callister, Sunday School general president.

“These sermons teach us things you don’t really get from the Bible. They help us understand the Atonement can help us overcome weaknesses, that through the Atonement we can become like Christ. Those are deep, poignant, and incredible insights that only the Book of Mormon gives.”

Brother Durrant noted that in the account of the visit by the resurrected Christ to the Nephites, He outlines a pattern in teaching them the gospel, inviting them to ponder the things He has taught them and then to pray about them.

“We could maybe reverse that pattern and say that as we approach our study of the Book of Mormon, we start with a prayer, then we read, and as we go throughout the day and the week, we ponder the things we’ve prayed about and read,” he suggested. “As we read the Book of Mormon, it’s a way to prepare ourselves to march out into the world and face the challenges that confront us day to day.”

Reading and pondering is also a way to prepare in advance for the Sunday School Gospel Doctrine class experience, Brother Durrant said. “As we become familiar with the doctrine, we might have an opportunity to share our testimony with our brothers and sisters.”

Brother Ashton cited 1 Nephi 15:23–24, wherein Nephi discusses with his brethren the meaning of the vision that their father Lehi beheld of the rod of iron and the tree of life.

Noting that the iron rod represents the word of God, Brother Ashton said, “The word of God includes the Savior, the promptings from the Holy Ghost, the teachings in general conference. But it’s also the scriptures and, in particular, the Book of Mormon.”

Referring to the admonition to hearken, Brother Ashton said that means to listen and obey. “To hold fast to the word of God says to me that we should study the scriptures every single day. There are two remarkable promises to those who do so: that they will not perish and the fiery darts of the adversary will not overpower them to lead them away to destruction.”

“I struggled with that scripture for a long time, because I wondered how the words of Christ could tell me the things I should do. Can I go to the scriptures and find out who I should marry or what career I should pursue or who my counselors should be?

“I finally realized the scriptures, in particular the Book of Mormon, do two things that make it possible to answer all the questions in life we have. One is that it teaches the correct principles in life that decisions are based upon, and the other is that it invites the Spirit to help us use those principles in an inspired way. So, to me, the truthfulness of that passage came to me in a way that was personal and profound.”