Sunday School Counselor Wants to Inspire People to Be Better 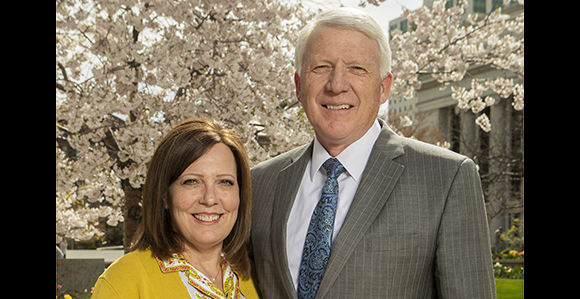 The first came as he read the prophet Alma’s words about planting seeds of faith in the Book of Mormon.

“I read that if you make room for that seed in your heart, it will grow, and you will actually feel these swelling motions,” Brother Newman said. “I remember reading that and the Spirit just testifying to me so strongly that it was true. I felt those swelling motions. I will never forget that as long as I live.”

On another night, Brother Newman sat watching the stars through a large window in the same room when he felt something he’d not felt before.

“For probably the first time in my life, I felt a little homesick for my heavenly home versus my home back in Nevada. I felt this great love from the Lord,” Brother Newman said. “That [room] in Strasbourg, France, became a little sacred place on my mission.”

Those two tender experiences helped solidify Brother Newman’s testimony of the gospel and helped to prepare him for a lifetime of service as a husband, father, and disciple in The Church of Jesus Christ of Latter-day Saints.

Brother Newman was sustained as Second Counselor in the Sunday School General Presidency in April 2019.

Jan Eric Newman was born April 16, 1960, in Jerome, Idaho, to George Raymond Newman and Dora Lillian Walker. He was raised in Overton, Nevada, in a home where his father was a convert and his mother was a multigenerational Latter-day Saint. His mother often reminded him that he was a descendant of Hyrum Smith, elder brother of the Prophet Joseph Smith. Knowing his heritage always motivated him to want to do good, he said.

Brother Newman’s testimony of the gospel of Jesus Christ developed at an early age as he attended seminary, where he read the Book of Mormon for the first time. This and other experiences prepared him to accept a call to serve as a full-time missionary in France and Belgium.

“I had some very remarkable spiritual experiences there that solidified all the things that I knew were true up to that point,” Brother Newman said of his mission.

Brother Newman was a student teacher in BYU’s French department. Lucia was one of several freshman students who wanted to add the class. As the first class period ended, about 20 students swarmed his desk asking to add the class. Through the crowd, Brother Newman saw Lucia and was immediately smitten. He reached over several people to grab her card and signed it first, he said.

“That is a beautiful girl. She is going to be in this class for sure,” Brother Newman said. “Everyone else was like, ‘What’s going on here?’”

Over the next two semesters, Brother Newman took a special interest in Lucia, who was only four years his junior. With permission from the department chair, he asked her out by claiming he owed her a milkshake for being a good French student.

The couple were married in the Oakland California Temple on August 18, 1984. They are the parents of six children and have eight grandchildren and reside in Elk Ridge, Utah.

Brother Newman considered becoming a teacher like his father and two brothers but changed his mind after substitute teaching. One day he was outside the library and saw an old mission friend. While chatting, the friend mentioned he was studying computer science, a growing field. It was 1981, and IBM had just come out with its first personal computer. It sounded promising, Brother Newman said.

“I got in, and that put me on a path toward a career that has been an amazing blessing for our family,” Brother Newman said.

A few years later, Brother Newman was hired at Novell and quickly advanced to become an executive vice president over a billion-dollar business at age 32, where he was personally mentored by Novell founder Raymond Noorda.

Brother Newman worked in the software industry in Utah as a serial entrepreneur for more than 30 years and in that time founded several successful software companies. He’s currently a partner at SageCreek Partners, a technology consulting company in Utah.

“When people ask us what we sell, we tell them ‘scar tissue and gray hair,’” Brother Newman said. “In other words, knowledge and experience.”

Through the years, Brother Newman has served in a variety of Church positions, including bishop, stake president, Scoutmaster, ward Young Men president, and temple worker.

From 2006 to 2009, Brother and Sister Newman were called to preside over the Nebraska Omaha Mission, an experience that both strengthened and unified their family, Sister Newman said.

“I’ve prayed for my family to be close and love each other. On our mission we were all in a new place and circumstances. We relied on each other, and it stayed that way after coming home,” she said. “That time together as a family was most precious.”

“We have had a lot of fun and done a lot of things together as a family, but I don’t know if there has been anything like our mission,” he said. “As far as the gospel is concerned, there is nothing that even comes close.”

Brother Newman’s call to serve as Second Counselor in the Sunday School General Presidency involved a series of humorous circumstances.

Lucia Newman was with family members at Disneyland when her husband received an “anxiety-filled” phone call inviting the Newmans to a short meeting with three members of the Quorum of the Twelve Apostles. Sister Newman returned home, and they attended the meeting, where they were asked if they could be considered for a calling with no guarantee of a call? That’s fine, they said.

When a couple of weeks passed with no word, Sister Newman flew back to California. Less than 24 hours after she arrived, she was again at Disneyland when her husband called to say she needed to come home again, which she did. He was called to serve in the Sunday School General Presidency with men he’d never met before. Two hours later, Sister Newman was on her way back to California for the third time.

The Newmans laugh about Sister Newman’s travel back and forth, but they were genuinely honored by the call to serve.

“It was a very sweet and sacred time,” Sister Newman said. “We felt the love of the Church leaders and the Savior.”

With a background in technology and teaching, Brother Newman is delighted to serve in the new Sunday School General Presidency.

“In business you are always trying to influence people for good,” he said. “I just love to have the opportunity to teach the gospel and will do my best to inspire people to be better.”