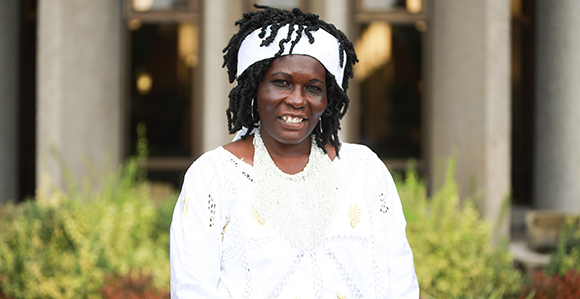 Karak Miakol, a native of South Sudan and a Latter-day Saint convert, has dedicated her life to providing educational and business opportunities to women in East Africa. Photo by Trent Hortin, BYU.

“I know that I am here for a reason—to help the rest of humanity.” —Karak Maikol, women’s advocate

Latter-day Saint convert Karak Denyok Miakol was far too young to understand the religious and tribal complexities of a civil war that brought death and fear to her Sudanese homeland.

But the war didn’t discriminate—it still eventually found the eight-year-old little girl and her village. Violence and desperation were everywhere. But for Karak, a short walk outside her home forever changed her life.

“I found the body of my uncle,” she told the Church News. “I knew that it was him because of the beads he wore around his neck.

The peril only escalated. Many in the Sudanese government regarded Karak’s tribe and family as abettors to a rebellion. Their home was burned, and the family was forced to flee their village, embarking upon a 41-day journey that ended in an impoverished Sudanese camp.

Young Karak had officially become an internally displaced person (IDP)—a refugee inside her own country.

Now an adult, educator, and women’s advocate, Miakol still marvels that she survived the horrors of her childhood.

“I know that I was protected by my Heavenly Father,” she said.

She was also sustained by helping out others—particularly many of her fellow Sudanese women who lacked the education needed to rise from chronic abuse and realize a measure of self-reliance and dignity.

On September 11, Brigham Young University’s Center for Conflict Resolution presented Miakol with its 2019 Peacemaker Award for her ongoing, decades-long efforts to advocate for and educate marginalized and imperiled women in Eastern Africa. The mother of five also spoke to a standing-room-only audience at BYU’s J. Reuben Clark Law School.

Miakol had been taught by her parents that she had a duty to look out for others. By the age of 16, she had become far too familiar with loss. She witnessed many at the IDP encampment die from disease and violence.

There was little she could do to foil Sudan’s civil war, but she could help the women around her learn to read and write—while mastering the basics of math and operating a small business.

She became a teacher to dozens of women, offering them the priceless gift of literacy.

“I taught them to accept that they were human beings with potential,” she said.

But still the unrest continued. Many believed Miakol’s efforts incited rebellion. They accused her of being a spy and promoting Western culture and beliefs. She was arrested multiple times and detained.

In 2013, Miakol escaped her captors by squeezing out of a small bathroom window. Knowing the Ugandan border was just a few miles away, she ran as fast as she could and avoided the main roads.

She was allowed into Uganda, where a human rights organization helped her apply for a visa to the United States. Years later, she still chokes back emotion remembering the moment she learned her application had been approved.

“That was when I knew I was safe,” she said. “I called my mother and told her I had the visa. My mother said, ‘That’s good. That’s good.’”

Miakol would eventually settle in Denver, a city with a sizable South Sudanese refugee community. But she did not forget the women who remained behind in East Africa.

“I did not want to be silent or to forget them.”

Miakol founded the Diar Rehabilitation Development Association (diar means “women” in her native Dinka language) to advance the rights of women and children in war-ravaged areas. Partnering with other international organizations, the association facilitates education, safety, and self-reliance for women in Sudan, South Sudan, and Uganda.

Miakol’s desires to serve others is also fueled by her Latter-day Saint beliefs.

In 2012, she met a Church member who was performing humanitarian work in Uganda. The two began discussing religion, and he gave her a copy of the Book of Mormon and the Doctrine and Covenants—along with his phone number and an invitation to call with any questions.

Two years later, while living in the United States, she felt prompted to call the number. Her friend answered.

“He connected me with the bishop in my area and the missionaries,” she said.

Soon after, she was baptized.

The principles of the gospel, she said, are anchored to the belief that everyone is a child of God and a member of a divine family.

She added, “And I know that I am here for a reason—to help the rest of humanity.” 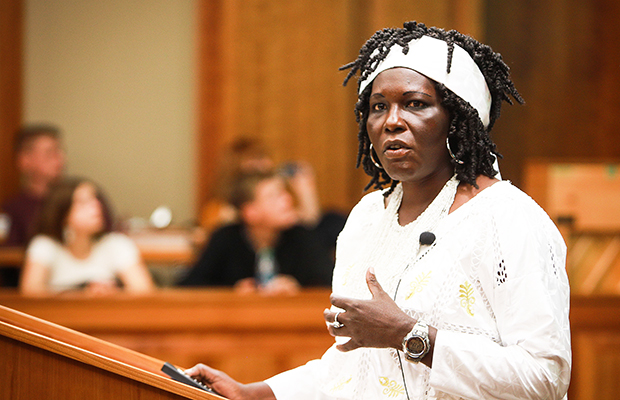