“The overall messages I was hoping to communicate were (1) that we should never let fear of not pleasing others, of failure, or of the future dictate our decisions and (2) that being a member of the Church and living the gospel will only make you better at whatever it is that you want to do.” —Mallory Everton, star of the hit BYUtv show Studio C

Under the direction of Frank Rodarte Jr., president of the Maple Valley Washington Stake in Washington State, stake and ward leaders put together a youth missionary devotional on April 27 featuring Mallory Everton, one of the stars of the hit television show Studio C on BYUtv. More than 700 people attended.

“The Maple Valley Washington Stake presidency has strongly taught and modeled the theme of ‘hastening the work of salvation,’” said President Rodarte. “My hope was to create an opportunity to invite nonmembers into our building. It was wonderful to have Sister Everton willing to host a devotional. The members and missionaries were excited and all came together to make it happen.”

David and Janet Dalling are stake cultural arts directors involved with the planning and production of the devotional. Brother Dalling said, “With the topic of hastening the work in mind, we thought it would be helpful for our youth and others to reach out to their friends with a pass-along card, inviting them to a Sunday devotional. Sister Dalling added, ”One of the youth in the stake said, ‘It was easy to invite nonmembers to an event that was by nature disarming to those who are not members of our Church. This special event was to go spend an evening with the star of a TV show.’”

With the help of full-time missionaries from the Washington Federal Way Mission, youth in the stake worked to get ready for the devotional. Missionaries spent about five minutes with youth quorums and classes to prepare them to invite others. They explained to the youth what a great opportunity it would be to invite friends with a pass-along card. Levi Palmer, a priest-age young man in the stake, invited nearly 20 members of other faiths to the fireside.

On the night of the devotional, the stake center was filled from the chapel all the way back to the stage in the cultural hall.

Sister Everton said, ”I just want people to know that Mormons can have fun, they can follow their dreams, they can be successful, and that telling yourself that being a member of the Church will hold you back from any of that stuff is just flat-out false.

“The overall messages I was hoping to communicate were (1) that we should never let fear of not pleasing others, of failure, or of the future dictate our decisions and (2) that being a member of the Church and living the gospel will only make you better at whatever it is that you want to do.”

Brother Dalling mentioned that one of the most uplifting parts of the devotional was a story Sister Everton shared. He said she mentioned a talk Elder David A. Bednar gave at the MTC a few years ago in which he said the most common question in the Church is “How can I tell when I’m being prompted by the Spirit?” His answer to the missionaries was: “Quit worrying about it. Quit fussing with it. Quit analyzing it. You be a good boy, you be a good girl, you honor your covenants, you keep the commandments, and I promise you in the name of the Lord Jesus Christ that as you press forward with faith in Christ, your footsteps will be guided. As you open your mouth, it will be filled, and you will be where you need to be, and most of the time, you will not even have any idea how you got there.”

As the devotional concluded, there was a concern by stake leaders that the youth might rush the pulpit in order to greet Sister Everton. A suggestion was made to have ushers positioned near the pulpit to prevent any problems. Sister Everton heard about this and suggested instead that she personally greet anyone who wanted to meet her.

As a consequence, after the devotional had concluded, all chairs were quickly put away and a line extended the entire length of the cultural hall in order to meet her. “The highlight of the experience was definitely getting to interact with all of the youth,” said Sister Everton. “I couldn't believe how many people came. I was so touched; sometimes it feels like no one even watches the show until you’re in a room of 700 people who make it abundantly clear that that must not be true.” 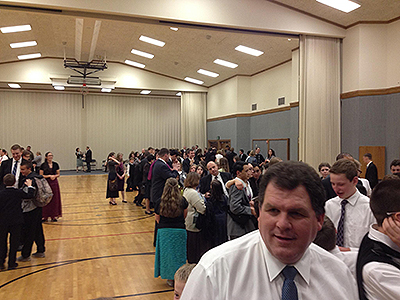 Maple Valley Stake members patiently wait to meet Sister Everton after the conclusion of the devotional. Photo by Janet Dalling.