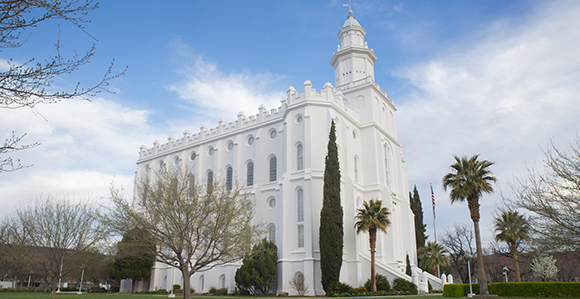 The St. George Utah Temple closed Saturday morning, May 12, after furniture and artwork was damaged when an individual broke into the temple and vandalized the fifth floor.

In response to the attack, Church spokesman Eric Hawkins issued the following statement:

“At approximately 5 a.m. this morning (Saturday), an individual broke a window and entered the St. George Temple. He then proceeded to the fifth floor of the temple, damaging furniture, artwork, and other items along the way. After causing additional damage on the fifth floor, he was contained by temple workers (no physical restraint was required) until police arrived and he was arrested.

”The damage is being addressed, but has required the closure of the temple. We are hopeful that normal temple operations will resume later today.“

Located on 250 East 400 South, in St. George, Utah, President Brigham Young presided at the dedication of the temple; President Daniel H. Wells of the First Presidency offered the dedicatory prayer.

“As we come to rededicate this lovely edifice—newly enlarged, cleansed, refurbished—our memories return to the beginnings when loyal, devout people, who were hardly settled from their long, painful, and distressing exodus across the plains, were again uprooted and sent to this desert place to colonize the valleys of the mountains and to build the first temple west of the Mississippi River,” said President Kimball during the prayer of rededication for the temple in 1975.