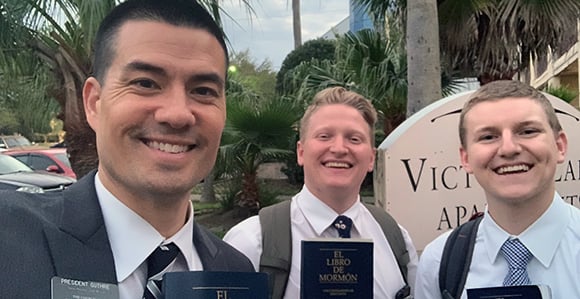 “One of the biggest differences between being a mission president and a baseball player is that as a ballplayer, you are accustomed to days off and off-seasons. … But in the work of the Lord—missionary work in particular—there are no off days. The work never slows down.” —Jeremy Guthrie, former MLB pitcher and mission president

Baseball great Joe DiMaggio once said he relishes his sport’s Opening Day “like a birthday party when you’re a kid. You think something wonderful is going to happen.”

For 15 seasons as a professional baseball player, President Guthrie would count down the final days of March leading up to Opening Day—the start of a new season, with all its possibilities.

“Spring training games would start around the beginning of March,” he told the Church News. “That was always an exciting time because you were able to get out, get to work, make sure all the moving parts are still functioning properly, and get ready for the season by competing against the other players.”

For pitchers such as President Guthrie, the days and weeks of March leading up to Opening Day are often defined by pressure.

“But I embraced the challenge of trying to do my best during that short window of time. You have about four weeks to audition—and sometimes even less—to show a team what you are capable of and to earn an opportunity to pitch in the Major Leagues.”

March of 2019 has been “completely different” for the 39-year-old who once started Game 7 of a World Series.

“One of the biggest differences between being a mission president and a baseball player is that as a ballplayer, you are accustomed to days off and off-seasons,” he said. “But in the work of the Lord—missionary work in particular—there are no off days. The work never slows down.”

Whenever he and his wife and missionary companion, Sister Jenny Guthrie, witness the missionaries working together, they are reminded of the camaraderie found in a well-oiled baseball team.

“Companionships often develop friendships that last forever because they spend so much time together, just like teammates in baseball,” he said.

For the Guthries, finding time together is tough in the mission field. Their three school-aged children are busy with their respective activities, and Sister Guthrie is usually the parent getting them to school and to other functions. Working with 140 full-time missionaries requires much of President Guthrie’s time.

“My wife joins me for all the conferences and trainings in the daytime, but she is home for the children when they get back from school.”

Houston, of course, is a Major League city, with the Astros playing at downtown Minute Maid Park. There’s plenty of buzz across “Space City” about the 2019 baseball season. President Guthrie is still a few weeks shy of his 40th birthday. He looks fit enough to step out of the bull pen and throw a few innings. But he’s not battling nostalgia as Opening Day approaches.

“I don’t have time to think about baseball,” he said. “I loved my career, and I love baseball. But I have a good ability to compartmentalize and move forward. When I retired, I was on to the next thing.”

But he still keeps a glove in his car and is always up to play catch with his children, the missionaries, or anyone else who wants to toss a baseball with a guy who has won a World Series ring (with the 2015 Kansas City Royals).

“One great guy from Kansas City recognized me and approached me,” he said. “He was a former college baseball player, so he came over one day and played catch and had a lesson with the elders. He’s become a friend.”

So does the pitcher-turned-president still possess a “live arm”?

Few full-time missionaries were once big-league ballplayers. But President Guthrie agrees that every elder and sister in his stewardship left behind opportunities and loved ones to serve the Lord. They are making precious sacrifices.

“The missionaries come out with so much faith and so much hope to bless and serve others,” he said. “It really speaks to this generation of young men and women who are willing to give up so much to come out and serve.”

Shortly after receiving his call as a mission president last year, President Guthrie told the Deseret News he was “living proof that the Lord likes to work with the simple and weak sometimes.”

As he and Sister Guthrie approach their first anniversary of missionary service in Houston, President Guthrie believes that statement stronger than ever before as they strive to support the missionaries and help them find correct answers.

“I’ve been humbled to a degree that I have never been in my entire life. ... I certainly feel even more simple and more weak than when I was called.” 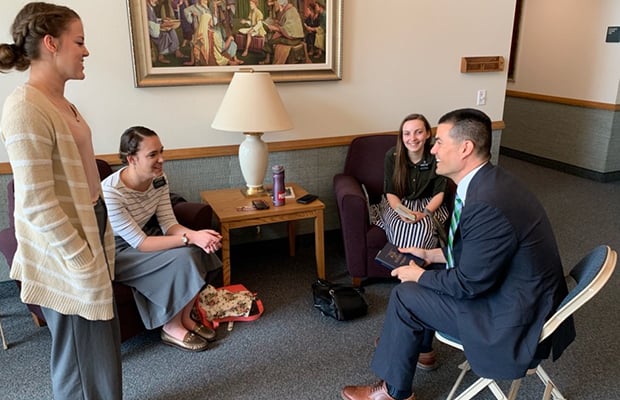