Richard E. Bennett gives a Sperry Symposium lecture on Martin Harris’s 1828 visit to New York to show a transcript of Book of Mormon characters to scholars.

“I believe we will continue to learn more that will corroborate the coming forth, the translation, and the divine authenticity of the Book of Mormon, and it’s exciting to be a part of it.” —Richard E. Bennett, chairman of Church history and doctrine at BYU

Students of Church history are acquainted with the incident when the Prophet Joseph Smith copied some of the characters from the plates from which he translated the Book of Mormon, and a translation of a portion thereof, and allowed Martin Harris to take them to “men of learning” in the East for their inspection.

According to Martin’s own account, one of the scholars who was shown the transcription, Charles Anthon of Columbia College in New York, pronounced the translation correct, more so than any he had ever seen, and wrote a note certifying that the characters were true.

But Martin reported that when told the plates came from an angel, the professor promptly tore up the certificate, denied the possibility of such a manifestation, and said Martin should bring the record to him. Martin said part of the plates were sealed, and Anthon replied, “I cannot read a sealed book.”

The response came to be interpreted as a fulfillment of a prophecy in Isaiah 29:11.

There is much more to the story of Martin’s journey to the East with the transcribed characters, according to research by Richard E. Bennett, chairman of Church history and doctrine at Brigham Young University, who was one of the speakers October 24 at the Sidney B. Sperry Symposium. Brother Bennett spoke on Martin’s visit not just to Professor Anthon during that journey, but also to Luther Bradish and Samuel Mitchell.

“It was likely Professor Samuel Latham Mitchell, thanks to the recommendation of both Luther Bradish and Charles Anthon himself, who gave the most scholarly corroboration Harris was looking for that winter of 1828,” he said. “Returning home to Palmyra with a story of prophecy fulfilled on the one hand and on the other, the sanctioning of all that Anthon may have said by America’s foremost naturalist [Mitchell], Harris was ready to provide the financial means to publish the Book of Mormon.”

Though many have assumed Martin went east primarily because he wanted scholarly validation of the translation efforts of Joseph, “there may have been other reasons for Harris to seek insights from scholars,” Brother Bennett said. “According to Joseph Smith’s earliest 1832 history, Martin Harris had received his own independent corroborative inspiration even before making the trip as a result of his giving Joseph $50 to move from Manchester, New York, to Harmony, Pennsylvania.”

The Prophet recorded that because of Martin’s faith and righteous deed, the Lord appeared to him in a vision and showed him a marvelous work he was about to do. Thereafter, he came to Harmony and said the Lord had shown him he must go to New York City with some of the characters.

“Perhaps there was as much compliance as there was corroboration involved in Harris’s making the trip to New York in 1828,” Brother Bennett remarked.

The Prophet’s mother, Lucy Mack Smith, recorded that it was agreed that Martin should take the characters to the East “and through the country in every direction” and on his way should call upon “all who are professional linguists to give them an opportunity of showing their talents in giving a translation of the characters,” Brother Bennett noted.

Until recently, the prevailing notion was that a document now housed in the archives of the Community of Christ in Independence, Missouri, is the actual piece of paper shown by Harris to Anthon and others in New York. Letters recently found from Anthon indicate “it is virtually impossible to argue with certainty” that the transcript in Independence is the only one Anthon saw, Brother Bennett said. Moreover, recent research stemming from the Joseph Smith Papers project and based on handwriting analysis shows that the extant manuscript was likely not written by Joseph in 1828 but by John Whitmer in 1829 “and therefore could not have been the one displayed in New York City,” he added.

Contemporary reports indicate that on his journey, Martin first stopped off at Albany, New York, where he met with Luther Bradish, Brother Bennett said.

Bradish and Martin Harris knew each other in Palmyra. Bradish had become a successful Wall Street lawyer and New York assemblyman and was in a position possibly to assist in the cost of printing the Book of Mormon.

“But there is no indication Bradish pledged any kind of financial support,” he said. “Instead, Bradish likely recommended, since he knew the city so well, that once in New York City, Harris visit with the leading naturalist in the country, Professor Samuel L. Mitchell.”

A brilliant scholar, Mitchell was also a linguist. “Before offering his learned opinion on the written characters which Harris brought with him, Mitchell kindly referred him to his colleague, the young and up-and-coming scholar of linguistics” Charles Anthon, Brother Bennett said.

Anthon, however, though he was accomplished in the classic languages of Greek and Latin, likely knew little about Egyptian, Hebrew, or any other Middle Eastern language, Brother Bennett said. “By force of his own brusque personality, he claimed to know more in this area than he really did.”

He said, “After Anthon showed Harris the door, Mitchell welcomed him back and sanctioned what Harris showed him for at least two reasons.”

Mitchell was the country’s leading student of the Rosetta Stone, an ancient stele with writing in three languages that had earlier been discovered and decoded. Thus Mitchell had an intense interest in hieroglyphic writing. And Mitchell had been studying the origins of the American Indians for several years and “had painstakingly developed his own two-races theory of ancient America,” Brother Bennett said. “His interest in the history of the ancient American Indian was therefore at a peak when Harris showed him this transcript.”

Brother Bennett concluded by testifying that “the Lord is continuing to open new things to our understanding, new insights, ‘line upon line, here a little and there a little.’ I believe we will continue to learn more that will corroborate the coming forth, the translation, and the divine authenticity of the Book of Mormon, and it’s exciting to be a part of it.” 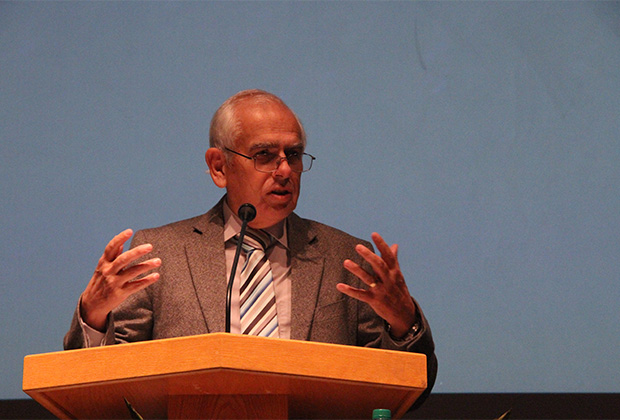